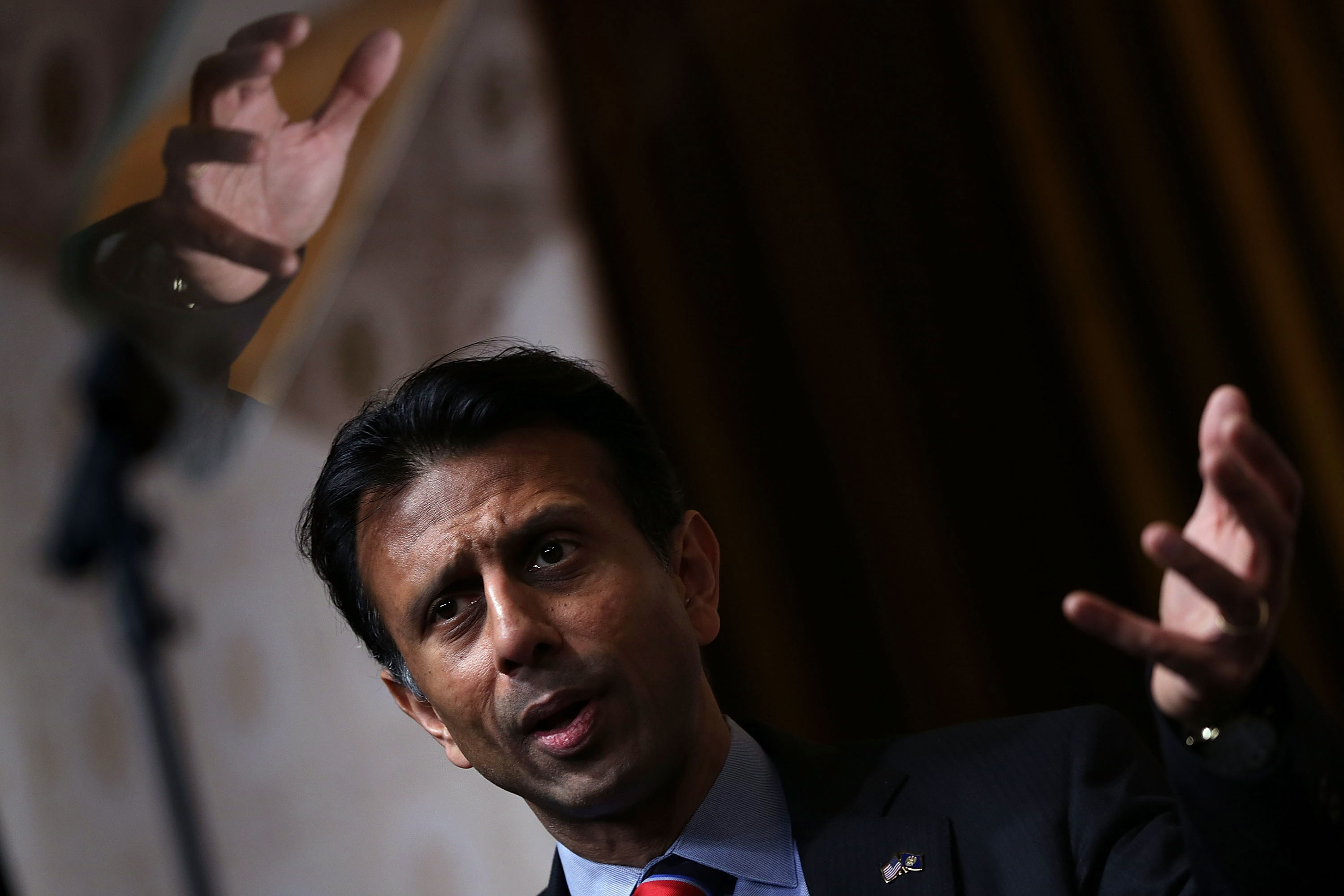 The website features several hidden camera videos of Jindal and his wife, Supriya informing their three children, Selia, Slade, and Shaan, of the decision.

"Mommy and daddy have been thinking and praying about this a lot," Jindal tells his family as they're seated around a patio table. "We wanted to talk to you first...We have decided we are going to be running for president this year."

After the Jindal children offered an unsurprised reaction, Jindal asked, "You already figured it out?"

If so, they're in good company - Jindal hasn't been shy about his interest in a presidential bid, and many observers have long since concluded he would run. With a nettlesome state budget dispute in his rearview mirror, the two-term governor of Louisiana apparently decided it was time to kick the tires.

Jindal held his formal kickoff rally early Wednesday evening outside of New Orleans. In his speech, he touted his record in Louisiana, recalling the dire situation the state was in when he took over in 2007.

"It was the aftermath of Katrina, our economy was locked in a downward spiral, our biggest city was reeling, and for 25 straight years more people had left this state than had moved into it. Louisiana was in big trouble," he said. "So we had to make big changes. We had to believe in Louisiana Again. And that is exactly what we did."

He cited ethics reform, hospital privatization, and education reform. He particularly emphasized his success in reducing the size of government, noting, "We cut our budget by 26 percent. We cut the number of government bureaucrats by more than 30,000."

That record, Jindal said, distinguishes him from the other 12 Republicans running for president.

"Every Republican will say they will fight to protect the unborn, repeal Obamacare, secure the border, and destroy ISIS. I won't simply talk about these things, I will do these things," he added.

Jindal took numerous shots at Democratic frontrunner Hillary Clinton, whom he labeled President Obama's "apprentice-in-waiting," during his speech. He also offered an extended ode to the importance of religious liberty, signaling that he plans to court the votes of Christian conservatives.

"Christianity is under assault today in America. But the liberals have forgotten their history. Religious liberty is not some quaint notion from the past. It is fundamental to our freedom. That's why it is protected in the First Amendment to the Constitution," he said. "I'm going to say this slowly so that even Hillary Clinton can understand this. America did not create religious liberty, religious liberty created the United States of America."

He also took a shot at former Florida Gov. Jeb Bush, who's emerged as an early-but-shaky favorite among the GOP establishment.

"You've heard Jeb Bush say that we need to be willing to lose the primary in order to win the general election," Jindal said. "Let me translate that for you, I'm going to translate that from political-speak into plain English. He is saying that we need to hide our conservative ideals. But the truth is, if we go down that road again, we will lose again."

Jindal has, for years, been touted as a rising star in his party. In 2001, he was appointed Assistant Secretary of Health and Human Services under President George W. Bush, and in 2005, he became the second Indian-American elected to Congress, serving in the House of Representatives through 2008. He later became the first Indian-American elected governor in U.S. history in 2007, and he won a resounding reelection in 2011.

A son of immigrants, Jindal's heritage made him a rock star virtually overnight in a party that's struggled to project diversity. He noted his parents' immigration story in his kickoff speech.

"My dad grew up in a house without electricity or running water, and he was the only person in his family to get past the 5th grade," he said. "He and mom came to Louisiana because they believed in America."

Despite his prominence, Jindal's time on the national stage hasn't always been an easy ride. There was his awkward response to President Obama's 2009 State of the Union, which was panned by Republicans and Democrats alike and birthed more than a few comparisons between Jindal and Kenneth the Page, a lovably dopey character on NBC's "30 Rock."

There's also the matter of his slipping approval ratings in Louisiana, and whether they might undermine Jindal as he steps onto the national stage.

With 12 other Republicans competing for the nomination (and at least three others on the cusp of announcing a bid) Jindal has his work cut out for him on the campaign trail. He's currently languishing at the rear of the pack in early primary polls.

He's sought to distinguish himself, in part, by offering a series of substantive policy reform proposals through his think tank, "America Next." They've tackled everything from health care policy to defense policy. In his speech, Jindal offered a brief preview of his prospective presidential agenda.

"As President I'll have four objectives," he told the crowd. "I will secure our borders. I will replace Obamacare with a health care system that focuses on reducing costs and restoring freedom. I will grow the private sector economy by shrinking the size, scope, and reach of the federal government; And I will rebuild America's defenses and restore our standing on the world stage."

"If you are looking for a candidate who will politely manage America's descent into mediocrity, I'm not your man. But if you are chasing a dream and looking for a land where the people are free, and the opportunities are real, I'm asking you to believe," he concluded. "Believe in what we can do. Believe in what America can do."