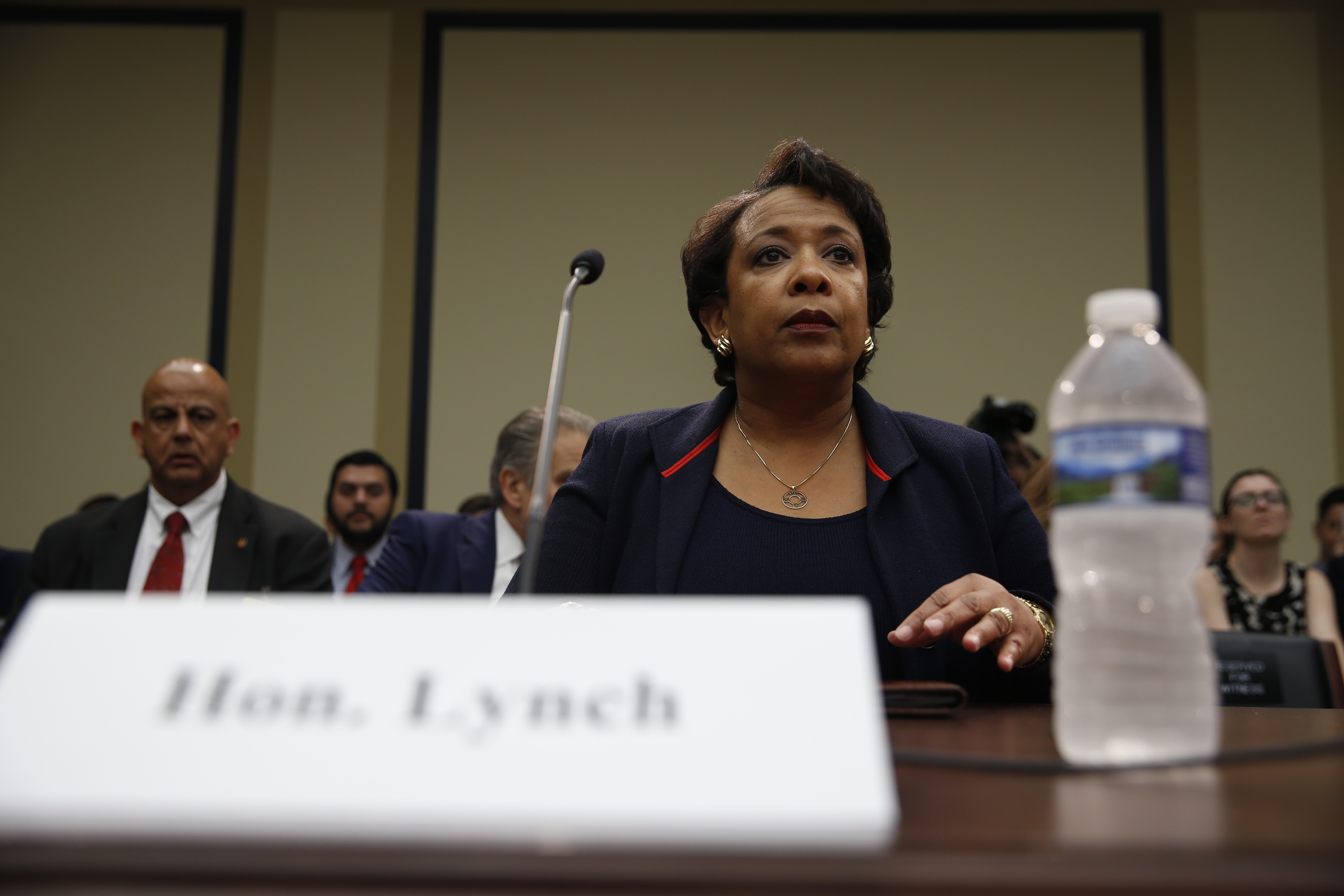 The hearing has ended after about 5 hours in session and two recesses.

Lynch is asked by a Republican lawmaker if she would rule out serving in a Hillary Clinton administration, but she declines to comment.

Rep. Hakeem Jeffries, D-New York, blasted Republicans for focusing only on Clinton's emails during the hearing and not on gun violence plaguing the U.S.

"This is not a legitimate hearing," he said. "It's a fishing expedition. It's a reckless legislative joyride designed to crash and burn."

Attorney General Loretta Lynch is saying under questioning that she uses only her government email account to conduct official business and that she does not send or receive classified information using that system.

Lynch was asked about her email practices by Rep. Trey Gowdy, a South Carolina Republican, during a House Judiciary Committee hearing on Tuesday.

Gowdy and other Republicans have raised concerns that the decision not to prosecute Hillary Clinton reflects a double standard in the criminal justice system. They say other government officials would have been prosecuted if they handled classified information like Clinton did, but federal officials say that's not true.

Gowdy also asked why the Justice Department could not prosecute Clinton for "gross negligence," part of the law's standard.

Rep. Bob Goodlatte of Virginia halted a hearing and told Lynch that her refusal to discuss the investigation represented an "abdication of your responsibility."

Lynch last week announced that no charges would be brought, saying she was accepting a recommendation by FBI Director James Comey.

After Goodlatte spoke, Lynch faced aggressive questioning from Republican Jim Jordan of Ohio, who said Lynch "made a bad situation worse" by saying that she would accept the FBI's recommendations without even knowing that they would be.

He said "you showed this case was different," creating a double standard.

11:45 a.m. Rep. Steve King, R-Iowa, asks Lynch if there were any implications during her recent conversation with former President Bill clinton regarding investigations into the Clinton Foundation or investigation into Clinton's email server.

"No, sir, there was not," Lynch said. "There was nothing about any investigations or any specific cases."

Asked when she learned about her meeting with the former president, Lynch said she had just landed on a tarmac and was ready to disembark from the plane and learned that he wanted to say hello.

"My husband was with me during our conversations," Lynch said, and added she believes there were members of the flight on board.

Rep. Darrell Issa, R-California, asked Lynch if there were political appointees on the team that investigated Clinton's email server use.

Lynch didn't directly answer, but said, "All of them were career lawyers and seasoned investigators."

Rep. Steve Chabot, R-Ohio, asks Lynch if she believes Clinton lied in the course of the investigation into her use of private email servers.

Lynch deflected and said that Comey provided unprecedented access to his opinion of what occurred and she said, "I refer you to them."

She repeated Comey's claim that no charges had been brought in cases similar to Clinton's.

Lynch reiterated that she had previously decided to accept the recommendation that the FBI would make to the Justice Department regarding Clinton's email server use as secretary of state.

She said she reiterates her "pride and faith" in her team at the Justice Department.

"There was no intentional wrongdoing," in the email case, Conyers maintained.

"Comey has explained his reasoning in great detail," he said. If any of my colleagues are not convinced, it's because they don't want to be convinced."

Lynch has just arrived and is seated. Chairman Bob Goodlatte, R-Virginia. He mentioned the Dallas shootings in his opening statement, as well as the shootings in Lousiana and Minnesota last week. Goodlatte called for a moment of silence to recognize the victims.

The American people expect government officials to abide by the law -- "that is not the case" for Hillary Clinton, Goodlatte said, referring to the decision not to recommend prosecuting her.

He also brought up Lynch's meeting with Bill Clinton, which he called "troubling," in light of the investigations into Hillary Clinton's email server and into the Clinton Foundation.

The decision by the FBI not to recommend charges against Clinton, in light of her actions "defies logic and the law," Goodlatte said. "Her 'extreme carelessness' suggests she can't be trusted with the nation's most sensitive secrets," the chairman said.

Attorney General Loretta Lynch is expected to face questions on policing and the Justice Department's decision not to bring charges against Hillary Clinton over her use of private email while she was secretary of state, in a hearing before the House Judiciary Committee Tuesday morning.

She can also expect to be asked about her unscheduled tarmac meeting in Phoenix with former President Bill Clinton in the week before the FBI announced that Clinton would not be charged. This is her first appearance before Congress since the outcome of the FBI investigation was announced.

Lynch herself will waste no time in bringing up the violence of the past week -- it will come up in her opening statement to the committee.

Americans' sense of safety "has been shaken by the series of devastating events that rocked our nation last week: the tragic deaths of Alton Sterling in Louisiana and Philando Castile in Minnesota, and the deplorable murder of five brave Dallas police officers - Lorne Ahrens, Michael Krol, Michael Smith, Brent Thompson, and Patrick Zamarripa, who were protecting a peaceful protest, along with several of their comrades who were wounded," Lynch will say, according to her prepared remarks.

The nation's top law enforcement official will aslo bring up efforts to keep Americans safe, reminding the panel that a month ago, "forty-nine innocent Americans were killed in an attack on the Pulse 2 nightclub in Orlando - an appalling act of terror and hate that underscored the urgency of confronting threats to our nation wherever they emerge and whatever form they take."

"There is no responsibility that this department takes more seriously," she will tell the committee.
"We are moving aggressively against those who seek to receive training from, or are inspired by, foreign violent extremist groups, and we have arrested more than 90 individuals since 2013 for conduct related to foreign fighter activity and homegrown violent extremism."