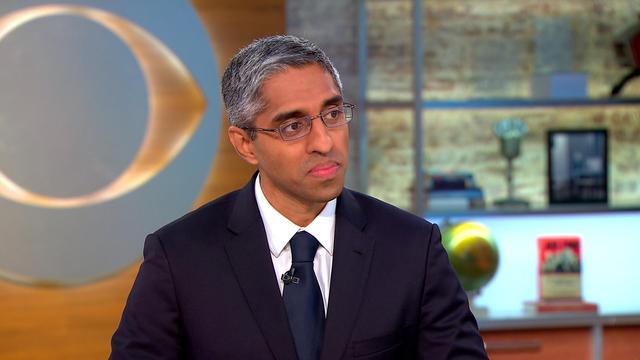 Former Surgeon General Dr. Vivek Murthy has tackled a range of public health crises including Zika, drug and alcohol addiction and obesity. Now, he's shedding light on a silent crisis: the rising number of lonely people in America. He believes it is a growing threat to our health and well-being.

"I have met have thousands of friends on Facebook but find few people who really know them. As a society, we have built stronger Wi-Fi connections over time, but our personal connections have deteriorated," Murthy said at the Aspen Ideas Festival last year.

Murthy told "CBS This Morning" Thursday that he himself struggled with loneliness as a child.

"It's something I never even talked to my family about. But when I was a child I was very shy, it was hard for me to make friends and I felt lonely a lot, but I felt ashamed to tell people," Murthy said. "For many people including myself as a child, admitting you're lonely is essentially the equivalent to admitting that you're not worthy of being loved."

Murthy says data is showing that loneliness is a lot more prevalent than previously thought. According to the Harvard Business Review, 40 percent of U.S. adults report feeling lonely. He attributes some of this to the record numbers of people who live alone today, but places more blame on technology.

"Technology can help or hurt, it's simply a tool but for too many people technology has led to substituting online connections for offline in-person connections and ultimately I think that has been harmful," Murthy said.

The culture around masculinity may actually be putting men at a higher risk of loneliness than women, Murthy said.

"We think that masculinity is tied to being self-sufficient and not expressing your emotions and certainly not admitting to feelings of loneliness. But many men do feel lonely – especially after they get married or have children where their social circles narrow," he said.

Adding to concerns about this "epidemic" is the toll it may take on our health.

"It turns out that loneliness is associated with a reduction in your lifespan that is as severe as the lifespan you see with smoking 15 cigarettes a day," he said. "We evolve to be social creatures and thousands of years ago if you were connected to other people you were more likely to have a stable food supply and to be protected from predators. So when you're disconnected, you're in a stress state. When that happens chronically, it can have a profound impact on your health."

As a way to help combat this trend, Murthy said workplaces should consider providing dedicated time in structured settings for people to get to know one another.

"What are their values? What drives people? What are their experiences and inspirations and what are their lives outside of work? People hunger to be known authentically and far too many people feel invisible right now, and that is that the crux of our loneliness epidemic right now," he said.

"The fundamental thing is this: We have for years thought about ourselves as an individualistic society that champions individual achievement but what the data around loneliness tells us more and more is we're truly interdependent creatures and ultimately we need each other."