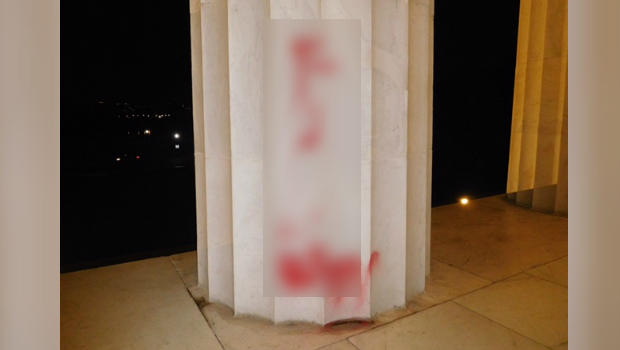 National Park Police (NPS) said they are working to remove graffiti from the Lincoln Memorial that was discovered before dawn on Tuesday.

"[Expletive] law" was written in red spray-paint on one of the columns.

A monument preservation crew is using a mild, gel-type paint stripper that is safe for use on historic stone, CBS affiliate WUSA-TV reports. The crew will evaluate after each application, but treatments will be applied as necessary until all of the graffiti is gone.

Another act of vandalism in silver spray paint was discovered on a Smithsonian wayfinding sign in the 1400 block of Constitution Avenue, the NPS told WUSA-TV.

In Baltimore, a Confederate monument was vandalized with red paint, CBS Baltimore reports.

The vandalism comes among heightened tensions across the country after a white nationalist rally in Charlottesville, Virginia, turned violent. An rally attendee, James Alex Fields Jr., 20 has been charged with second-degree murder and other counts after allegedly deliberately plowing a car into a group of counter-protesters, killing one woman.

President Trump's reaction to the violence has been criticized. Mr. Trump initially blamed "many sides" for the violence, and then on Tuesday doubled down on the statement, saying the "alt-left" was responsible as well. Mr. Trump has been accused -- even by top members of his own party -- of failing to call out the white supremacists who started the violence.

There have been protests nationwide in response to the violence and Mr. Trump's reaction. In Durham, North Carolina, protesters toppled a statue of a Confederate soldier.

Meanwhile in Boston, a 17-year-old boy was arrested for allegedly throwing a rock at the Holocaust Memorial.