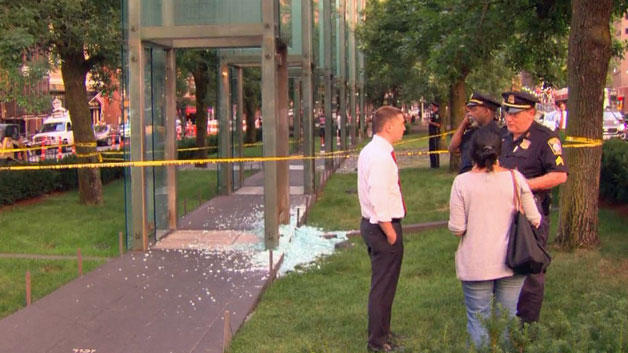 BOSTON -- For the second time this summer, the Holocaust memorial in Boston has been vandalized.

Boston Police say a 17-year-old boy from Malden allegedly threw a rock at the memorial around 6:30 p.m. Monday and smashed a glass panel.

"I saw this guy running around the corner dressed in all black," one witness told CBS Boston. "It was a dozen people chasing him. The world's gone crazy."

The suspect was detained by two bystanders until police arrived at the scene. Witnesses said they heard the suspect ranting incoherently.

"I'm grateful for the quick response and the community help, which led to the swift arrest of the suspect responsible for the damage done to the Holocaust memorial," Boston Police Commissioner William Evans said.

"Clearly, this type of behavior will not be tolerated in our city," he said. "And, in light of the recent events and unrest in Charlottesville, it's sad to see a young person choose to engage in such senseless and shameful behavior."

Over the weekend, an attack after a violent white nationalist rally in Charlottesville claimed the life of a woman and injured 19 others.

The teen's name has not been released. He will be charged with the willful and malicious destruction of property. The Boston Police Civil Rights Unit is also investigating to determine if additional charges are pending.

The panels on the memorial's six towers are etched with millions of numbers that represent tattoos on the arms of the Jews murdered by the Nazis.

Boston Mayor Marty Walsh said he was saddened to see "such a despicable action in this great city."

The memorial was rededicated in July after a 21-year-old man who authorities say suffers from mental illness threw a rock through one of the panels.

"And now that this has happened twice in one summer it cannot be a coincidence," said Jeremy Burton of the Jewish Community Relations Council.

Burton's group oversees the memorial and points to the weekend's neo-Nazi violence in Virginia and fears a disturbing trend.

When the memorial was built more than 20 years ago, the organizers knew vandalism was possible and they created extra panels.

"It's horrific, it's terrible," one man visiting from Miami told CBS Boston. "You come here to pay your respects. You don't want to be reminded about the hate and evil."

When the glass was shattered in June, it was replaced in just two weeks. The pane smashed Monday is bigger and might take longer.