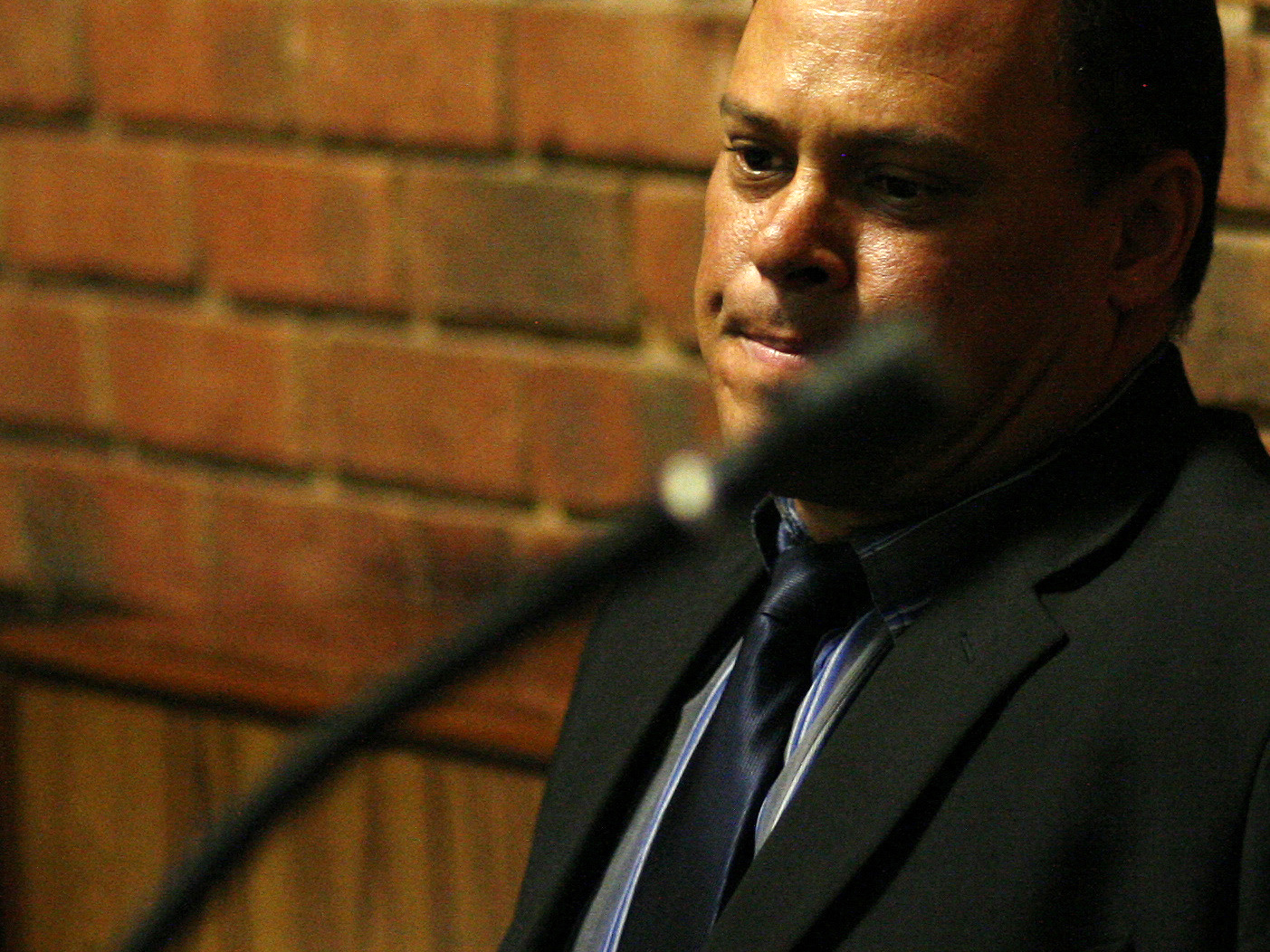 PRETORIA, South Africa Prosecutors reinstated attempted murder charges against a policeman leading the murder investigation into world-famous athlete Oscar Pistorius, in the latest twist in a case that has captivated South Africa and threatens to bring down a national idol.

The announcement that detective Hilton Botha faces reinstated charges in connection with a 2011 shooting incident came a day after he testified for the prosecution in Pistorius' bail hearing, and by all accounts bungled his appearance. He acknowledged Wednesday that nothing in Pistorius' account of the fatal Valentine's Day shooting of his girlfriend contradicted what police had discovered.

The spokeswoman for the nation's prosecutors urged that Botha be removed from the Pistorius case.

Pistorius, an Olympian whose lower legs were amputated when he was less than a year old, claims he mistook girlfriend Reeva Steenkamp for an intruder when he shot her in a locked bathroom in his home.

Botha, the lead investigator, conceded Wednesday that police had left a 9 mm slug in the toilet where Steenkamp died, had lost track of illegal ammunition found in the home and that Botha himself had walked through the scene without protective shoe covers, possibly contaminating the area.

Botha's often confused testimony left prosecutors rubbing their heads in frustration as he misjudged distances and said testosterone -- banned for professional athletes in some cases -- was found at the scene, only to be later contradicted by the prosecutor's office.

Emma Hurd, reporting for CBS News from Pretoria, reports that the case against Pistorius has been seriously weakened by the police blunders.

The prosecution has also struggled to show that the athlete is a flight risk or poses any serious threat if he's granted bail, so he could be freed to await his trial, Hurd reports.

Bulewa Makeke, spokeswoman for South Africa's National Prosecuting Authority, acknowledged Thursday that the timing of the attempted murder charges against Botha is "totally weird" but said Botha should be dropped from the case against the world-famous athlete.

However, Makeke said the charges against Botha were reinstated on Feb. 4, before his testimony Wednesday and even before Steenkamp was killed. Police said they were notified Wednesday of the reinstated charges which stem from a 2011 shooting incident in which Botha and two other officers allegedly fired at a minibus.

Makeke indicated the charge was reinstated because more evidence had been gathered. She said the charge against Botha was initially dropped "because there was not enough evidence at the time. But then, obviously the investigation continued up to the fourth (of) February and the senior public prosecutor was in a position to make a decision to reinstate the case."

She emphasized that it is a decision for police and not prosecutors whether to take Botha off the Pistorius case, one that has riveted the world's attention and is bringing scrutiny on South Africa's justice system.

"Is he going to be dropped from the case? I don't know. I think the right thing would be for him to be dropped," Makeke said outside Pretoria Magistrate's Court shortly before Pistorius' bail hearing went into a third day. "Obviously there will be consultations between the two (police and prosecutors) to determine what is the best course of action."

Pistorius' main sponsor Nike, meanwhile, suspended its contract with the Paralympic champion, following eyewear manufacturer Oakley's decision to suspend its sponsorship Monday. Nike said in a brief statement on its website: "We believe Oscar Pistorius should be afforded due process and we will continue to monitor the situation closely."

Botha was summoned by the magistrate at the start of Thursday's proceedings. Pistorius' bail hearing began on Tuesday and is already running behind schedule, with it expected to have been completed on Wednesday.

Chief Magistrate Desmond Nair asked the defense: "Do you think there will be some level of shock if the accused is released?"

Defense lawyer Barry Roux responded: "I think there will be a level of shock in this country if he is not released."

"It seems to me like there was a lack of urgency," Nair said as the efficiency of the police investigation was again questioned after Botha conceded to the string of blunders on the second day of the hearing.

They did not discuss anything relating to the attempted murder charges against Botha and if he should continue on the case. Police say that Botha and two other police officers fired at a minibus they were trying to stop, and will appear in court in May to face seven counts of attempted murder.

Pistorius, in the same gray suit, blue shirt and gray tie combination he has worn throughout the bail hearing, stood ramrod straight in the dock as the magistrate arrived Thursday and then sat calmly looking at his hands as Roux picked apart the prosecution's argument. On Tuesday and Wednesday, the athlete was slumped over and sobbing uncontrollably at times as detail was read out of how Steenkamp died in his house.

Roux continued to cast doubt on the state's case and the investigation.

"The poor quality of the evidence offered by investigative officer Botha exposed the disastrous shortcomings of the state's case," Roux said Thursday. "We cannot sit back and take comfort that he is telling the truth."

Roux also raised issue of intent, saying the killing was not "pre-planned" and referred to a "loving relationship" between the two.

He said an autopsy showed that Steenkamp's bladder was empty, suggesting she had gone to use the toilet as Pistorius had claimed. Prosecutors claim Steenkamp had fled to the toilet to avoid an enraged Pistorius.

"The known forensics is consistent" with Pistorius' statement, Roux said. The lawyer said the evidence does not even show Pistorius committed a murder.

Botha also testified earlier Thursday that he had investigated a 2009 complaint against Pistorius by a woman who claimed the athlete had assaulted her. He said that Pistorius had not hurt her and that the woman had actually injured herself when she kicked a door at Pistorius' home.

Botha was only questioned for 15 minutes before he was excused by Nair, but South Africa's prosecuting authority and the police still had to make a decision over whether the 24-year police veteran would be removed from the investigation because of the charges against him.

In summing up the defense argument in the bail hearing, Roux asked that bail restrictions be eased for Pistorius, who then began crying softly.