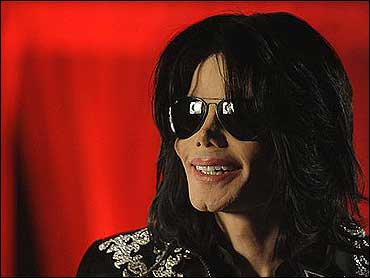 Michael Jackson, the sensationally gifted "King of Pop" who emerged from childhood superstardom to become the entertainment world's most influential singer and dancer before his life and career deteriorated in a freakish series of scandals, died Thursday. He was 50.

Jermaine Jackson, Michael Jackson's brother, gave a press conference in Los Angeles Thursday afternoon. He said that his brother died at 2:26 p.m. local time, and it is believed that Jackson suffered cardiac arrest in his home, but that the cause of death is unknown until they received the results of an autopsy.

Jackson's personal physician tried to resuscitate him at his home, as did the paramedics, Jermaine Jackson said. Then at the hospital, doctors tried to revive him for more than an hour, but were unsuccessful.

"We will be with you Michael, always," Jermaine Jackson said.

What Happens To Jackson's Kids?

The Times also reported that law enforcement sources said that Los Angeles Police Department robbery-homicide detectives have opened an investigation into the death, though they stressed there is no evidence of criminal wrongdoing. The detectives plan to interview relatives, friends and Jackson's doctors to try to figure out what happened. The L.A. County coroner's office will determine a cause of death.

The coroner's office received Jackson's body Thursday evening. They anticipate performing the autopsy Friday morning, but the final cause of death will not be conclusive because they need time to conduct toxicology and tissue studies.

Earlier Thursday evening, with speculation reaching a fever pitch, the Times cited city and law enforcement sources as saying Jackson had been rushed to hospital by paramedics and was not breathing when they arrived at the sprawling mansion where he'd been staying.

Jackson family attorney Brian Oxman, who said he had worked with the family for 20 years, said that Michael Jackson had been "using medicine for quite a while."

"I have warned," Oxman said. "These enablers around have done this."

Word of the sudden emergency, fuelled by rampant media speculation about the possibility of Jackson's death, brought a swarm of news helicopters to the air above the hospital and a growing mass of people on the grounds outside.

"We've seen a lot of people crying, a lot of fans," Tracy said. "Weirdly enough, there is a fraternity house across the street that is actually playing Michael Jackson music right now which has led to a kind of surreal environment."

With his unforgettable catchy Jackson Five tunes and incredible stage presence, the public has been infatuated with the shining child star turned awkward adult, who reached international superstardom. As soon as Jackson glided across the stage with his signature moonwalk dance, it was all over from there - fans were immediately hooked.

His album "Thriller," released in 1982, was a chart-topper that set the bar for pop music.

In recent years, however, the pop icon has become more of a recluse and somewhat of a lost soul.

Headlines about Jackson were no longer about his music; instead there were stories of plastic surgery and strange behavior. He dangled his baby from a balcony and most damaging to his image was his 2005 trial for child molestation.

CBS News correspondent Bill Whitaker reports that Jackson's 1982 album, "Thriller" still is the top-selling album of all time, and Jackson was the top performer in the world through much of the 1980s. But somewhere along the way, Jackson went from the King of Pop to Wacko Jacko. Some say it started with an accident during the filming of a TV commercial that burned his scalp severely and led to a dependence on prescription pain killers. He became an increasingly reclusive and odd figure. He was married briefly to Elvis Presley's daughter, then to his skin doctor's assistant. He was a father of three, despite ongoing speculation that they could not be his natural children.

The King of Pop had been plagued by financial, legal, and medical woes for years and had not performed a major concert since 2001. His last studio album was released the same year.

A previous attempt to relaunch Jackson's career collapsed amid reports of ill health and court action.

In recent years, there have been several sightings of Jackson looking frail.

In 2005 during his molestation trial, he famously appeared in pajamas after being rushed to the hospital, one of four such visits during the trial.

Jackson has kept a largely low profile in recent years but in March, he announced he would perform a series of London concerts scheduled for July.

Famed music producer Quincy Jones, who produced "Thriller," called Jackson a "little brother," and wrote, "He had it all - talent, grace, professionalism and dedication. He was the consummate entertainer and his contributions and legacy will be felt upon the world forever."

"I am so very sad and confused with every emotion possible," Presley said. "I am heartbroken for his children who I know were everything to him and for his family. This is such a massive loss on so many levels, words fail me."

On Twitter, rapper Ludacris said, "If it were not for Micheal Jackson I would not be where or who I am today. His Music and Legacy will live on Forever. Prayers to the fam R.I.P." (Twitter was not edited).

In New York's Times Square, a low groan went up in the crowd when a screen flashed that Jackson had died, and people began relaying the news to friends by cell phone.

"No joke. King of Pop is no more. Wow,'' Michael Harris, 36, of New York City, read from a text message a friend sent to his telephone. "It's like when Kennedy was assassinated. I will always remember being in Times Square when Michael Jackson died.''