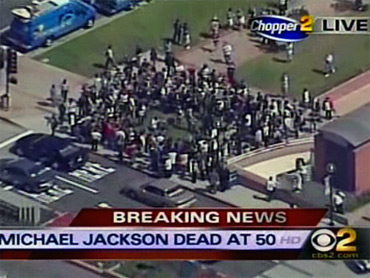 As news of Michael Jackson's death spread through out Los Angeles - and the country - hundreds of fans turned out to pay tribute to the pop icon.

The crowd outside the UCLA medical center numbered in the hundreds and was still growing as of 7:45 p.m. ET Thursday. Police were on the scene to control the crowd and keep it from spilling into the roadway. Many fans remained outside the hospital well past 9 p.m. ET.

KCBS's Amy Johnson reported that about a dozen fans had arrived at Jackson's Neverland ranch.

Another group of fans gathered at a star bearing the name "Michael Jackson" on the Hollywood Walk of Fame. It wasn't actually the King of Pop's star, though - that was temporarily inaccessible because of a special event. The replacement star belonged to the British-born Los Angeles radio host of the same name.

Some fans formed a prayer circle Thursday on the front yard of the small white frame home where Jackson grew up. Others left stuffed animals and notes expressing their condolences.

Fifty-year-old Bernetta Galloway of Gary said residents are proud of Jackson because he was "somebody from Gary who did something with their life."

Jackson was 11 when the family moved out of Gary after the Jackson 5 recorded their first album in 1969. His last trip to Gary was in June, 2003.

Impromptu tributes began to take elsewhere around the world.

Fans took pictures of the marquee outside the Apollo Theater in Harlem, New York, which read, 'In memory of Michael Jackson, a true Apollo legend, 1958-2009."

Fans broke into applause as Jackson's music was played over the loudspeakers at the Glastonbury Festival in Somerset, England, where Bruce Springsteen, Neil Young and others were scheduled to play this weekend.

Jackson had been scheduled to play a sold-out 50-date "comeback tour" in the U.K. beginning July 13 and stretching into March of next year.

Jackson's former wife Lisa Marie Presley said in a statement, "I am so very sad and confused with every emotion possible. I am heartbroken for his children who I know were everything to him and for his family. This is such a massive loss on so many levels, words fail me."

Famed music producer Quincy Jones, who produced "Thriller," called Jackson a "little brother," and wrote, "He had it all - talent, grace, professionalism and dedication. He was the consummate entertainer and his contributions and legacy will be felt upon the world forever."

The family of Susan Boyle, who shot to global fame only recently with her vocal performances on "Britain's Got Talent," sent a statement to CBS News saying she was "deeply saddened".

"Just as her recording career is about to begin, the world of music loses one of it's most important, iconic, figures," her brother Gerry Boyle said in the written message.

California Gov. Arnold Schwarzenegger released a statement saying, "Today, the world has lost one of the most influential and iconic figures in the music industry. … Maria and I join all Californians in expressing our shock and sadness over his death and our hearts go out the Jackson family, Michael's children and to his fans worldwide."

"I wouldn't be surprised if the world stopped spinning tomorrow," wrote Will.i.am.

On Twitter, rapper Ludacris said, "If it were not for Micheal Jackson I would not be where or who I am today. His Music and Legacy will live on Forever. Prayers to the fam R.I.P."

More celebrity tweets on Jackson's death. (Note: the tweets are not edited):