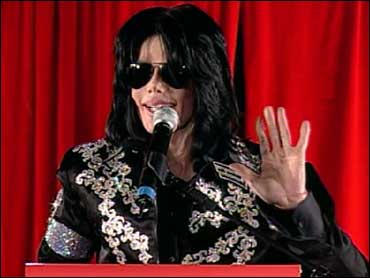 Michael Jackson has announced a series of London concerts in July.

Thursday's announcement was greeted by thousands of people at London's O2 arena, where the concerts will be staged. Jackson didn't specify how many shows he'll play, though posters have shown he's booked for 10 dates.

Tickets are expected to sell quickly for the shows, despite concerns the 50-year-old star may not be up for a return to the spotlight.

The King of Pop has been plagued by financial, legal, and medical woes for years and has not performed a major concert since 2001. His last studio album was released the same year.

A previous attempt to relaunch Jackson's career collapsed amid reports of ill health and court action.

His promoter claims the aging King of Pop passed an extensive medical check-up before announcing his comeback, according to CBS News correspondent Richard Roth.

"I'll be performing the songs my fans want to hear ... this is it, this is really it, this is the final curtain call," Jackson said.

Jackson's decision to kick off his concert series in London was well thought out.

"The reason why he picked London and the U.K. is he does really believe that he's got a stronger fan base here," Neil Sean, an entertainment columnist told CBS News correspondent Ben Tracy.

In recent years, there have been several sightings of Jackson looking frail.

In 2005 during his molestation trial, he famously appeared in pajamas after being rushed to the hospital, one of four such visits during the trial.

Critics now wonder if he's healthy enough to put on a show.

"He's not healthy enough to sort of recreate those shows that you loved way back in the '80s," Sean said. "Because you know what, sure as hell Michael Jackson is going to be ill at some point and the glove will be on the stage but he won't."

What exactly ails Jackson has always been a mystery. There've been rumors of everything from flesh-eating disease to surgical infections. One report says he recently got a clean bill of health, another says he has lung disease. So is the 50-year-old performer still fit for the stage?

"We know he's requested 10 doctors, four masseurs … . You've got all these retinue of people around him, that's lovely, but the bottom line is when the music starts you have to walk out there and do it," Sean said.

The one thing we do know is Jackson needs money -- and that's what's behind the new tour. He could take in as much as $30 million if he can hold up for 30 shows.