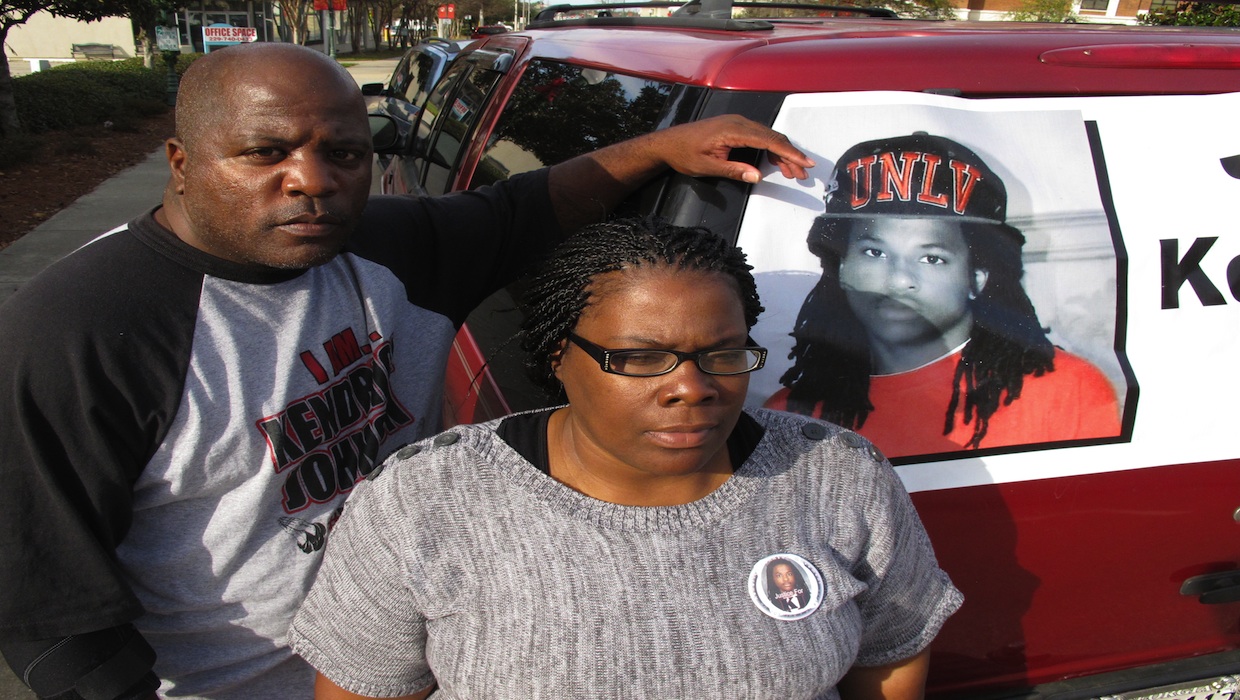 The parents of Kendrick Johnson, a Georgia teen found dead in Jan. 2012 inside a rolled-up wrestling mat in his high school gym, have filed a lawsuit against the funeral home that handled their son’s remains, alleging the  home intentionally disposed of their son’s organs in an effort to interfere with the investigation into his death.
Authorities initially called Johnson's death a freak accident, saying he fell head-first into an upright gym mat and became trapped. The case was closed, but Johnson's family insisted he was killed.
When a judge agreed to exhume Johnson's body last summer, a private pathologist not only determined he died of blunt force trauma to the neck, but also that his organs were missing and his body had been stuffed with newspaper.
The lawsuit filed by his parents in Lowndes County and obtained by CBS News’ Crimesider Wednesday, alleges Antonio Harrington, the owner of Harrington Funeral Home in Valdosta, “intentionally, willfully and secretly desecrated” the remains of Johnson with the intention of making it difficult to establish the “true cause and manner of death."
Johnson’s remains were delivered to the Harrington Funeral Home on Jan. 14, 2013, four days after the teen’s death. Upon receiving the remains, Antonio Harrington expressed concerns to Johnson’s parents about the explanation for their child’s death, according to court documents obtained by Crimesider.
Harrington “recommended that [Johnson’s parents] should get a ‘second opinion’ as to the cause of death notwithstanding the then-unknown-findings of official autopsy,” the court documents say.
An autopsy done by the Georgia Bureau of Investigation (GBI) determined Johnson died from positional asphyxia and concurred with authorities that his death was accidental.
In an effort to dispute findings by the GBI and authorities, the Johnsons asked Harrington for their son’s clothes with the hope that they would hold some evidentiary value, but Harrington told them that their son was delivered to his funeral home without his clothes, court documents say.
The GBI told the Johnsons that all of their son’s personal effects, including his clothing, were placed in a body bag and returned to the funeral home in Valdosta, Ga. with the remains, according to the court documents.
Johnson’s personal effects were never recovered.
The lawsuit also alleges that Harrington recommended to the Johnsons that their son have a “closed casket” funeral ceremony due to “the level of decomposition” of their son’s face, but they refused.
Following their son’s funeral, communication between the Johnsons and Harrington ceased until the summer of 2013 when a judge agreed to exhume Kendrick’s body for a second autopsy, at the request of his parents.
When Harrington was contacted by the Johnsons in regard to the exhumation of their son’s body, “at no time throughout the entire process of either preparing necessary documents or physically removing [Kendrick’s] remains from the ground did Harrington advise [Mr. and Mrs. Johnson] of the true condition of [their] child’s remains,” the court documents say.
It was during the second autopsy that a private pathologist not only determined that Kendrick died of blunt force trauma to the neck, but also that his organs were missing and his body had been stuffed with newspaper.
The lawsuit alleges that Harrington asked, “how did the autopsy go” without ever advising the Johnsons that he was aware of the fact that Kendrick’s body had been stuffed with newspaper and that his organs were missing.
Following their realization that Kendrick’s organs were missing, Mr. Johnson asked Harrington whether Kendrick’s organs were missing at the time the body was delivered from the GBI. Harrington responded, “Maybe one or two,” according to the court documents.
However, later, in a letter to the Johnsons dated Oct. 4, 2013, Harrington claimed that “due to the position of the body at the death, the viscera from his internal organs were destroyed, through natural process and henceforth were discarded by the [GBI’s pathologist] before the body was sent back to Valdosta.”
Sherry Lang, spokesperson for the GBI, told Crimesider in November that in "every single autopsy [conducted at the GBI], the internal organs are returned to the body cavity."
The Georgia Secretary of State was investigating Harrington Funeral Home in the handling of Johnson’s remains but the investigation concluded last month and found the funeral home “didn’t violate any rules.”
The U.S. Attorney for the Middle District of Georgia still has an open investigation into Johnson’s death.