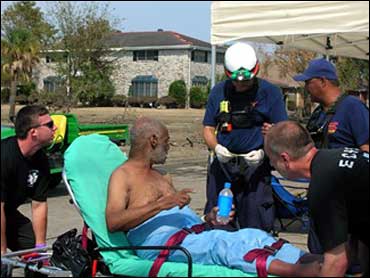 Day after day, for more than two weeks, the 76-year-old man sat trapped and alone in his attic, sipping from a dwindling supply of water until it ran out. No food. No way out of a house ringed by foul floodwaters.

Without ever leaving home, Gerald Martin lived out one of the most remarkable survival stories of Hurricane Katrina. Rescuers who found him Friday, as they searched his neighborhood by boat, were astounded at his good spirits and resiliency after 18 days without food or human contact.

"It's an incredible story of survival," said Louie Fernandez, spokesman for the Federal Emergency Management Agency search unit that carried out the rescue.

In recent days, search crews have been finding corpses by the dozens in the still-flooded neighborhoods of New Orleans, but not trapped survivors. The FEMA search-and-rescue boat navigating through the Eighth Ward didn't expect to find anyone alive at 6010 Painters St., but they planned to search the premises of a one-story wood house.

As the motor idled and the boat glided forward, they heard a voice.

Using a sledgehammer, a FEMA rescuer broke down the front door and went inside with another team member, struggling through a living room jumbled with overturned, sodden furniture.

They found Martin sitting in a chair in the sludge-covered kitchen, partially undressed in an effort to keep cool. After 16 days in his attic, he had descended to the ground floor two days earlier when the floodwaters — once up to the ceiling — finally drained, even though the house remained surrounded by several feet of water.

Incredibly, Martin — who ran out of his gallon-and-a-half water supply on Thursday — was able to walk out of the house with just a bit of assistance.

"He was weak, very tired, but he was able to speak, able to stand," Fernandez said. "He was very relieved. He was very thirsty. He was in good spirits."

Martin was given water to drink, then taken to Ochsner Foundation Hospital, where nurse Jinny Resor said he was treated for dehydration. She said Martin had taken medication while he was trapped, but she wasn't sure what it was for.

In a brief telephone interview with The Associated Press late Friday night, Martin said he was feeling fine.

As for his ordeal, his description was concise: "I was living in the attic for 16 days, and I was living off water."

The two rescuers who retrieved him are firefighters with a California-based FEMA team — J.D. Madden of Santa Clara and Eric Mijangos of Menlo Park.

"I don't know how much longer he could have went on without water," said Madden, 29.

Martin's family left before the storm, but he stayed to attend church, later took a nap and woke up to find that his home was filling with water, Madden said.

Martin only had time to grab some water and get to his attic, which he described as feeling like an oven during day-after-day of mid-90-degree heat that followed the storm. Madden said the heat in the attic might have been even worse, perhaps fatal, except for shade provided by a fallen tree.

Staff Sgt. Jason Randor, a military police officer with the Massachusetts National Guard, watched the rescue from another boat that was helping provide security for the search team. He recalled jubilant yells from the firefighters when they realized someone alive was inside.

"While they were putting him in the chopper, he asked if they could stop on the way at Taco Bell to get something to eat," Randor said.

Fernandez, of FEMA, was on scene when Martin arrived at a FEMA base camp before going to the hospital.

"He had lost a lot of weight," Fernandez said. "He definitely had to hold his pants up with his hands."

Martin was the first trapped person found alive by Madden's California Task Force Three team in its 12 days of calling out to homes from the boat and peering into windows.

"We've been in the rescue mode the whole time and haven't given up hope that there was someone out there alive," he said.

But officials overseeing the search effort said the discovery of corpses and the dwindling number of rescues has been taking an emotional toll on search units.

Fernandez said Saturday that Martin's rescue was a welcome morale boost for his colleagues.

"Little victories like we saw yesterday help motivate people, who are facing one of the toughest jobs they've ever faced," he said.