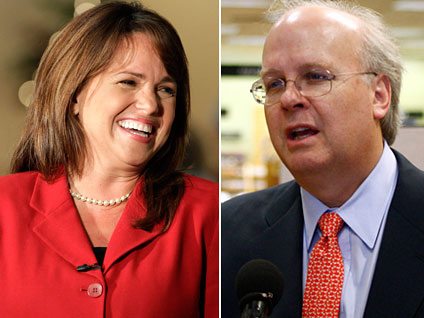 In an appearance on Fox News last night, Karl Rove questioned the governing ability and "checkered" past of Tea Party-backed candidate Christine O'Donnell, who pulled off a stunning win for Delaware's Republican Senate nomination on Tuesday, and voiced his doubt that O'Donnell was a viable candidate in the general election.

"We were looking at eight to nine seats in the Senate," Rove said in an interview with Fox's Sean Hannity. "Now we're looking at seven to eight, in my opinion. This is not a race we're going to be able to win."

Rove pointed to unresolved questions about O'Donnell's financial practices, potentially dubious campaign tactics, and generally "nutty things" she'd been saying. "It does conservatives little good to support candidates who, at the end of the day, while they may be conservative in their public statements, do not evince the characteristics of rectitude and truthfulness and sincerity and character that the voters are looking for," Rove said. "One thing that O'Donnell is now going to have to answer in the general election that she didn't in the primary is her own checkered background."

Rove also emphasized his belief that O'Donnell's victory was less a reflection on her suitability for the position than of party discontent with Mike Castle, a nine-term Delaware congressman who hadn't lost a political race since his election to the state House in 1966. "This was about Mike Castle's bad votes," Rove said.

"It does conservatives little good to support candidates who, at the end of the day, while they may be conservative in their public statements, do not evince the characteristics of rectitude and truthfulness and sincerity and character that the voters are looking for," Rove said.

O'Donnell, a marketing consultant who has twice led unsuccessful Senate campaigns, fired back at Rove this morning on ABC's Good Morning America, condemning what she called "political cannibalism" and calling Rove's accusations "unfactual."

"Everything he is saying is unfactual," O'Donnell said. "And it's a shame, because he's the same so-called political guru that predicted I wasn't going to win. And we won and we won big... He's eating some humble pie and he's just trying to restore his reputation," she said.

O'Donnell also took a shot at Rove's personal wealth when responding to his question about why she had taken "nearly two decades" to pay off her student bills.

"I'm not a trust fund baby," she said. "Most Delawarians can relate to having to work hard to pay for their college education. I was never dishonest about that." (watch below)