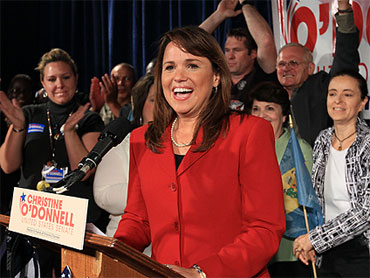 But it's terrible news overall for Republicans, whose prospects for winning back the Senate in November just took a serious nosedive.

Castle is a moderate Republican well-suited to a moderate state, and he would have gone into the general election fight against Democrat Chris Coons as the likely winner.

That's not the case with O'Donnell. Republicans were so convinced that she couldn't win the general election that they criticized her aggressively, with the state Republican chairman suggesting she is a liar who "could not be elected dog catcher." Before the vote, Castle said explicitly, "if she's nominated, Republicans lose the election automatically."

Even Freedomworks, the Tea Party-affiliated group that has played a major role in expanding the movement, declined to follow Sarah Palin and Jim DeMint's lead and back O'Donnell. "It's not wise to elect a philosophically perfect candidate who is not capable of winning the general election," president Matt Kibbe said.

There are 292,738 registered Democrats in Delaware, compared to 182,796 registered Republicans. While Castle, the longest-serving congressman in the state's history, would have attracted support from independents and even some Democrats, O'Donnell will have to depend largely on the GOP base to put her over the top. And the GOP base simply isn't that big in Delaware, which President Obama carried by 25 points in the 2008 presidential election.

In her victory speech, O'Donnell said, "Ladies and gentlemen, the people of Delaware have spoken." But that's something of a stretch: The Republican primary in Delaware is closed, which means only registered Republicans could cast ballots. Had the primary been open - and independents and Democrats been able to vote - Castle would likely have been the one holding the victory party.

And here are the facts of life for the GOP: Without Delaware, Republicans' chances of netting the ten seats they need to take control of the Senate have dramatically declined. Unless O'Donnell can pull off a stunner in the general election equivalent to the one she pulled off on Tuesday, Republicans will have to run the table on all other competitive seats.

Republicans tried to put on a brave face once the results came in, with the National Republican Senatorial Committee emailing out a statement saying, "We congratulate Christine O'Donnell for her nomination this evening after a hard-fought primary campaign in Delaware."

But NRSC chairman John Cornyn himself said before the vote that O'Donnell's November prospects were "a serious issue," adding that he has "doubts" about his newly-minted nominee.

O'Donnell acknowledged in her victory speech that "A lot of people have already said that we can't win the general election." She added that "it will be hard work, but we can win."

Unfortunately for O'Donnell, Delaware is not Utah or Alaska, where Tea Party candidates unseated sitting senators earlier this year. Those states are conservative enough that whoever came out of the primary immediately became the strong favorite to win in November. For that reason, the GOP establishment and the Tea Party movement were able to maintain an uneasy and mutually-beneficially coexistence despite their sometimes-divergent agendas.

With O'Donnell's win, all that has changed. A movement that has undeniably energized the GOP base has now turned a likely victory into a likely defeat; it has also heralded something of a moment of reckoning for Tea Partiers who must come to terms with the fact that the most ideologically pure candidate isn't always the most electable.

In her victory speech, O'Donnell urged the state GOP to work on her behalf for "the greater good" - a tall order in light of the nasty criticism it leveled at her in the primary. It's the same message that establishment Republicans were sending Delaware Republicans before the vote - and one that, from their perspective, failed to get through.