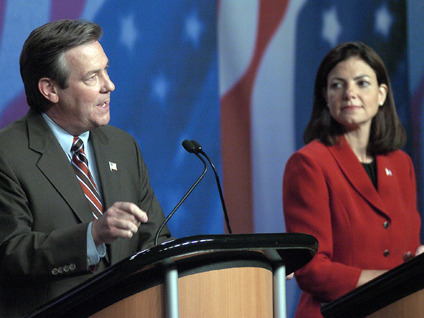 UPDATE, 2:25 p.m. ET: The state of New Hampshire on Wednesday afternoon certified Ayotte as the winner of the Republican Senate primary, setting the stage for a possible recount.

With 85 percent of precincts reporting, Ayotte had a slight lead, garnering 46,331 votes, or 38 percent. Lamontagne had 45,352 votes, or 37 percent. If the race remains this close, Lamontagne could legally request a recount.

The rest of the votes were splintered among the five other candidates in the race, including businessman Bill Binnie, who received 14 percent of the votes. Binnie began campaigning early in the race and spent more than $5 million out of his own pocket, but the more moderate candidate attracted scrutiny with his aggressive campaign.

Ayotte was the heavy hitter in the race, with the backing of both the establishment and some national conservative figures. National Republicans recruited her last year to run for retiring Republican Sen. Judd Gregg's seat, and Gregg favored her in the race. Ayotte also had the support of Sarah Palin, who in a robo-call called her a "Granite Grizzly" who is the "true conservative running for the U.S. Senate in New Hampshire."

Ayotte spent more than $2 million on her campaign, the AP reports, while Lamontagne spent just $400,000.

While the two candidates are not far apart ideologically, Lamontagne insisted, "You can't get to the right of me."

The lawyer and former head of the state Board of Education gained momentum near the end of the campaign with a nod of support from conservative Sen. Jim DeMint of South Carolina, as well as the endorsement of the New Hampshire Union Leader, the state's biggest newspaper.

In 1996, Lamontagne similarly had a late surge in the New Hampshire GOP gubernatorial race. He won the nomination that year but lost the general election.

The winner of the Republican primary will face off against Democratic nominee Paul Hodes, who was unopposed in the primaries. Hodes said Tuesday night the Republican agenda is "extreme, radical and right wing," the AP reports.