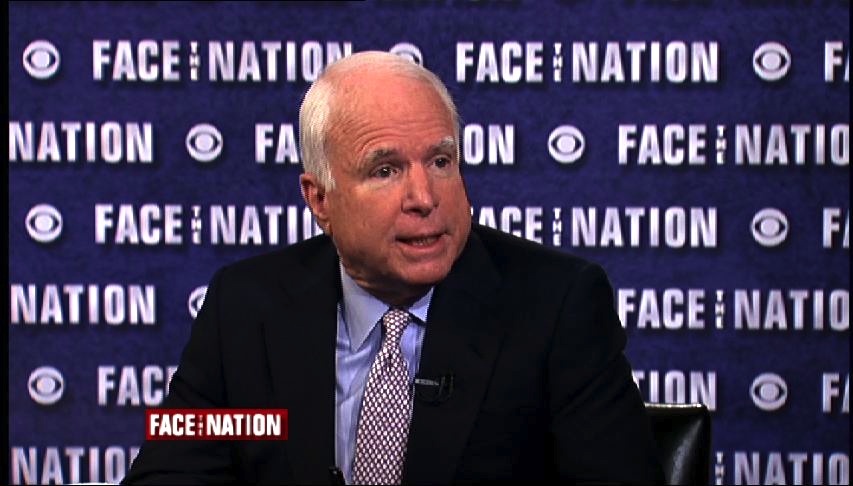 Current and former U.S. officials welcomed the return of Sgt. Bowe Bergdahl, the only American soldier held prisoner in Afghanistan, but voiced concern about the release of five members of the Taliban who had been held at the Guantanamo Bay as part of a negotiated prisoner swap.

"These are the hardest of the hard core. These are the highest high-risk people, and others that we have released have gone back into the fight," said Sen. John McCain, R-Ariz., in an interview on "Face the Nation," adding that he was disturbed the Taliban named the prisoners they wanted in exchange for Bergdahl's freedom.

"We need to know more information about the conditions of where they are going to be," McCain added. "It is disturbing that these individuals would have the ability to reenter the fight."

In another interview, Sen. Bernie Sanders, I-Vt., called the prisoner exchange a "sensitive and delicate issue" and said there needs to be more information about the long-term consequences of the release and steps to ensure the detainees do not return to the battlefield.

The Qatari government, which mediated the negotiations and will hold the Guantanamo detainees for a year, has ensured the U.S. that they have put measures in place to ensure U.S. national security is not compromised, Defense Secretary Chuck Hagel said Saturday.

CBS News National Security Correspondent David Martin called the release a "get out of jail free card" for the detainees, who won't be allowed to travel but will be allowed to live with their families, according to the Taliban.

"A lot depends here on the behavior of the Qatari government, whether they are a responsible counterterrorism partner," Washington Post columnist David Ignatius said on "Face the Nation."

In a separate interview, former National Security Agency director Michael Hayden said he would have "been a strong voice of caution" about the release of the prisoners if he were still in the government to ensure decision makers knew the extent of the risk they were taking by releasing them.

Hayden noted that Bergdahl's release will spur controversy because it is so easy to arrive at completely opposite conclusions about whether the U.S. took the correct action.

"Looking at this through a humanitarian lens the answer is obvious. Looking at it through the lens I had to look through when I was back in government, the answer is equally obvious and it's not the same answer," he said.

Several Republican lawmakers have already raised concerns that President Obama violated U.S. law by approving the exchange of prisoners at Guantanamo without notifying Congress 30 days in advance. Others are worried that it violates a U.S. precedent not to negotiate with terrorists. For McCain, the chief concern is what will happen to the detainees once they are released.

"If they reenter the fight then it is going to put American lives at risk and none of us want that to happen...if they are able to have after a year in Qatar to do whatever they want to do there's no doubt they will reenter the fight," he said.

He also expressed concern about a larger unraveling in the Middle East as the U.S. withdraws from Afghanistan. McCain pointed to recent incidents like an American citizen carrying out a suicide bombing in Syria as evidence that the al Qaeda is being reconstituted in places like Syria and Iraq.

"The bloodiest battle of the Iraq war was the second battle of Fallujah. The black flags of al Qaeda now fly over Fallujah. This total evacuation withdrawal from Afghanistan portends to be another replay of the Iraq debacle which is now a direct threat to the United States of America. And I do not understand why the president didn't learn the lesson of Iraq, where we could have left forces behind," McCain said.