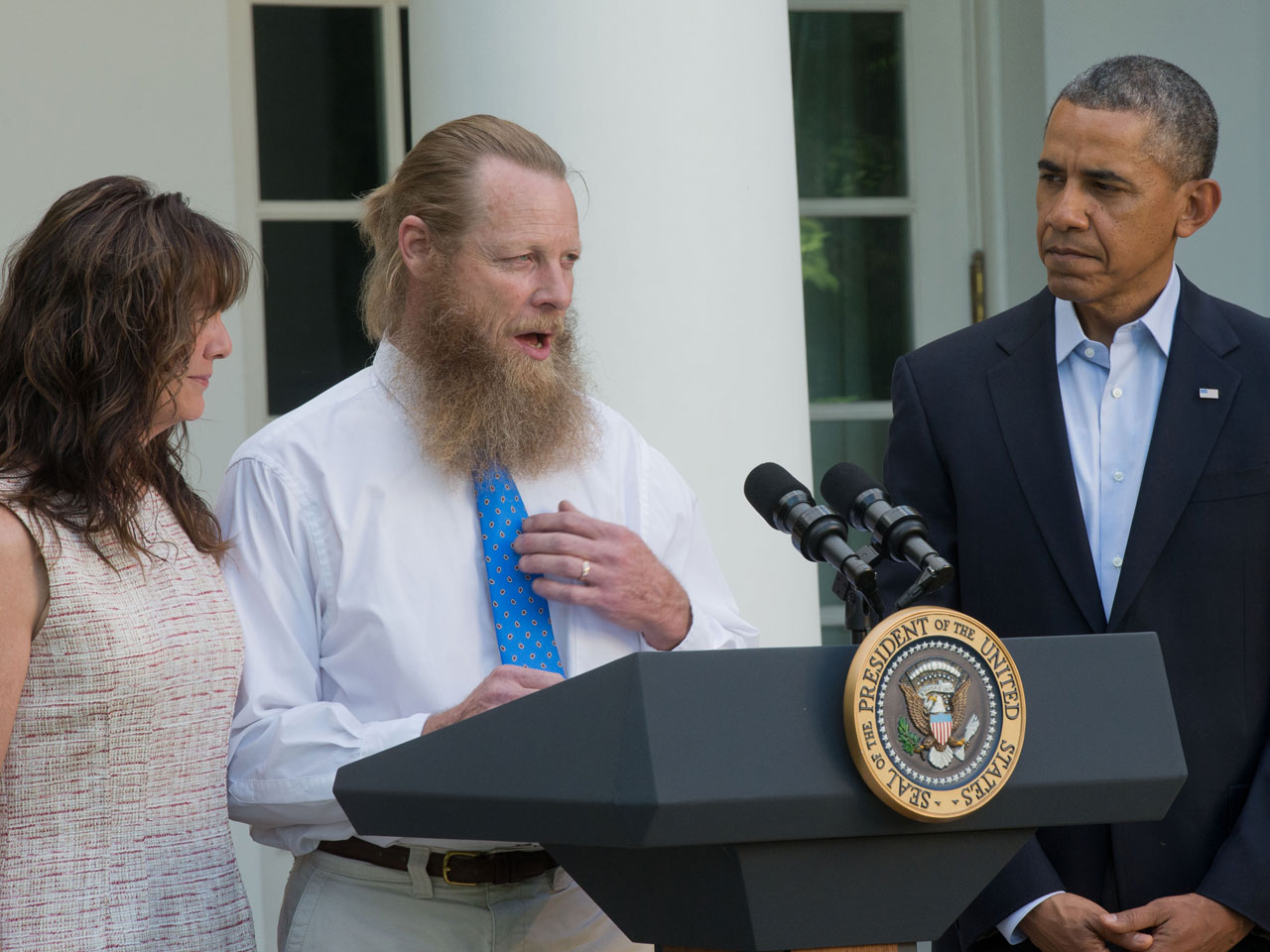 WASHINGTON - Nearly five years after his capture by insurgents, Sgt. Bowe Bergdahl's "safety and health were both in jeopardy" and officials had to act quickly to obtain his release, Defense Secretary Chuck Hagel said Sunday.

The only American prisoner of the Afghan war was freed Saturday after President Barack Obama agreed to release five high-level Afghan detainees from the U.S. prison at Guantanamo Bay, Cuba.

"While Bowe was gone, he was never forgotten," Obama said from the White House Rose Garden, where he was joined by Bergdahl's parents. "The United States of America does not ever leave our men and women in uniform behind."

Several top Republican lawmakers have said Obama violated U.S. law when he approved an exchange involving prisoners at Guantanamo without notifying Congress 30 days in advance. Others, including Senators John McCain, R-Ariz., and Saxby Chambliss, R-Ga., have also expressed concerns about the choice to swap high-level Guantanamo detainees for Bergdahl.

"These are the hardest of the hard core. These are the highest high-risk people, and others that we have released have gone back into the fight," said Sen. John McCain, R-Ariz., in an interview on "Face the Nation," adding that he was disturbed the Taliban named the prisoners they wanted in exchange for Bergdahl's freedom.

"We need to know more information about the conditions of where they are going to be," McCain added. "It is disturbing that these individuals would have the ability to reenter the fight."

In response, the White House have said that officials considered what they called "unique and exigent circumstances" and decided to go ahead with the transfer in spite of the legal requirement.

On Sunday, Susan Rice, Obama's national security adviser, said on ABC's "This Week" that there had been extensive consultations with Congress in the past about getting Bergdahl back and that lawmakers knew the idea of trading detainees was on the table.

And Hagel, who was traveling to Afghanistan to meet with U.S. troops, said the action was not relayed to Congress because of its urgency. He said intelligence indicated that Bergdahl's "health was deteriorating."

CBS News correspondent Margaret Brennan reports the Obama administration has also justified not informing Congress because in the Bergdahl case, the president directed U.S. diplomats to go through a third party, Qatar in this case.

This was very risky, because a past try to broker a peace deal between the Taliban and the Afghanistan government fell apart because of some basic missteps. But this time, Qatar delivered, Brennan reports.

At Bagram Air Field, Hagel thanked the special operations forces that participated in the rescue. Gen. Joseph Dunford said there was a sense of excitement in the headquarters as the news spread

"You almost got choked up," he said. "It was pretty extraordinary. It has been almost five years and he is home."

Bergdahl's parents, Bob and Jani, led a tireless campaign to keep their son's story in the public eye. They were expected to hold a news conference Sunday in their hometown of Hailey, Idaho, where residents were planning a homecoming celebration for the soldier.

Bergdahl, in good condition and able to walk, was handed over to U.S. special operations forces by the Taliban in an area of eastern Afghanistan, near the Pakistani border, U.S. officials said. In a statement on its website, the Taliban put the location on the outskirts of Khost province.

The government of Qatar served as the go-between in the negotiations. Qatar is taking custody of the five Afghan detainees who were held at Guantanamo.

In weighing the swap, U.S. officials decided that it could help further the effort to reach reconciliation with the Taliban, something the U.S. sees as key to reaching a level of security in Afghanistan. But they acknowledged that there was a risk of emboldening other insurgent groups who might grab U.S. troops or citizens in an effort the secure the release of others prisoners.

Bergdahl was captured by men loyal to the Haqqani Network, a militant group based across the border in North Waziristan, Pakistan, reports CBS News' Jere van Dyk.

The patriarch of the Haqqani Network is Jalaladin Haqqani, who was a U.S. ally in the 1980s, when America supplied his militants with billions of dollars in weaponry to fight the Soviet Union, which had invaded Afghanistan.

The U.S. believes Bergdahl was held for the bulk of his captivity in Pakistan, but officials said it was not clear when he was transported to eastern Afghanistan.

Officials said Bergdahl was taken to Bagram Air Field for medical evaluations, then transferred to Landstuhl Regional Medical Center, a military facility in Germany, before he's returned to the U.S. An official said Bergdhal was tentatively scheduled to go to the San Antonio Military Medical Center where he would be reunited with his family.

As they stood with Obama in the Rose Garden, Bob Bergdahl said his son was having trouble speaking English after his rescue. The elder Bergdahl, who grew a long, thick beard to honor his son, had worked to learn Pashto, the language spoken by his son's captors, and delivered a message to him and the people of Afghanistan in that language.

Switching back to English, he said "the complicated nature of this recovery will never really be comprehended."

The circumstances surrounding Bergdahl's capture remain murky. There has been some speculation that he willingly walked away from his unit, raising the question of whether he could be charged with being absent without leave or desertion.

In 2012, Rolling Stone magazine quoted emails Bergdahl is said to have sent to his parents that suggest he was disillusioned with America's mission in Afghanistan, had lost faith in the U.S. Army and was considering desertion. Bergdahl told his parents he was "ashamed to even be American." The Associated Press could not independently authenticate the emails.

Hagel declined to say whether he believes Bergdahl was attempting to desert the Army or go AWOL when he walked away from his unit and disappeared.

"Our first priority is assuring his well-being and his health and getting him reunited with his family," Hagel said. "Other circumstances that may develop and questions - those will be dealt with later."

A senior U.S. official told The Associated Press that the Army would make the decision on any charges but that the feeling at the moment was that Bergdahl had suffered enough in his ordeal. All the officials who discussed details of Bergdahl's transfer insisted on anonymity because they were not authorized to be identified.

The U.S. has long sought Bergdahl's release, but there was renewed interest in his case as Obama finalized plans to pull nearly all American forces out of Afghanistan by the end of 2016.

The five Guantanamo detainees involved in the swap departed the base on a U.S. military aircraft Saturday afternoon. Under the conditions of their release, they will be banned from traveling outside of Qatar for at least one year.

Obama and the emir of Qatar spoke last week about the conditions of the release, which have been codified in a memorandum of understanding between the two countries, officials said.

The detainees were among the most senior Afghans still held at the prison:

-Abdul Haq Wasiq, who served as the Taliban deputy minister of intelligence,

-Mullah Norullah Nori, a senior Taliban commander in the northern city of Mazar-e-Sharif when the Taliban fought U.S. forces in late 2001

-Khairullah Khairkhwa, who served in various Taliban positions including interior minister and had direct ties to Mullah Omar and Osama bin Laden

-Mohammed Nabi, who served as chief of security for the Taliban in Qalat, Afghanistan, and later worked as a radio operator for the Taliban's communications office in Kabul

-Mohammad Fazl, whom Human Rights Watch says could be prosecuted for war crimes for presiding over the mass killing of Shiite Muslims in Afghanistan in 2000 and 2001 as the Taliban sought to consolidate their control over the country.

In a statement on the Taliban website that was translated by the Washington-based SITE Intelligence Group, the Taliban said it "was and has been for a long time attempting to free all the imprisoned Afghan prisoners inside and outside the country, and restoring the right of freedom to them quickly."

The Taliban said it was seeking the release of additional prisoners but offered no specifics.