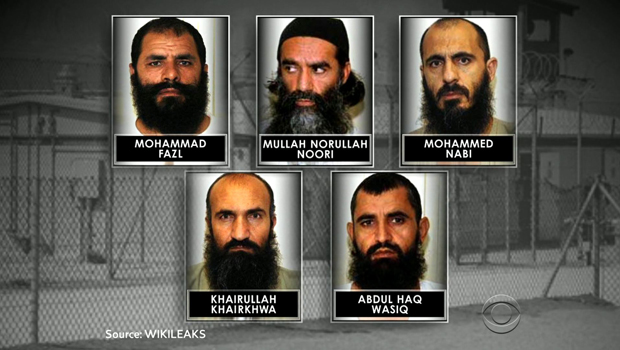 Five men who were held at the U.S. prison at Guantanamo Bay were swapped for Army Sgt. Bowe Bergdahl, freed after being a Taliban captive since 2009. They are now in Qatar, whose government has promised to restrict their movements for one year.

All were considered high-level prisoners, and their use in the exchange has already put the Obama administration on the defensive.

In weighing the swap, U.S. officials decided that it could help further the effort to reach reconciliation with the Taliban, something the U.S. sees as key to reaching a level of security in Afghanistan. But they acknowledged that there was a risk of emboldening other insurgent groups who might grab U.S. troops or citizens in an effort the secure the release of others prisoners.

Below is information about each of the detainees released.

Khairullah Khairkhwa is the most senior ex-Guantanamo prisoner who comes from "the fraternity of original Taleban who launched the movement in 1994," according the Afghanistan Analysts Network. He surrendered to President Hamid Karzai's brother just before he was captured in January 2002. His most prominent position was as governor of Herat Province from 1999 to 2001. He served in various Taliban positions including interior minister and had direct ties to Mullah Omar and Osama bin Laden.

Mullah Norullah Noori served as governor of Balkh Province in the Taliban regime and played some role in coordinating the fight against the Northern Alliance. He was a senior Taliban commander in the northern city of Mazar-e-Sharif when the Taliban fought U.S. forces in late 2001.

Mohammad Fazl commanded the main force fighting the U.S.-backed Northern Alliance in 2001 and served as chief of army staff under the Taliban regime. Human Rights Watch says he could be prosecuted for war crimes for presiding over the mass killing of Shiite Muslims in Afghanistan in 2000 and 2001 as the Taliban sought to consolidate their control over the country. Fazl joined the Taliban early, never held a civilian post, and rose through the ranks because of his fighting ability, ending up up as one of their most important and feared military commanders, according to the Afghanistan Analysts Network.

Abdul Haq Wasiq was the deputy chief of the Taliban regime's intelligence service and the cousin of the head of the service, Qari Ahmadullah, who was among the Taliban's founding members, according to the Afghanistan Analysts Network.

Mohammed Nabi was a Taliban official in Khost Province. He served as chief of security for the Taliban in Qalat, Afghanistan, and later worked as a radio operator for the Taliban's communications office in Kabul.

In a statement on the Taliban website that was translated by the Washington-based SITE Intelligence Group, the Taliban announced the exchange with "great happiness and joy" and said it "was and has been for a long time attempting to free all the imprisoned Afghan prisoners inside and outside the country, and restoring the right of freedom to them quickly."

The Taliban said it is seeking the release of additional prisoners but offered no specifics. It also said the five released detainees would be received by members of its political office in Qatar. That office was reportedly closed last year after a dispute with Afghan President Hamid Karzai and American officials, but its alleged role in the Bergdahl exchange may be an indication that it is functioning.