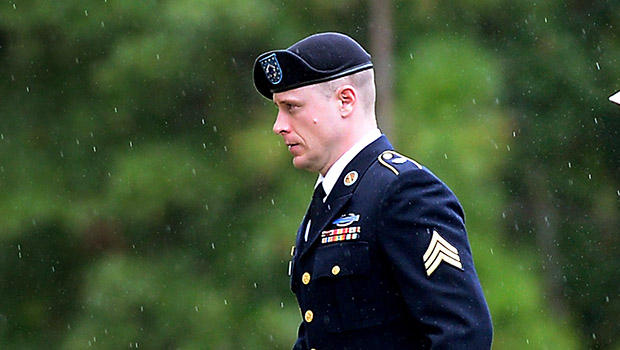 FORT BRAGG, N.C. -- In an unexpected and emotional statement, Army Sgt. Bowe Bergdahl apologized in court Monday to all the military personnel who were wounded searching for him and described the daily nightmares and flashbacks to his five years in captivity of Taliban allies he still endures.

Bergdahl was the first witness in what's expected to be a multi-day presentation by the defense to the judge who will decide his punishment for endangering comrades by walking off his post in Afghanistan in 2009. He spoke for two hours, giving a wide-ranging description of his brutal years in captivity and what challenges he still faces with daily life.

"I would like everyone who searched for me to know it was never my intention for anyone to be hurt, and I never expected that to happen," he said, choking up at times. "My words alone can't take away their pain."

Bergdahl faces a maximum of life in prison after pleading guilty to desertion and misbehavior before the enemy.

His appearance on the witness stand, which the defense hadn't publicly made known in advance, served as a dramatic counterpoint to several days of emotionally wrenching testimony by several service members who were seriously wounded during a massive search effort. He described the brutal conditions he faced, including beatings with copper wire and unending bouts of gastrointestinal problems brought on by squalid conditions. He was kept in a cage for four out of the five years after several escape attempts, and his muscles atrophied to the point he could barely stand or walk.

Asked by a defense attorney what the worst part of captivity was, he responded that it wasn't the beatings.

"The worst was the constant, just the constant deterioration of everything. The constant pain from my body falling apart. The constant screams from my mind," he said, haltingly. "It was the years of waiting to see whether or not the next time someone opens the door if that would be the person coming to execute you."

Bergdahl said he still has nightmares that make it hard to sleep more than five hours. He checks his door at least three times to make sure it's secure each night and sleeps with a flashlight nearby.

He wakes up sometimes not remembering that he's back in the U.S., he said, and has daytime flashbacks to captivity arising from unpredictable triggers.

"It could be anything: A smell, perfume, damp earth, garbage," he said.

The 31-year-old soldier from Hailey, Idaho, was brought home by President Barack Obama brought him in 2014 in a swap for five Taliban prisoners at Guantanamo Bay.

Because Bergdahl's words in court were an unsworn statement, prosecutors won't be given the chance to cross-examine him.

His dramatic words came after an eventful morning in which the judge ruled that President Donald Trump's scathing criticism Bergdahl won't prevent the soldier from receiving a fair sentence.

Then-Republican nominee Mr. Trump repeatedly called Bergdahl a traitor on the campaign trial and suggested that he be shot or thrown from a plane without a parachute. Mr. Trump revived those comments when Bergdahl pleaded guilty on Oct. 16 by saying at a news conference that he thinks people are aware of what he said before.

Nance did say he would keep Mr. Trump's comments in mind as he weighs other factors that will go into his sentencing decision. The hearing is expected to last several more days.

Following Nance's ruling, prosecutors called their final witness, Shannon Allen, to discuss a traumatic brain injury suffered by her husband when he was shot in the head during a search mission for Bergdahl. National Guard Master Sgt. Mark Allen was on a mission to gather information in two villages in July 2009 when his unit was ambushed by insurgents using small arms, machine guns and rocket-propelled grenades.

The soldier is unable to speak, uses a wheelchair and needs help with everyday tasks, his wife testified.

Shannon Allen's voice faltered when she referred to the brain injury's effect on his interactions with their daughter, who was an infant when he was wounded. She is now 9 and Mark Allen is in his mid-30s.

"He's not able to reach out for her or talk to her," she said, tearing up and pausing to take a deep breath. "He's never had the chance to really play with her or help coach her sports or ask about her day."