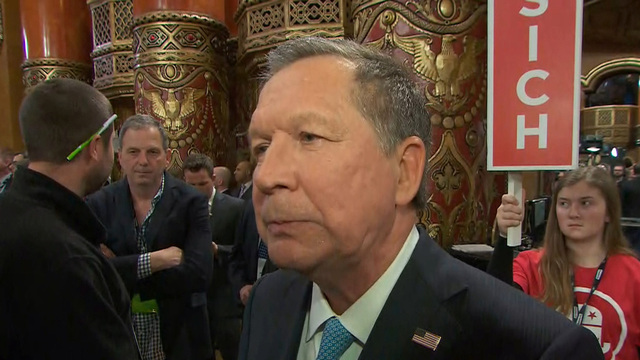 After Thursday's Republican debate, where Donald Trump dominated much of the conversation, Ohio Gov. John Kasich laid out his path forward to the GOP nomination, predicting that a contested convention this summer will eventually stop Trump's rise.

"Frankly, if I win Ohio, we're probably gonna end up in a convention -- a brokered convention -- and then we're gonna find out who the adult is," Kasich said Thursday in an interview with CBS News' chief White House correspondent Major Garrett. The last time Republicans were close to a "brokered" convention, where no candidate has a clear-cut delegate victory, was in the 1976 primary between Gerald Ford and Ronald Reagan.

He added: "And then we're gonna win in Ohio. It'll be a whole new ball game."

When pressed on how a win in one state could change his prospects for the nomination, Kasich anticipated that Pennsylvania and Illinois would also be ripe battlegrounds for his campaign.

Then, "we're gonna go to the eastern seaboard to New Jersey, Connecticut. These are places we are going to do very well."

"My folks tell me that nobody will go to the convention with enough delegates," Kasich said. "And then you know it's a whole new situation." He noted that it was a "cool thing to think about" a contested convention.

When asked how he felt about sharing a debate stage with three bickering candidates, the Ohio Republican brushed it off, saying "I don't think too much about it."

"I'm out to sell my message, and I think from everything I've heard tonight, we did really well," he said. "Now maybe the media will focus on the yelling 'cause that gets the eyeballs but maybe tonight they'll focus on who really had the substance up there."