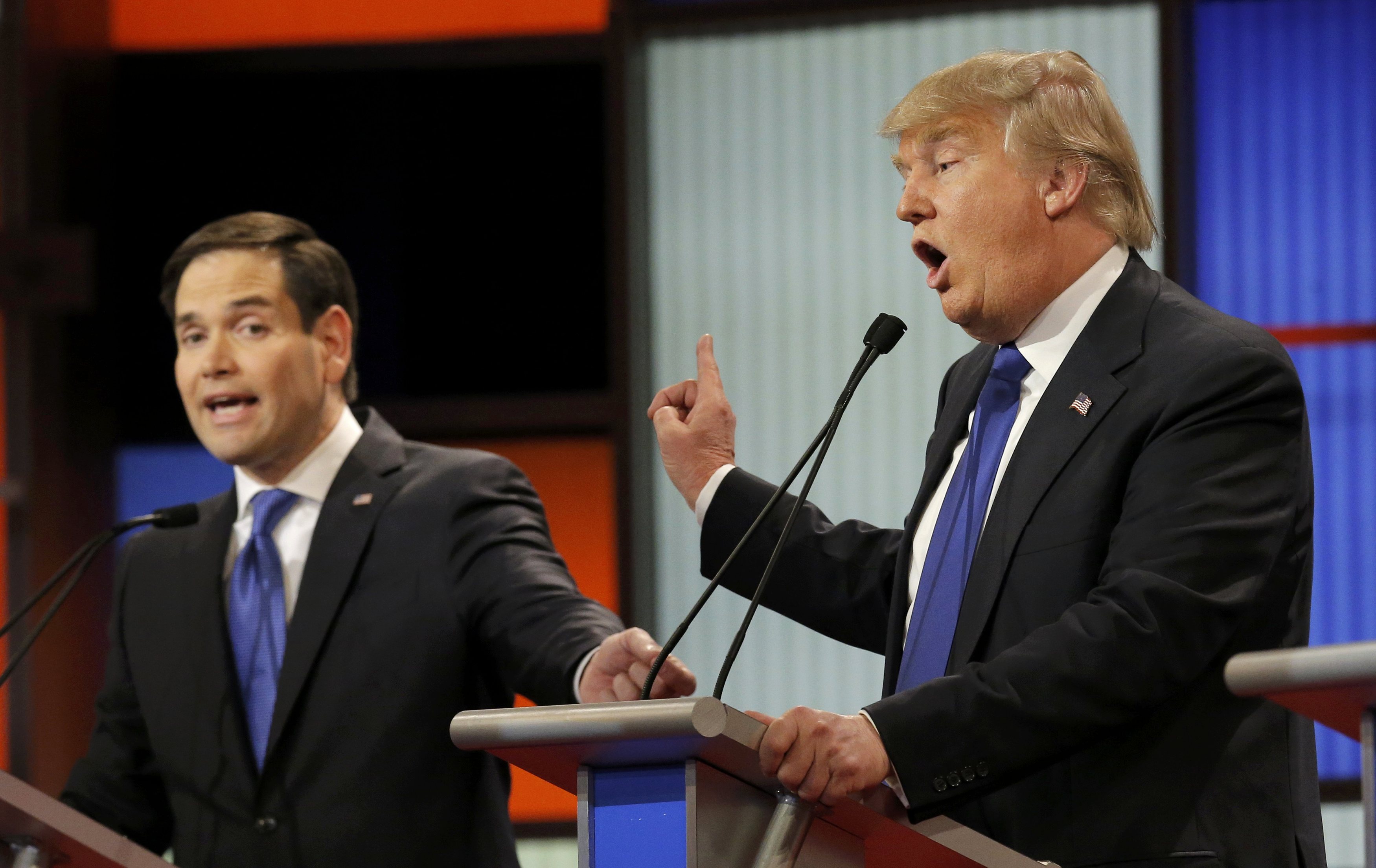 Donald Trump has changed his mind and shifted his positions on several policy issues, and he repeatedly owned up to it during the 11th Republican debate on Thursday night.

In fact, it happened in real time on the Detroit debate stage: "I'm changing it, and I'm softening the position," Trump declared about an immigration policy stance outlined on his campaign website.

Specifically, Fox News debate moderator Megyn Kelly asked Trump about the fact that he supported the use of H1-B visas during a prior debate, even though he expresses opposition to them on his website.

"I'm changing. I'm changing," Trump responded. "We need highly skilled people in this country, and if we can't do it, we'll get them in. But, and we do need in Silicon Valley, we absolutely have to have."

The Thursday night debate took some wild and some unexpected turns, thanks to the front-runner's antics. He made reference to his own genitalia within the first five minutes of the night, and he bestowed disparaging nicknames upon his opponents, like "Little Marco" and "Lyin' Ted." His opponents, meanwhile, were beside themselves as they tried to warn the GOP electorate that Trump is not just unpredictable but also unprincipled.

"What's been reported is that Donald told the editorial board of the New York Times, 'What I'm saying on immigration, I don't believe,'" Sen. Ted Cruz of Texas said Thursday night, slamming Trump for refusing to reveal what he said in his off-the-record conversation with the newspaper.

"'I'm not going to build a wall, I'm not going to deport people, this is all just rhetoric for the voters,'" Cruz continued in his imagined version of the conversation. "Now, if he didn't say that, he has an easy solution. Simply release the tape. But, for everyone at home who's mad at politicians that lied to us, Donald's record right now as he standing here.. His record right now is one of repeatedly hiring illegal aliens."

Sen. Marco Rubio of Florida managed to drive home Trump's "flexibility" with a well-placed zinger, delivered right in the middle of a heated exchange between Trump and Cruz. After Cruz instructed Trump to stop interrupting him and just "breathe," Rubio asked, "When they're done with the yoga, can I answer a question?"

Cruz retorted, "I really hope that we don't see yoga on this stage." That set up Rubio for his punchline: "Well, he's very flexible, so you never know."

Trump has never denied his unpredictable nature. "I like to be unpredictable," he said in an October debate, explaining why he carries a concealed weapon. In September, Trump said he likes to stay unpredictable when dealing with foreign foes. "You want to have a certain amount of, you want to have a little bit of guesswork for the enemy," Trump said. During Thursday night's debate, he seemed to apply that strategy to his race against the remaining GOP candidates. He also seemed to telegraph that he's willing to shift positions to stay competitive in the general election, keeping the presumptive Democratic candidate Hillary Clinton on her toes.

In some instances, the GOP front-runner made a relatively compelling argument for staying flexible: "In terms of immigration -- and almost anything else -- there always has to be some, you know, tug and pull and deal," he said. "We need give and take in government. If you don't have give and take, you're never going to agree on anything."

In other instances, the defense Trump gave for his "flexibility" seemed to be an admission of his own carelessness: "Well, on Afghanistan, I did mean Iraq," the front-runner said, explaining why he once called the war in Afghanistan a "terrible mistake."

Trump explained Thursday night: "I think you have to stay in Afghanistan for a while, because of the fact that you're right next to Pakistan, which has nuclear weapons, and we have to protect that. Nuclear weapons change the game. And I was always against going into Iraq."

Sen. Marco Rubio seized on Trump's "flexibility" as further proof that the front-runner is a "con artist." He repeated his charges that the businessman deceived American consumers with Trump University, which Rubio calls a "fake university."

"There's a difference between flexibility and telling people whatever you think you need to say to get them to do what you want them to do," Rubio said. "And, that's what Donald has done throughout his career... and that's why Trump University is so relevant here... People borrowed money, and they signed up for this fake university. And, these people owe all this money now, and they got nothing in return for it."

While Rubio and Cruz focused most of their efforts on taking down Trump, Ohio Gov. John Kasich jumped into the debate where he could to stress his experience and pragmatic approach to governing.

"I'm the only person on this stage who actually was the chief architect of balancing the federal budget. It's not a theory for me," Kasich said. "I spent 10 years of my life to get there, and I did not do that because I'm worshiping at some balanced budget shrine. The reason I did it is when you have commonsense regulations, lower taxes on individuals and businesses, and you have a fiscal plan that makes sense, the job creators will expand employment."

For all of their attacks against the front-runner, the three other candidates admitted at the end of the debate that they are prepared to shift their own respective positions, if necessary, on Donald Trump's candidacy.