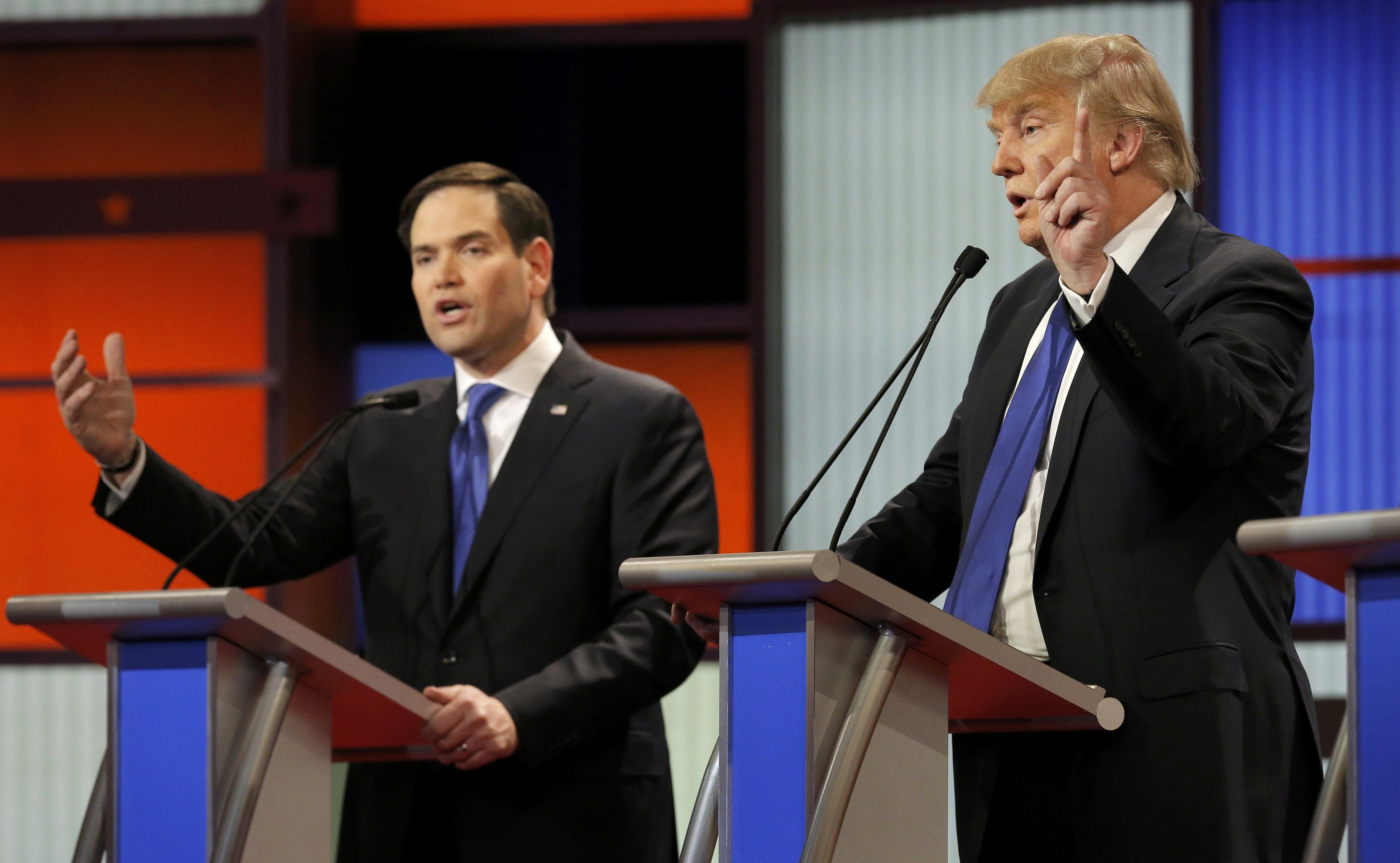 In their closing statements, all four candidates focused on the positive, staying away from attacking each other.

Kasich, up first, said he has a record of "being able to solve some of the biggest problems" as he's done in Ohio. Rubio said the election is "about embracing our opportunities." Cruz spoke to veterans and police officers, saying, "Starting in January 2017, I will have your back." Trump said: "You're going to be very, very proud of this country in just a few years if I'm elected president."

It's been seven months since the first Republican debate in Cleveland, and moderator Bret Baier asked the GOP candidates tonight the same question they were asked then: will they support the eventual GOP nominee, whoever it is? Tonight, asked if they would support Trump as the nominee, Rubio, Cruz and Kasich all said yes.

"Yes, because I gave my word that I would," Cruz said.

Kasich, too, said he'd support him--although "sometimes he makes it a little bit hard," he added.

There's only one candidate on stage who's not jumping into the back-and-forth battles with Trump: Kasich.

When the moderators showed a video his campaign had put out last year, which included video footage of Trump praising Russian President Vladimir Putin, they asked Kasich if he thinks Trump's admiration for Putin sets a bad precedent for U.S.-Russian relations.

"I'm not biting," he said, to cheers from the audience. "Let me just take you around the world, okay?" He continued by explaining that he would provide resources to Eastern European countries threatened by Russia, then make it clear to Putin that an attack on them is an attack on the United States.

In a back-and-forth with Trump, Cruz again suggested Trump learn to calm down and take a deep breath. "Breathe ... breathe ... I know it's hard."

"When they're done with the yoga can I answer a question?" Rubio quipped, interrupting.

Cruz responded by saying he hopes there will be no yoga on stage, and Rubio replied with a reference to Trump: "Well he's very flexible, so you never know."

Trump was asked about his previous support for the federal assault weapons ban, and he said he's changed his mind, calling himself "a big defender of the Second Amendment." "I don't support it anymore, I do not suport the ban on assault," he said.

Cruz pounced, saying: "Well listen, unlike Donald I would not support banning firearms."

Given the debate's proximity to Flint, Mich., where a water crisis has paralyzed the city, Rubio got a question about the handling of that situation. He said he gives Michigan Gov. Rick Snyder credit for being accountable for what happened. "I give the governor credit ... he took responsibility for what happened."

Rubio added that the issue shouldn't be politicized: "All of us are outraged by what happened and we should work together to solve it," he said.

"Count to ten, Donald. Count to ten." After a lengthy Trump-Rubio back and forth, Cruz stepped in and asked Trump to calm down, asking the audience: "Is this really the debate you want playing out in the general election?"

"The stakes are too high," he added, saying the primary lately has been like "going to the circus."

After a heated exchange about Trump University, Trump went after Rubio for his attendance record on votes in the U.S. Senate. "He scammed the people of Florida, he doesn't vote," Trump said. "The people in Florida wouldn't elect him dogcatcher. He is right now 21 points down to me [in Florida]."

Rubio tried to respond, but was repeatedly interrupted by Trump. "As you can see in his answer ... he's defrauded people out of things, and not just on the issue of Trump University," Rubio said.

The next topic of discussion on the debate stage is Trump University, the online education company for which Trump is currently facing an active lawsuit.

"I spoke to one of them who told me exactly what happened: they signed up for this course thinking ... Donald's going to teach them the tricks of the trade," Rubio said. "When they finally realized what a scam it is, they asked for their money back."

Trump fired back: "We will see who's right at the end of a few years, he said, adding that Trump University attendees all filled out report cards for the courses and "almost all of them said it was terrific."

Fox's moderators started the second hour of the GOP debate by playing back video clips of Trump's conflicting positions in the past, including the invasion of Afghanistan, accepting Syrian refugees and whether former President George W. Bush lied to get the U.S. into the Iraq war. How does Trump square those changing positions, Megyn Kelly asked, with his reputation for "telling it like it is?"

Trump went clip by clip, saying he meant Iraq when he said invading Afghanistan was a mistake, and that on the refugee question that he didn't realize how big the number of refugees actually was when he first gave an answer on it.

"Megan, I have a very strong core," he said. "But I've never seen a successful person who wasn't flexible, who didn't have a degree of flexibility."

Asked about former Central Intelligence Agency Director Michael Hayden's comments that the U.S. military might have to disobey Trump's orders if he's elected, Trump said he did not think that would happen. "I've never had any problem leading people," he said. "If I say do it, they're going to do it."

When he got a follow-up question about whether he meant his previous comments about killing terrorists' families, Trump doubled down. "Well, look. When a man flies into the World Trade Center, and his family gets sent back to where they were going ... they knew what was happening. The wife knew exactly what was happening. ... and they watched their husband on television flying into the World Trade Center."

"I have no problem with it," he continued.

The New York Times audio is back in the discussion. Cruz brought it up again during the discussion about foreign workers on Trump properties, saying Trump should be willing to ask for the audio's release if he didn't do anything wrong.

"If you didn't tell them that, the tapes will prove you're innocent," he said. "But if in fact you went to Manhattan and said, 'I'm lying to the American people'..."

Cruz attacked Trump over his use of foreign workers at Trump properties, including the Mar-a-Lago club in Florida. "Donald's record right now, as he's standing here, his record ... is one of repeatedly hiring illegal aliens," he said.

"Wrong," Trump interjected. He gave the same defense he's given in past debates for the hiring practices at his Florida club: that American workers did not want a part-time, seasonal job.

Trump got a question about the reportedly softer tone he took on immigration in an off-the-record meeting with the New York Times editorial board in January--and in his answer, Trump brought out the general-election message about deal-making he's stressed on the campaign trail in the last few days.

As for the immigration comments, Trump suggested he's open to some level of compromise on immigration reform. "There always has to be some tug and pull and deal," he said. "You know when I watched Ted stand on the Senate floor, I had great respect for what he did ... in the meantime, what came of it? Nothing."

Cruz was asked about Alabama Sen. Jeff Sessions's decision to endorse Trump, and whether it's a problem for him that his close ally on the issue of immigration chose Trump over him.

He continued, noting Trump's past donations to Democratic candidate Hillary Clinton: "Donald Trump has written checks to Hillary Clinton not once, not twice, not three times -- ten times."

Asked to explain whether he himself has ever created jobs, Rubio turned his answer into an attack on Trump and his company's use of foreign labor. If Trump is serious about supporting American companies, Rubio said, "he can start tonight by announcing all the Donald J. Trump clothing will be made" in the United States, not China or Mexico.

Trump fired back, saying, "I will do that, and I have been doing it more and more." The problem with cutting back on labor in places like Mexico and China, Trump said, is "they devalue their currencies and they make it impossible for clothing-makers in this country" to make everything in the U.S.

Rubio said Trump won't actually move his clothing production to the U.S. "The reason he makes it in China or Mexico is he can make more money on it, thats why he's doing it."

What is Kasich's path forward? Asked by moderator Brett Baier whether a contested convention is his only shot at the GOP nomination, the Ohio governor replied: "Well, Brett, I think we're all really there."

He said he's been consistently underestimated in the race. "Guess what? It's now March Madness and we're heading up North to my turf, okay? And let me just tell you this: I will win Ohio."

Yes, Trump went there. When responding to a question about his insulting comments toward other candidates, Trump made reference to Rubio's comments that he has "small hands," saying no one has ever done that before. "He hit my hands--nobody has ever hit my hands," Trump said. "Look at those hands, are they small hands?"

If by referring to his hands Rubio was suggesting "something else must be small," Trump said: "I guarantee you there's no problem."

"Well look, he was a failed candidate," Trump said, adding Romney "just wants to be back in the game." "He should have beaten President Obama very easily, he failed miserably and it was an embarrassment."

And then there were four.

After retired neurosurgeon Ben Carson's announcement Wednesday that he does not see a "path forward" for his campaign, the candidates on the stage in tonight's Republican debate will be down from 17 to just four: businessman Donald Trump, Florida Sen. Marco Rubio, Texas Sen. Ted Cruz and Ohio Gov. John Kasich.

Coming on the heels of big victories for Trump on Super Tuesday, tonight might be the last chance for one of Trump's rivals to curb the frontrunner's momentum. After his victories in New Hampshire, South Carolina, Nevada and seven of the Super Tuesday states, the Republican establishment is scrambling to keep Trump from getting the GOP nomination.

The debate, which begins at 9 p.m. on Fox News, will be moderated by Chris Wallace, Megyn Kelly and Bret Baier.