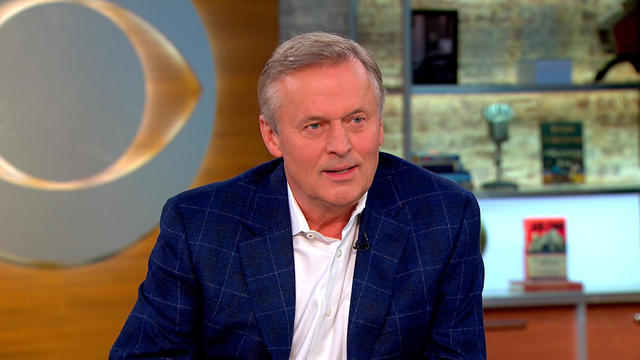 John Grisham is known as the master of legal thrillers. He has 30 consecutive No. 1 New York Times fiction best-sellers and has sold more than 300 million copies of his books worldwide. Grisham's 25th legal thriller, "The Rooster Bar," explores the world of for-profit law schools through a group of students who learn their school is owned by a shady hedge fund operator.

Grisham told "CBS This Morning" he was inspired to write the novel after reading an investigative article in The Atlantic about for-profit law schools and the crisis of student debt in the U.S.

"It was an investigative piece by Paul Campos published three years ago in The Atlantic and I somehow stumbled across it. I was not familiar with for-profit law schools and I was not really familiar with the student debt crisis. And the article really opened my eyes. It was a great piece but also a troubling issue and I started researching and the novel was quickly born from that."

According to the American Bar Association, there are currently six for-profit law schools in America that are accredited. One of them, the Charlotte School of Law, was recently closed.

"Not all the schools are shady. There are a lot of success stories from these schools, but the levels of debt that these students incur, and then they pass it off in the form of high tuition to people who are making a profit. That just struck me as being wrong."

The more than 44 million Americans who have borrowed money to pay for college owe over $1.4 trillion in student loan debt.

In Grisham's new novel, a group of third-year students at fictional Foggy Bottom Law School are facing a mountain of debt and having trouble finding jobs. When they find out that their school is owned by a hedge fund operator who is making a profit off the university, they decide to drop out.

"They can't find jobs, which is fairly accurate with a lot of these schools. A lot of these graduates, their prospects of passing the bar exam are rather dim because the school isn't a great school," he said.

Earlier this year, Grisham spoke to "CBS This Morning" about another novel of his, "Camino Island," that also borrows from reality. It centers on the heist of the original manuscripts of F. Scott Fitzgerald's novels from Princeton University's library – which is where they actually reside. The author revealed he is heading to the Ivy League university on Wednesday to finally see the manuscripts himself.

"About a month or so after the book came out I got a very nice letter from the head librarian at Princeton saying we love your books, and we love this book, would you come visit us. So I'm going tomorrow to see the Fitzgerald manuscripts and to speak on campus," he said.

Grisham also addressed why he never uses a preface.

"That's just not the way I tell stories. I like to start with the first chapter, end with chapter 40. No flashbacks, nothing fancy, just a direct storytelling," he said.

At the heart of a good story, he said, is "conflict, suffering, injustice."

A theme he tends to avoid in his writing? Romance.

"Well, I don't do sex very well," he admitted. "Most men cannot write good sex. I tried one time years ago and showed it to my wife and she felt like laughing."

"The Rooster Bar" is now available.