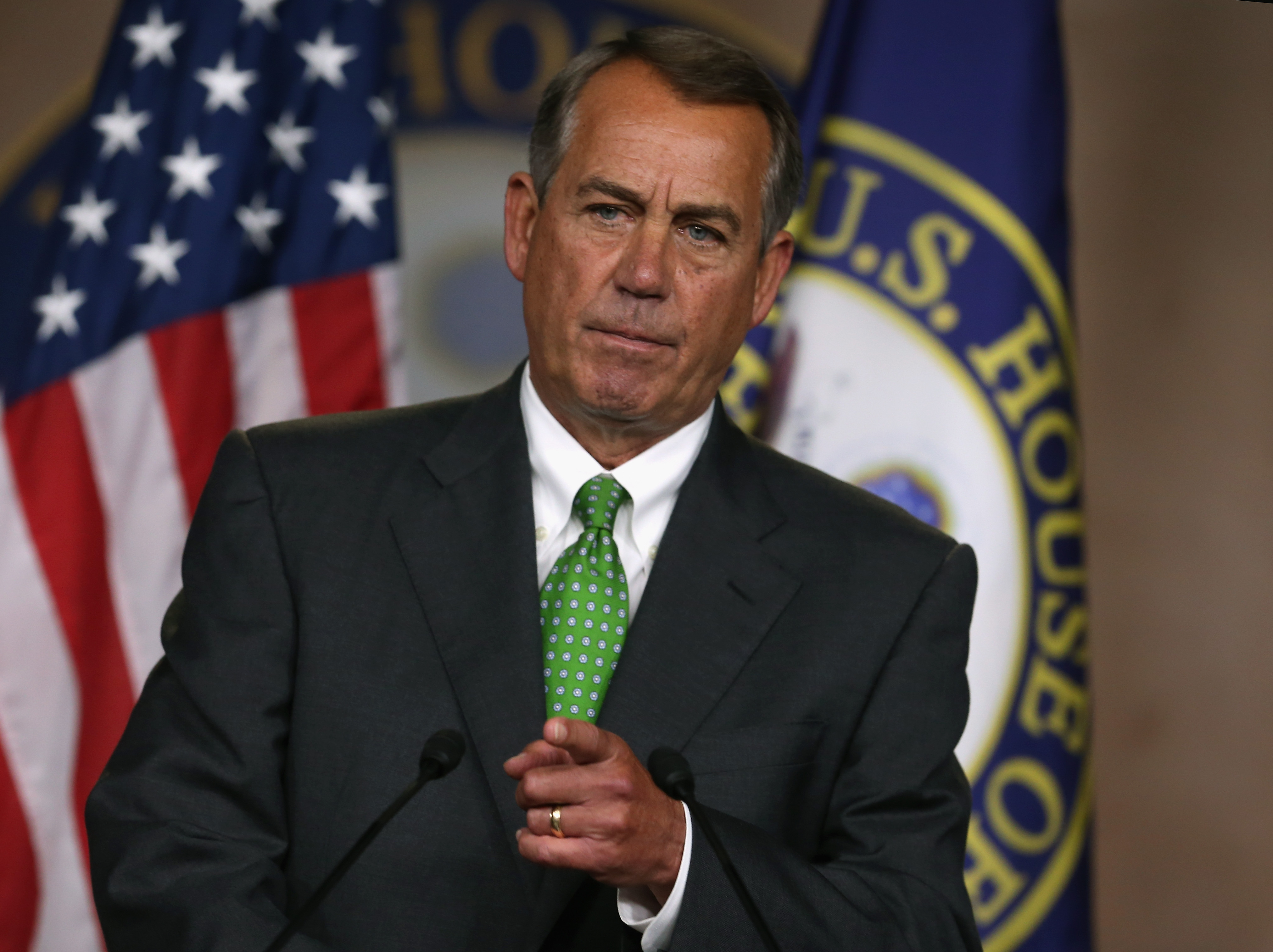 House Speaker John Boehner, R-Ohio, is backing President Obama's request for authorization to train and equip moderate rebels in Syria, telling reporters Thursday, "We ought to give the president what he is asking for."

At the same time, the Republican leader is raising questions about the overall strategy the president laid out in an address Wednesday night, in which he said he would expand U.S. airstrikes to Syria in an effort to combat the Islamic State of Iraq and Syria (ISIS) "wherever they exist."

"While I support the president's plan to train and equip Iraqi security forces and the Syrian opposition, I remain concerned those measures could take years to fully implement at a time when ISIL's momentum and territorial gains must be halted and reversed immediately," Boehner said, using an alternate acronym for the group.

While Boehner's support is key for the White House, it's not clear his entire conference is behind him. Republican members huddled for about two hours Thursday morning to talk before heading to a briefing from administration officials.

Boehner said a lot of members "don't feel like the campaign that was outlined last night will accomplish the mission that the president says... frankly, a lot more needs to be done than what was laid out last night," he said.

Some members trickling out of the meeting voiced that concern.

"I can't vote for what the president proposed, because there was nothing new last night in the president's speech," said Rep. Michele Bachmann, R-Minnesota. "He wants to continue the same failed strategy, but he wants to make it even worse by giving even more money to the so-called vetted moderates, who aren't moderate at all."

Though Bachmann ducked the question of whether she would vote to put combat troops on the ground, she said, "If the United States goes in to defeat this enemy, we need to control this war." The president has said U.S. troops will not engage in ground combat.

But he also said the chance of success is not high.

"The Syrian opposition is a very weak group. They're much weaker than they were two years ago, this is the long pole in the tent, this is what's going to be hard," Morell said.

Others expressed broad concern for the strategy, but said Mr. Obama should be more aggressive.

House Homeland Security Chairman Mike McCaul, R-Texas, said there was "broad support" to be found within the Republican conference, but he wants to hear more from the president about destroying ISIS.

"You hear a lot about degrading, to me that sounds weak. We want a very strong message to destroy and defeat them wherever they exist, and to give the president that authority," McCaul said.

Senior administration officials have compared the president's strategy for Iraq and Syria to counterterrorism campaigns that have been used in Somalia and Yemen over the past several years to continue killing members of al Qaeda's leadership as a way to reduce the threat from the terror group. But the president did say Wednesday that the U.S. objective is to, "degrade, and ultimately destroy, ISIL."

"I would like to see whatever we vote on, probably next week, to be one that has our imprimatur, our Republican stamp, in support of the president with our language, and the broader scope of defeating and destroying them wherever they exist," McCaul said.

Democrats have largely been supportive of the president and say they do not believe Mr. Obama needs further authorization to carry out the airstrikes and other parts of the strategy he laid out.

"We believe, as the president has stated, that he has the authority he needs to take the actions he described last night in his comprehensive strategy to defeat ISIS," Pelosi told reporters Thursday.

She urged the House to give the president the authority he has requested to train Syrian rebels, and to attach it to the short-term spending bill thechamber is considering now. Some members have suggested Mr. Obama's request deserves separate consideration.

"There is some merit to debating it separately because we are talking about war and peace which is a very serious issue," McCaul said.

And even some Democrats, including Rep. Adam Smith, D-Wash., the top Democrat on the House Armed Services Committee, say Congress should give the president authorization even if he doesn't need it.

"I do think that Congress should do an authorization for the use of military force on this," Smith told reporters Thursday. "This is happening. If the legislative branch wants to speak, it should speak."

On the Senate side, Minority Leader Mitch McConnell, R-Kentucky, has been less forthcoming than Boehner about whether he supports the president's plan.

"I'm glad the president has brought a new focus to the efforts against ISIL. He needs to take this responsibility head on. This Congress, the next Congress and the next administration have serious work ahead as we consider this multi-year commitment and what it will take to defeat ISIL," McConnell said on the Senate floor Wednesday morning.

Senate Majority Leader Harry Reid was supportive, saying that although he was waiting on the House to act first he expects Congress will approve Mr. Obama's request.

"Matters like this are no place for political posturing. Now it the time for us to come together to speak with one voice and tell the terrorists you cannot hide, you've committed horrific acts that threaten the security of the United States and our allies, and we will find you and we will destroy you," he said.