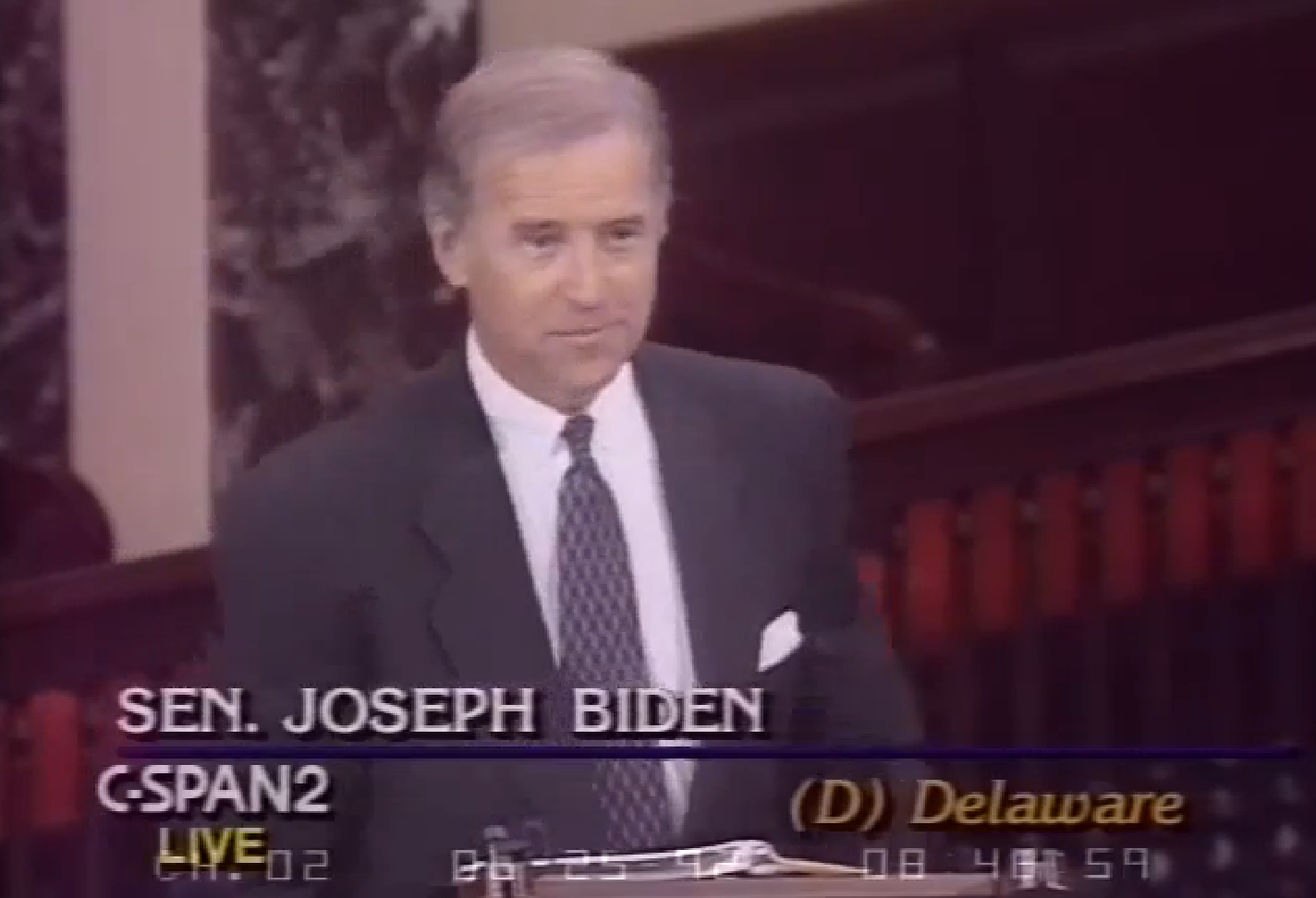 In 1992, then-Sen. Joe Biden said something that won't look good for his boss today.

"It is my view that if a Supreme Court justice resigns tomorrow or within the next several weeks, or resigns at the end of the summer, President Bush should consider following the practice of a majority of his predecessors and not, and not name a nominee until after the November election is completed," said Biden, who was then chairman of the Senate Judiciary Committee, on June 25, 1992.

In fact, he said that if President Bush put forward a nominee, the Judiciary Committee - his committee - should "seriously consider not scheduling confirmation hearings on the nomination until after the political campaign season is over."

The video was posted by C-SPAN Monday.

Biden's boss, President Obama, is currently involved in this very same battle with the Republican-held Senate following the sudden death of Supreme Court Justice Antonin Scalia earlier this month. Within hours of Scalia's death, Senate Majority Leaders Mitch McConnell said the Senate should wait to fill Scalia's seat until a new president is elected in 2016. Most Republican senators and all of the presidential candidates have said the same thing.

But Mr. Obama has said he plans to nominate "a very well-qualified candidate" to the court and has said the Senate must do its job and vote on the nomination.

"When there is a vacancy on the Supreme Court, the president is to nominate someone, the Senate is to consider that nomination and either they disapprove of that nominee or that nominee is elevated to the Supreme Court of the United States," he said at a press conference in California marking the end of a two-day summit between the U.S. and leaders from Southeast Asian nations.

"There is no unwritten law that says it can only be done in off-years," Mr. Obama said, asserting that he has the right to appoint a judge even though it's an election year and Republicans say the next president should have that privilege.

Current Senate Judiciary Chairman Chuck Grassley, R-Iowa, almost immediately picked up on Biden's words and repeated them on the Senate floor Monday to bolster his argument that the body should consider a nominee from Mr. Obama.

"Senator Biden, my friend from Delaware...knows what the Senate should do. And in his heart of hearts he understands why the Senate must do what he said in 1992 it should do," Grassley said.

At least one Republican has broken with McConnell and said that President Obama should nominate someone to replace Scalia.

"I swore an oath to protect and uphold the constitution. That oath is to our constitution, not to a party or any one individual, but to the ideals that bind our nation," Sen. Mark Kirk, R-Illinois, wrote in an op-ed in the Chicago Sun-Times Monday. "In that role, I recognize the right of the president, be it Republican or Democrat, to place before the Senate a nominee for the Supreme Court and I fully expect and look forward to President Barack Obama advancing a nominee for the Senate to consider. I also recognize my duty as a senator to either vote in support or opposition to that nominee following a fair and thorough hearing along with a complete and transparent release of all requested information."

Kirk advised the president to nominate someone "who can bridge differences" and "find common ground."

Vice President Biden released a statement on Monday night responding to his 1992 speech.

"Some critics say that one excerpt of my speech is evidence that I oppose filling a Supreme Court vacancy in an election year," the statement read in part. "This is not an accurate description of my views on the subject. In the same statement critics are pointing to today, I urged the Senate and White House to work together to overcome partisan differences to ensure the Court functions as the Founding Fathers intended. That remains my position today."

During his 1992 speech, Biden sought to head off critics who would accuse him of partisanship. He said he was sure that critics would say "it was nothing more than an attempt to save a seat on the court in hopes that a Democrat will be permitted to fill it."

"But that would not be our intention," Biden said. "If that were the course were to choose as a Senate, to not consider holding hearings until after the election, instead, it would be our pragmatic conclusion that once the political season is underway -- and it is -- action on a Supreme Court nomination must be put off until after the election campaign is over. That is what is fair to the nominee, and essential to the process."

The vice president had more to say on the topic on Twitter, however, Monday night.

And he added this:

There was also more to that floor speech, too, as Biden suggested in his first tweet on the topic. The Center for American Progress Action Fund posted another clip to YouTube which it says is 10 minutes later in the same speech released by C-SPAN. In this clip, Biden called for compromise on nominees.

"But I believe that so long as the public continues to split its confidence between the branches, compromise is the responsible course, both for the White House and for the Senate. Therefore, I stand by my position, Mr. President," Biden said. "If the president consults and cooperates with the Senate or moderates his selections absent consultation, then his nominees may enjoy my support, as did Justices Kennedy and Souter, but if he does not, as is the president's right, then I will oppose his future nominees, as is my right."