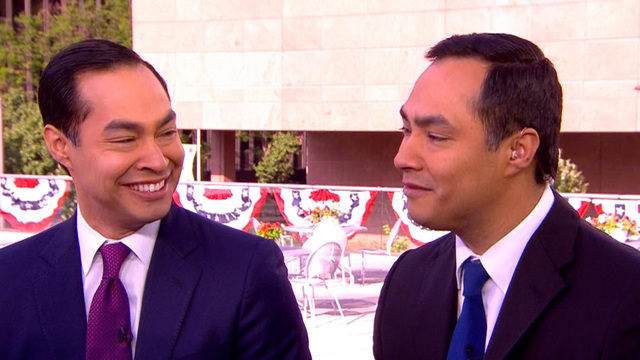 Democratic Rep. Joaquin Castro on Tuesday left the door open to possibly challenging Republican Sen. Ted Cruz for Senate in Texas when he's up for re-election in 2018.

In an interview on "CBS This Morning," he and his twin brother Julian Castro, the secretary of Housing and Urban Development, were asked who plans to run against Cruz in two years.

"Probably zero of us. Right now, that's not in our plans to run in Texas," Julian Castro said.

"Well, he's speaking for himself," Joaquin Castro eventually interjected. "I'm going to take a look at it in 2018. I'll take a look at that and other opportunities. I've never been somebody who's said in two years, I absolutely need to run for senate or governor."

Asked if they would consider taking over the Democratic National Committee now that Debbie Wasserman Schultz has announced her resignation as its chairwoman, Julian Castro said, "I have no interest in that."

"You never say never, but it hasn't been on my radar," said Joaquin Castro, who is scheduled to address the Democratic National Convention in Philadelphia on Thursday night.

Joaquin Castro also slammed Donald Trump for the type of campaign he's run on the Republican side.

"There has been a lot of anger stoked by people like Donald Trump and Ted Cruz," he said. "This year, the Republican Party and Donald Trump have taken that to a very dark and gloomy place."

Both brothers predicted that Trump's inflammatory comments about Mexican immigrants will turn out Hispanic voters in November to the polls.

"Our grandmother came here from Mexico as a six-year-old orphan in 1992. For a lot of Hispanics, listening to Donald Trump talking about Mexican immigrants being rapists and murderers, that's gonna get them to to go to the polls," Joaquin Castro said.