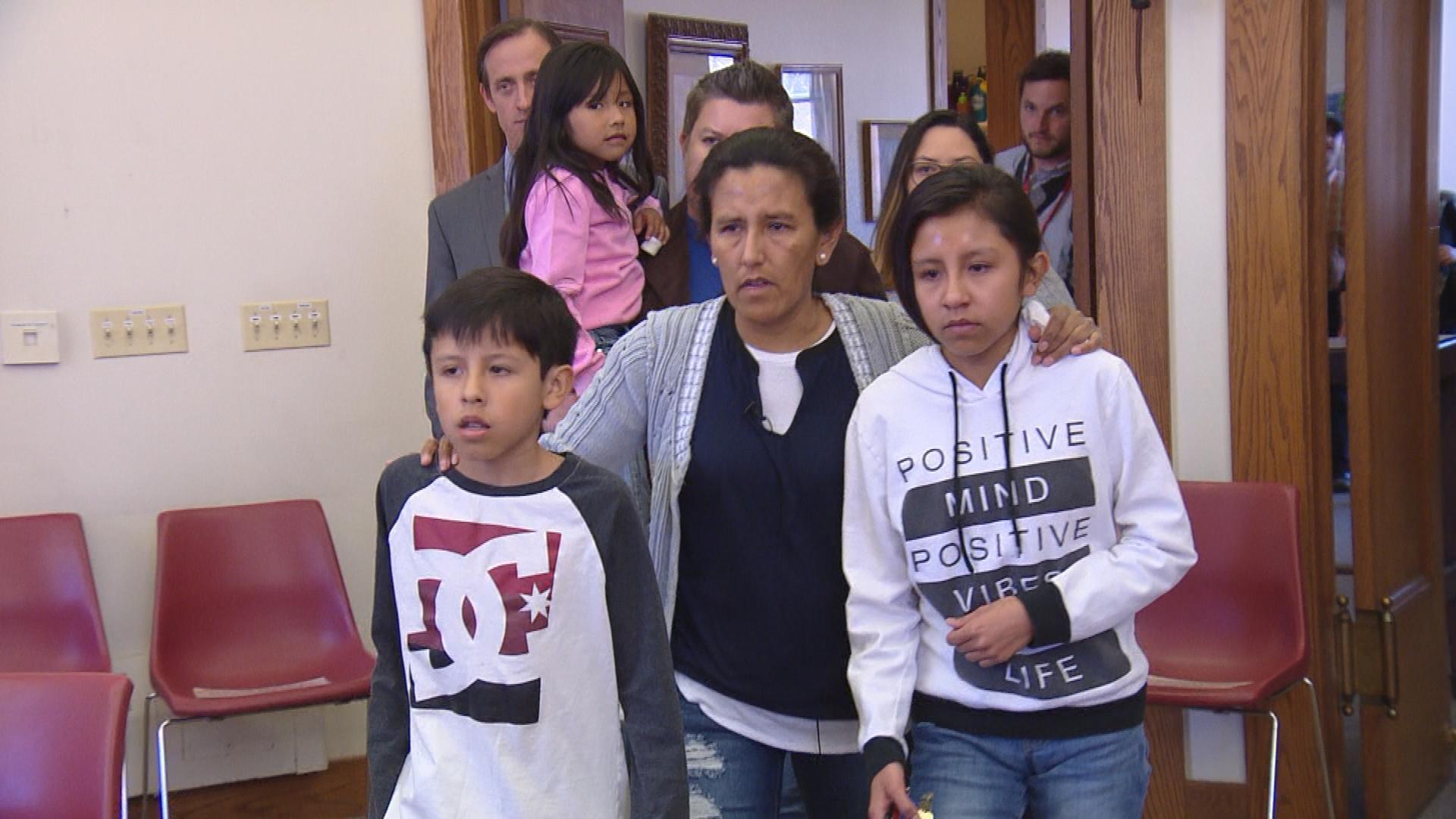 CENTENNIAL, Colo. -- A Mexican woman trying to avoid deportation took refuge in a Denver church Wednesday after U.S. immigration authorities denied her request to remain in the country, the latest case to rattle the immigrant community as the White House promises to boost enforcement.

Jeanette Vizguerra skipped her scheduled check-in with Immigration and Customs Enforcement officials in the suburb of Centennial. About 100 supporters demonstrated outside the building as her attorney, Hans Meyer, and a minister went inside.

They said they were met by a lobby full of agents, a few of them armed, and were told Vizguerra would not get another extension as she tries to obtain a U visa, sometimes given to crime victims.

Vizguerra came to the U.S. 20 years ago, CBS Denver reports. She has a radio show and is active in immigrant affairs. In 2009, she was convicted of using a fake Social Security number that she says she needed to continue working.

ICE spokesman Shawn Neudauer said Vizguerra was an “enforcement priority” because she had two misdemeanor convictions and a judge originally issued final deportation orders for her in 2011.

Meyer said Vizguerra had been granted several previous extensions under the Obama administration because officials realize it can take two or three years to obtain the visa.

“This is a big, huge red flare that the Trump administration has plans to deport as many people as possible,” said Meyer, who declined to disclose details of the crime to which Vizguerra was a victim.

Mr. Trump has made cracking down on illegal immigration a priority, declaring plans to build a border wall, threatening to cut funding to cities that don’t cooperate with federal immigration authorities and issuing an executive order making it clear that just about any immigrant in the country illegally could be a priority for deportation, particularly those with outstanding deportation orders.

ICE’s Neudauer would not say whether denying Vizguerra’s request for an extension was a change in policy.

Vizguerra took refuge in the church, a common tactic to avoid deportation because authorities generally don’t enter places of worship, as immigrant advocates called for the release of 23-year-old in Washington state who was detained despite participating in a federal program to protect those brought to the U.S. illegally as children.

She said she was thinking of Daniel Ramirez Medina as well as Guadalupe Garcia de Rayos, an Arizona woman arrested during a routine ICE check-in and deported to Mexico the next day, before taking sanctuary.

Vizguerra, crying at first, spoke in Spanish by phone through a bullhorn to supporters outside the ICE building and later in person at the First Unitarian Church not far from the state Capitol.

With three of her four children joining her on the altar, the former union organizer and house cleaner said her only crimes were related to working in the country illegally to support her family.

She said she was arrested for not having a driver’s license or current vehicle registration. Officers also discovered that she had a forged identity document, which she said had a Social Security number made up of digits from her birth date, not one that belonged to an actual person.

Vizguerra said she told her children last week of her decision to stay in a basement room of the church that they had painted in 2014 in preparation for any immigrant who might need to seek sanctuary.

“This is not just an attack on me, it’s an attack on the entire immigrant community,” Vizguerra said, CBS Denver reports.

“The only thing that I’ve done is use false documents to put food on the table of my family,” she said through a translator. She said Mr. Trump is “not thinking right now about how my children feel, wondering how long I’ll have to live in this church.”