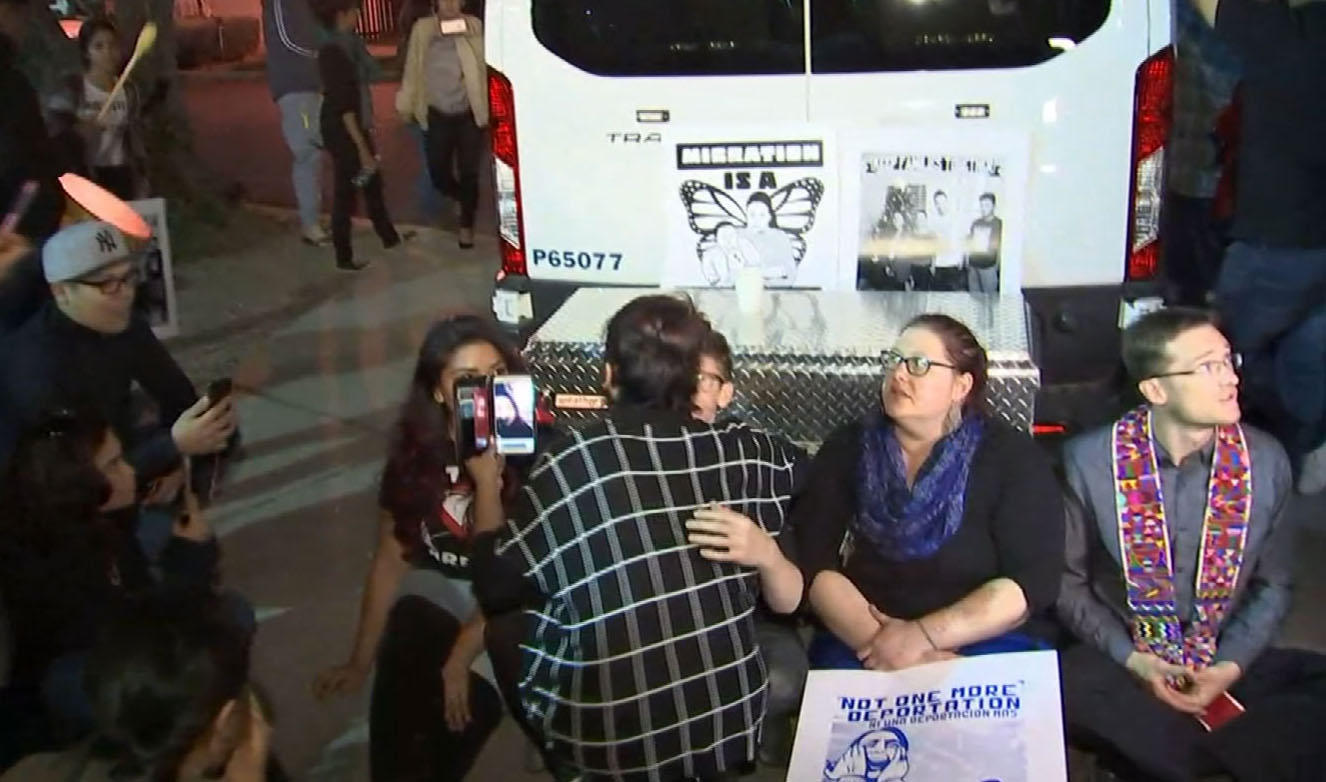 PHOENIX -- The deportation of an immigrant mother in Phoenix who was granted leniency during the Obama administration provides an early example of how President Trump plans to carry through on his vow to crack down on illegal immigration.

U.S. Immigration and Customs Enforcement (ICE) confirmed to CBS News that Garcia was deported to Mexico Thursday morning. Garcia was the subject of a court-issued removal order that became final in July 2013 after going through multiple levels of the immigration court system, ICE said in a statement.

ICE also said Garcia has a prior felony conviction in Arizona for criminal impersonation.

White House spokesman Sean Spicer referred questions on the matter to Immigration and Customs Enforcement, which said in a statement on Twitter on Thursday that the agency “will remove illegal aliens convicted of felony offenses as ordered by an immigration judge.”

Garcia de Rayos came to the U.S. from the Mexican state of Guanajuato when she was 14 and has two children who are U.S. citizens, said the Puente Arizona immigrant advocacy group based in Phoenix.

“She’s always there for me. No one should ever have to go through this,” her 16-year-old son Angel told CBS affiliate KPHO-TV after she was detained Wednesday.

She was deported around 10 a.m. Thursday from a Nogales border crossing and ICE worked with Mexican consular officials to repatriate her, agency spokeswoman Yasmeen Pitts O’Keefe said in a statement.

“Ms. Garcia’s immigration case underwent review at multiple levels of the immigration court system, including the Board of Immigration Appeals, and the judges held she did not have a legal basis to remain in the U.S. ICE will continue to focus on identifying and removing individuals with felony convictions who have final orders of removal issued by the nation’s immigration courts,” Pitts O’Keefe wrote.

Advocates for people in the U.S. illegally but with deep ties to the country denounced the deportation as heartless.

“ICE has done what President Trump wanted to do, which is deport and separate our families,” said Marisa Franco, director of the Phoenix-based advocacy group Mijente. “We are going to stand strong with the family.”

Garcia de Rayos, 35, was among workers arrested years ago in one of then-Sheriff Joe Arpaio’s first investigations into Phoenix-area businesses suspected of hiring immigrants who had used fraudulent IDs to get jobs.

She was accused of using a Social Security number belonging to another person to get a job at the Waterworld amusement park in the Phoenix suburb of Glendale.

Garcia de Rayos was not arrested in a raid of the park, but was taken into custody six months later when investigators found discrepancies in her employment documents.

She was denied bail in January 2009 under an Arizona law that prohibited it for immigrants who are in the country illegally and charged with certain felonies.

Garcia de Rayos pleaded guilty in March 2009 to a reduced charge of criminal impersonation and was sentenced to two years of probation. She was placed into deportation proceedings but given leniency.

On Wednesday, she showed up with her lawyer for what she thought was a routine check-in with ICE officials and was detained instead of being allowed to leave after checking in.

Her lawyer, Ray Ybarra Maldonado, said the action against his client could push immigrants deeper into the shadows and to avoid checking in with authorities like Garcia de Rayos always did.

Police took positions around the building and confronted some of the demonstrators, many of them chanting “Justice!” in English and Spanish.

The deportation of Garcia de Rayos came days after the Trump administration broadened regulations under which some people will be deported.