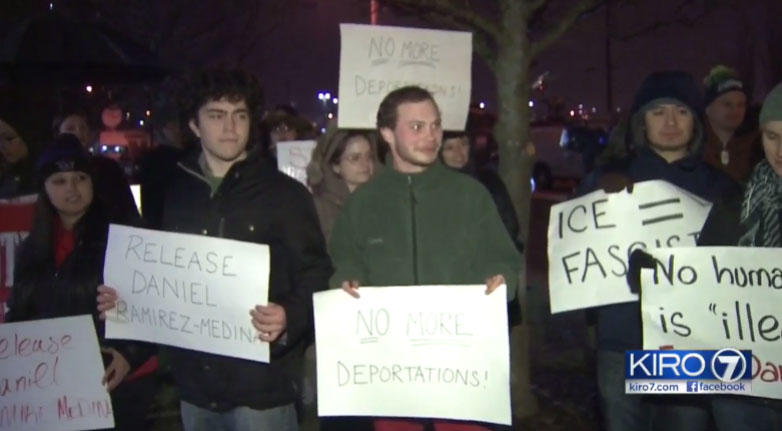 SEATTLE -- A man who was brought to the U.S. illegally as a child but was protected from deportation by the Obama administration has been taken into custody in the Seattle area in what could be the first case of its kind in the country.

Daniel Ramirez Medina, 23, was detained Friday by U.S. Immigration and Customs Enforcement agents who went to the suburban Seattle home, in Tacoma, to arrest the man’s father. ICE spokeswoman Rose Richeson said in a statement that agents were there targeting a “prior-deported felon.”

Medina is suing the federal government over his arrest and detention.

Ramirez was brought to the U.S. from Mexico when he was 7 and has a work permit under Obama’s Deferred Action for Childhood Arrivals program. He also has a job, a young son and no criminal record, Northwest Immigrants Rights Project Legal Director Matt Adams said. Ramirez is being held in Tacoma.

“Mr. Ramirez -- a self-admitted gang member -- was encountered at a residence in Des Moines, Washington, during an operation targeting a prior-deported felon,” U.S. Immigration and Customs Enforcement spokeswoman Rose Richeson said in a statement.

An ICE official told CBS News that there is corroborating evidence to support Ramirez is in a gang.

Richeson said Ramirez told agents he was a gang member and based on those statements and being a “risk to public safety,” he was taken into custody.

But Mark Rosenbaum, one of Ramirez’s lawyers, responded later Tuesday that Ramirez “unequivocally denies being in a gang” and that the statement from Richeson is inaccurate.

“While in custody, he was repeatedly pressured by U.S. Immigration and Customs Enforcement agents to falsely admit afiliation,” Rosenbaum said.

Ramirez’s only court record in Washington is a speeding ticket from 2016 in which a State Patrol trooper said Ramirez went 5 miles over the speed limit in Thurston County, KIRO reports. He paid the $150 fine and the case was deferred, according to court records.

Adams said Ramirez is the first person he knows of with DACA status who has been detained.

“This appears to be a complete one-off. We certainly haven’t seen this with our other hundreds of clients who have DACA status as well.”

An ICE official told CBS News that while it is not common, DACA recipients have previously been arrested during enforcement operations in the past. Those detained, by their criminal convictions or affiliation, fall into ICE enforcement priorities including threats to national security or public safety, the official said.

Attorneys for Ramirez challenged his detention in federal court in Seattle Monday, arguing the arrest violates his constitutional rights to live and work in this country without the fear of arrest and deportation so long as he satisfies DACA requirements.

“Trust in our government depends upon the Executive Branch keeping its word,” Ramirez attorney Mark Rosenbaum, director of Public Counsel’s Opportunity Under Law Project, said in a statement. “Bait and switch sullies the integrity of our nation’s core values.”

Emily Langley, a spokeswoman for the US attorney’s office in Seattle, said Tuesday afternoon it would be premature to comment on the lawsuit. A hearing in the case has been scheduled for Friday in federal court in Seattle.

Recent sweeps by U.S. immigration agents across multiple states have netted some immigrants with no criminal records, a departure from enforcement actions in the last decade. Under the Obama administration, agents focused more narrowly on individuals who posed a security or public safety threat.

President Trump made illegal immigration a cornerstone of his campaign, saying he will build a wall along the Mexican border and deport millions of people, although actual plans have yet to be revealed. He has said he wants to focus on people who have committed crimes.

During an interview with Time magazine late last year, Mr. Trump expressed sympathy for the more than 740,000 people in the DACA program, which started in 2012.

“We’re going to work something out that’s going to make people happy and proud,” he told the magazine.

Mr. Trump can withdraw the promised protection right away through an “operational memo” because Obama implemented it through one, William Stock, president of the American Immigration Lawyers Association, said previously.

Adams said he believes Ramirez was apprehended by mistake.

“I don’t think this has to do with any change in policy; I just think it was an enforcement procedure gone wrong,” Adams said. “Hopeful they’re going to come to their senses.”