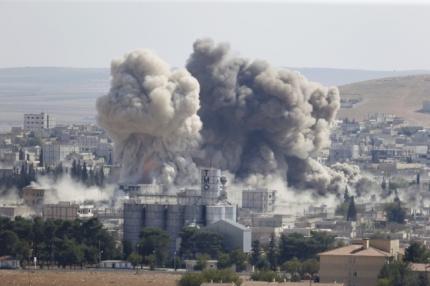 MURSITPINAR, Turkey -- Several Syrian human rights groups called on the world to save the embattled Syrian Kurdish town of Kobani from falling into the hands of the Islamic State of Iraq and Syria (ISIS) as new U.S.-led airstrikes targeted the extremists near the town Wednesday.

The strikes are part of a wave of U.S.-led coalition bombing this week that aims to prevent ISIS fighters from capturing the town. An activist group said the strikes killed at least 45 militants since late Monday, forcing them to withdraw from parts of Kobani.

The U.S. military confirmed in a statement Wednesday that, in conjunction with aircraft from the United Arab Emirates, it carried out a total of nine strikes inside Syria. The statement from U.S. Central Command (CENTCOM), said there were five strikes around Kobani, primarily targeting ISIS military vehicles and artillery.

The dramatic appeal by human rights groups to save the town came after ISIS fighters -- despite the airstrikes -- managed to push into parts of Kobani, located on the Syria-Turkish border and also known by its Arabic name of Ayn Arab.

Kobani has been under the onslaught of ISIS since mid-September when the militants' launched their offensive in the area, capturing several Kurdish villages around the town and bringing Syria's civil war yet again to Turkey's doorstep.

The fighting has forced some 200,000 of the town residents and villagers from the area to flee and seek shelter across the frontier in Turkey. Activists also say that more than 400 people have been killed in the fighting.

But in spite of the pleas to save the town, a Pentagon official told CBS News correspondent David Martin on Tuesday that the U.S. simply does "not have the capability to save Kobani from the air."

According to the source, the Kurdish fighters defending Kobani are not well enough organized to take advantage of the strikes.

"It seems that Kobani is becoming a public lesson in the limits of American air power," said Martin on the "CBS Evening News with Scott Pelley."

"Kobani is horrible", conceded Martin's Pentagon source, "but right now there is a lot of horrible in Iraq and Syria".

Around noon Wednesday, warplanes believed to be of the U.S.-led coalition bombed positions of ISIS near Kobani. One airstrike, visible from the border, hit a hill and an open space near the town.

The Britain-based Syrian Observatory for Human Rights said Wednesday's strikes targeted ISIS fighters east of Kobani. The CENTCOM statement confirmed strikes to the west and south of the town.

Since Monday night, the strikes killed 45 ISIS fighters in and around Kobani, targeted 20 separate locations with the extremists and destroyed at least five of their vehicles, the Observatory said.

The airstrikes also forced ISIS fighters to withdraw from several streets they had controlled earlier, added the Observatory, which tracks the Syrian conflict through a network of activists on the ground.

Meanwhile, an attack apparently carried out by Kurdish fighters inside the town destroyed a mosque minaret, which ISIS had used as an outlook, activists said.

Heavy gunfire was heard from inside the town in a sign of fresh clashes Wednesday. The Observatory said most of the fighting as in the town's Kani Arban neighborhood.

In their appeal, seven rights groups -- including the Kurdish Organization for Human Rights and the Human Rights Organization in Syria -- said ISIS fighters' offensive on Kobani and their "inhuman practices and measures have taken a clear form of persecution and ethnic cleansing."

The statement also said that the fighting over Kobani has displaced nearly 280,000 people who fled fearing "killings, executions, throat slitting, beheadings, mayhem and kidnaping of women and children."

Also Wednesday, a Kurdish activist said he was detained by Turkish authorities along with 157 residents from Kobani and other activists shortly after they crossed into Turkey three days ago. Mustafa Bali said the detainees include 33 women, nine children and the rest were mostly elder men.

Bali said the activists were to escort Kurdish civilians from Kobani to safety in Turkey, and then cross back.

"They allowed us to cross and once we were in Turkey they detained us," Bali said, speaking to The Associated Press over the phone from a school basketball hall in the Turkish border village of Ali Kor.

The Syrian human rights group also criticized Turkey, saying it was "preventing and hindering the entrance of Kurdish refugees fleeing Syria's northern border from the brutality and terrorist acts" of ISIS.