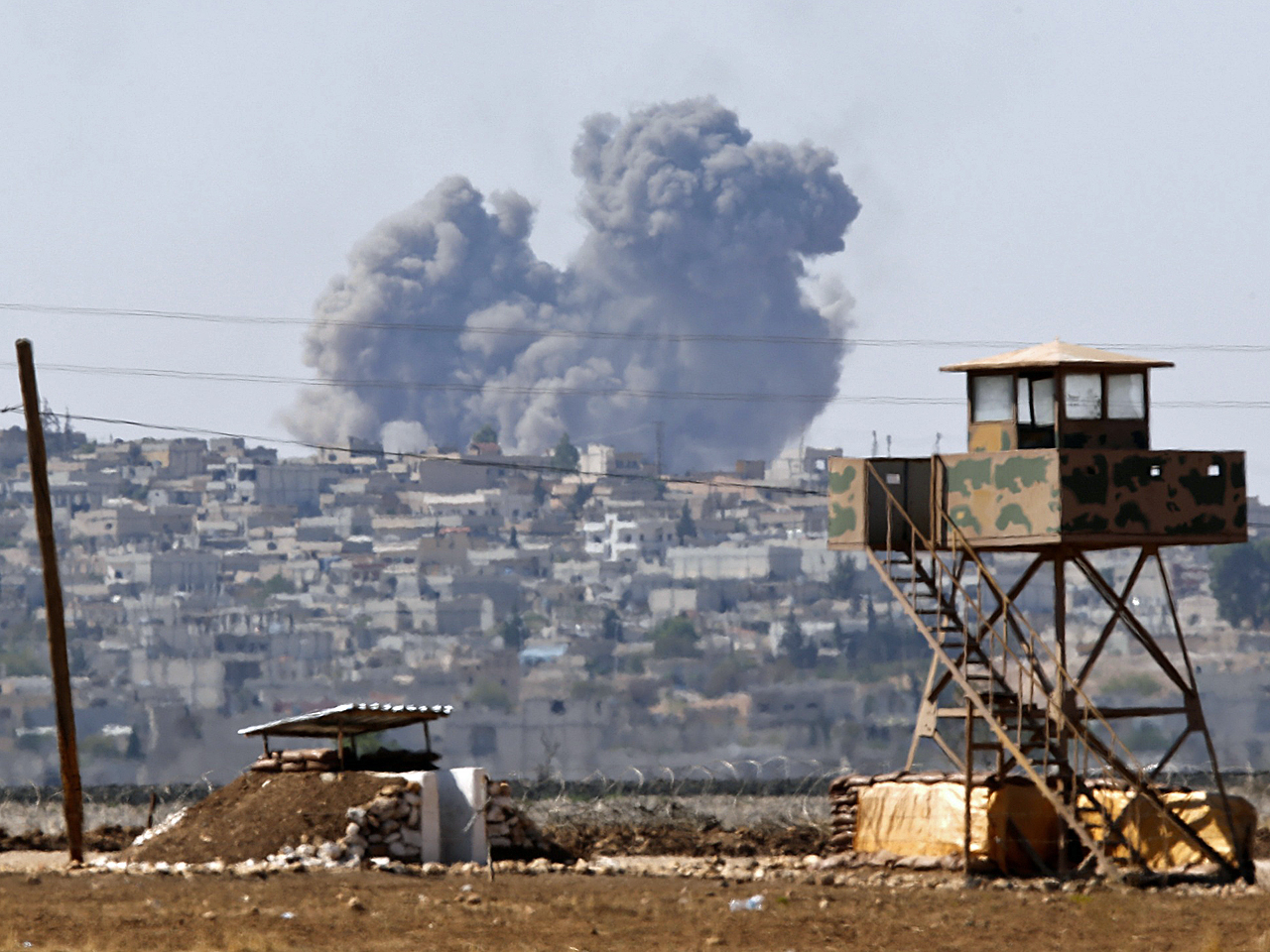 MURSITPINAR, Turkey -- The Islamic State of Iraq and Syria (ISIS) is about to capture the Syrian border town of Kobani, Turkey's president said Tuesday, as outgunned Kurdish forces struggled to repel the extremists with limited aid from U.S.-led coalition airstrikes.

A Pentagon official told CBS News national security correspondent David Martin that the U.S. is not shifting its air campaign in an effort to save Kobani. The official said the embattled town is one of many in Syria and Iraq which are under attack by ISIS. What sets it apart is not its plight but its location on the Turkish border, which makes it possible for the world to watch.

"Kobani is horrible but right now there's a lot of horrible in Iraq and Syria," the official said. "Kobani is not unique."

ISIS fighters using tanks and heavy weapons looted from captured army bases in Iraq and Syria have been pounding Kurdish forces in Kobani for days. Since the extremists' offensive began in mid-September, more than 400 people have been killed in the fighting, activists said.

The beleaguered Kurdish militiamen defending Kobani received some support overnight and Tuesday from the American-led coalition, which carried out six airstrikes against ISIS militants around the town, destroying four armed vehicles, damaging a tank and killing fighters, the U.S. military said.

Much of Kobani's population -- an estimated 160,000 people -- have already fled into Turkey and are living in jam-packed refugee camps.

Turkish President Recep Tayyip Erdogan said the coalition air campaign launched last month would not be enough to halt ISIS' advance and called for greater cooperation with the Syrian opposition, which is fighting both the extremists and forces loyal to Syrian President Bashar Assad.

"Kobani is about to fall," Erdogan told Syrian refugees in the Turkish town of Gaziantep, near the border. "We asked for three things: one, for a no-fly zone to be created; two, for a secure zone parallel to the region to be declared; and for the moderate opposition in Syria and Iraq to be trained and equipped."

Turkish tanks and other ground forces have been stationed along the border within a few hundred yards of the fighting in Kobani - also known as Ayn Arab - but have not intervened. Just days ago, Turkey said it wouldn't let Kobani fall.

Syrian Kurds, however, have scoffed at the rhetoric coming out of Ankara. They say that not only are the Turks not helping, they are actively hindering the defense of Kobani by preventing Kurdish militiamen in Turkey from crossing the border into the town to help in the fight.

"We are besieged by Turkey, it is not something new," said Ismet Sheikh Hassan, the Kurdish defense chief for the Kobani region.

Despite Erdogan's dire assessment, Kurdish forces managed to push ISIS militants out of most of the eastern part of Kobani on Monday, hours after the extremists stormed into neighborhoods on the edge of town, according to the Britain-based Syrian Observatory for Human Rights.

The Kurds may have been helped by a round of airstrikes late Monday against ISIS positions. Two more rounds followed Tuesday morning, when journalists on the Turkish side of the border heard the sound of warplanes before large plumes of smoke billowed just west of Kobani.

The U.S.-led coalition has launched limited airstrikes over the past two weeks near Kobani in a bid to help Kurdish forces defend the town, but the sorties appear to have done little to slow ISIS' advance.

The militants' onslaught has forced more than 200,000 people to flee in recent weeks, Erdogan said. Their flight is among the largest single exoduses of the three-year Syrian conflict.

The Observatory, which relies on a network of activists across Syria, said Tuesday that 412 people have been killed since the Kobani fighting began.

On Tuesday morning, occasional gunfire could be heard in Kobani. A flag of the main Kurdish force known as the People's Protection Units, or YPG, was seen flying over a hill in central Kobani.

Turkey has long suspected the YPG is linked to the Kurdish PKK, which waged a long and bloody insurgency against Ankara. Syria's opposition also has accused the group of conspiring with Assad, charges the YPG denies.

Late Monday, ISIS fighters punctured the Kurdish front lines on the eastern edge of Kobani, and pushed into the town itself.

But the Kurds managed to force the militants to withdraw from most of those areas in heavy clashes after midnight, the Observatory and a senior Kurdish official said. The Observatory added that five loud explosions were heard in the town as warplanes soared overhead.

Idriss Nassan, deputy head of Kobani's foreign relations committee, told The Associated Press that many of the ISIS fighters were forced to withdraw from areas they seized late Monday, although they are still in parts of the eastern neighborhoods of the Kobani.

Kurdish fighters "inflicted heavy casualties among the attackers and prevented them from moving deep into the city," Nassan said.

The Observatory said ISIS fighters were meanwhile able to capture several buildings on the southern edge of Kobani as well as a hospital under construction on the western side.

The Observatory and the Local Coordination Committees, another activist group, also reported coalition airstrikes in the eastern province of Deir el-Zour, which is almost entirely under ISIS control.

The United States and five Arab allies launched an aerial campaign against ISIS in Syria on Sept. 23 with the aim of rolling back and ultimately crushing the extremist group. The U.S. has been bombing ISIS targets in neighboring Iraq since August.