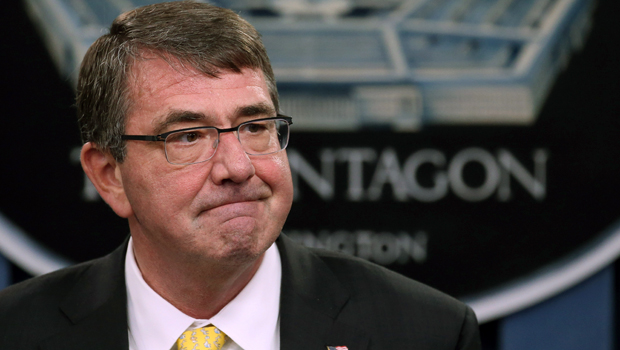 BEIRUT -- U.S. commandos mounted a rare raid into eastern Syria overnight, killing a senior commander for the Islamic State of Iraq and Syria, or ISIS, in a firefight, capturing his wife and rescuing a Yazidi woman held as a slave, the Pentagon said Saturday.

Defense Secretary Ash Carter announced the raid, identifying the militant as Abu Sayyaf. He said no U.S. forces were killed or injured in the operation.

According to Pentagon officials, a U.S. Delta force carried out the raid and killed about a dozen militants, CBS News national security correspondent David Martin reports. There were women and children at the site, but none of them were injured, the officials said.

The raid involved some hand-to-hand combat, Martin reports. The ISIS fighters tried to use the women and children in the compound as human shields.

The raid had been in the works for some time, the Pentagon officials told Martin. U.S. intelligence had been watching Sayyaf for weeks when he suddenly changed locations, and the intelligence community had to start over.

The U.S. commandos had been infiltrated into Iraq over the past couple of weeks as they prepared for the mission, the officials told Martin.

In addition to Sayyaf's wife, Umm Sayyaf, the commandos also seized laptops and cell phones during the raid and brought them back to Iraq to help get a better understanding of ISIS' leadership, Martin reports.

Umm Sayyaf is a suspected member of ISIS who "played an important role" in its terror activities, Carter said.

Sayyaf and his wife knew about the mistreatment of Kayla Mueller, the young American aid worker who died early this year while being held captive by ISIS, Martin reports. The wife will be interrogated by a high-value interrogation team.

A U.S.-led coalition has been striking ISIS militants in Syria since last year, but this is only the second time troops have carried out a ground raid. A previous operation last summer was aimed at rescuing Americans held hostage by the group, but failed to recover any.

Syrian state TV earlier reported that Syrian government forces killed at least 40 ISIS fighters, including a senior commander in charge of oil fields, in an attack Saturday on the country's largest oil field -- held by ISIS. It identified the commander as Abu al-Teem al-Saudi. The name indicates he was a Saudi citizen.

It was not immediately clear why both Syria and the U.S. would claim a similar operation in the Omar oil field. The U.S. has said it is not cooperating with President Bashar Assad's government in the battle against ISIS. But it says it usually gives Damascus a heads-up on operations within its borders.

The Syrian report, which appeared as an urgent news bar on state TV, was not repeated by the state news agency. State TV didn't repeat the urgent news or elaborate on it.

The Britain-based Syria Observatory for Human Rights confirmed an attack on the Omar oil field, saying at least 19 ISIS members, including 12 foreigners, were killed. The group did not say who carried out the attack, but said it was informed that there was an airdrop that followed the airstrikes. The Observatory relies on a network of activists on the ground in Syria.

The U.S. did not provide the full name of the militant identified as Abu Sayyaf. There was no information immediately available on jihadist websites.

Using an acronym for the Islamic State of Iraq and the Levant, a different name for ISIS, a statement from the U.S. National Security Council said Abu Sayyaf was a "senior ISIL leader who, among other things, had a senior role in overseeing ISIL's illicit oil and gas operations -- a key source of revenue that enables the terrorist organization to carry out their brutal tactics and oppress thousands of innocent civilians."

"He was also involved with the group's military operations," it said.

The National Security Council statement said President Obama authorized the operation upon the "unanimous recommendation" of his national security team.

Asked about the timing of the two announcements, National Security Council spokeswoman Bernadette Meehan said the U.S. government did not coordinate with the Syrian government or advise it in advance of the operation.

"We have warned the Assad regime not to interfere with our ongoing efforts against ISIL inside of Syria," she said. "As we have said before, the Assad regime is not and cannot be a partner in the fight against ISIL. In fact, the brutal actions of the regime have aided and abetted the rise of ISIL and other extremists in Syria."

The statement said the commandos rescued a young Yazidi woman "who appears to have been held as a slave" by the slain militant and his wife. ISIS militants captured hundreds of members of the Yazidi religious minority in northern Iraq during their rampage across the country last summer.

The extremist group controls much of northern and eastern Syria as well as northern and western Iraq. It has control of most of the oil fields in Syria, which are a key source of its funding. It has declared a caliphate in the territories under its control and governs them under a harsh version of Islamic law.

The special operation was announced as ISIS fighters were advancing in central and northeastern Syria. The militants are nearing the historic city of Palmyra, in the central province of Homs, and have seized as water facility and an oil field on the city's eastern outskirts, activists said.

The advances in the Palmyra countryside were coupled with an announcement Saturday by ISIS that its fighters have seized full control of Saker Island in the Euphrates River north of Deir el-Zour, the northeastern province divided between areas held by the group and the government.