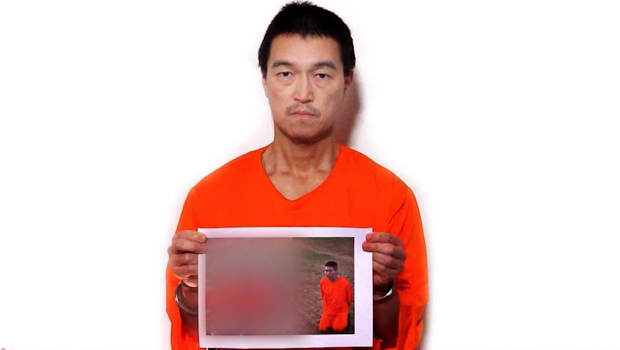 TOKYO -- A visibly shaken Prime Minister Shinzo Abe said early Sunday that Japan was working to free two hostages held by Islamic extremists, calling a new online message purporting to show that one had been killed "outrageous and unforgiveable."

An online video containing an audio message and a photograph purported to show the execution of one of the Japanese hostages, Haruna Yukawa. But the post was deleted quickly Saturday, and militants on a website affiliated with the Islamic State of Iraq and Syria, or ISIS, questioned its authenticity.

The contents of the message could not be verified. It varied greatly from previous videos released by ISIS, which now holds a third of both Syria and Iraq.

The White House released a statement from President Obama condemning ISIS' "brutal murder" of Yukawa, but a U.S. official told CBS News that the U.S. hasn't verified the authenticity of the message.

ISIS had threatened on Tuesday to behead the men within 72 hours unless it received a $200 million ransom. Kyodo News agency reported that Saturday's video was emailed to the wife of the other hostage, Kenji Goto.

Citing the release of the photo claiming to show Yukawa had been killed, Abe said after a late-night Cabinet meeting: "Such an act of terrorism is outrageous and unforgivable. We feel strong indignation, and vehemently condemn the act."

Defense Minister Gen Nakatani said officials were trying to verify the photo shown in the message.

Patrick Ventrell, a spokesman for the White House National Security Council, said U.S. intelligence officials were also working to confirm whether it was authentic. "We stand in solidarity with Japan and are coordinating closely," he said, and called for the immediate release of people held by ISIS.

Abe said the government of Japan will not succumb to terrorism and will continue to cooperate with the international community in the fight against terrorism. He said Japan is still taking every possible step to win the release of both hostages and will continue the effort.

Japan has been struggling to find a way to secure the release of Goto, a 47-year-old journalist, and Yukawa, a 42-year-old adventurer fascinated by war. Japanese diplomats left Syria as the civil war there escalated, compounding the difficulty of reaching the militants holding the hostages.

Militants affiliated with ISIS posted an online warning Friday afternoon that the "countdown has begun" for the extremists to kill the men.

Also Friday, ISIS supporters on Twitter circulated a message saying the two men had been executed and that the terror group was working on a video showing their murder. ISIS did not make any official statements on its own social media accounts or websites.

The Twitter user who sent the message suggesting the two were dead has a long history of sharing the terror group's information but has never been the source of an original announcement. It was unclear whether the user had access to direct information from ISIS members in Syria.

Abe spoke by phone with Jordanian King Abullah II on Saturday, the state-run Petra news agency reported, without elaborating on what they discussed. He also called the two hostages' families.

Goto's mother, Junko Ishido, told Japanese public broadcaster NHK in a televised interview that in the purported message her son, "seemed to be taking seriously what may be happening to him as well."

"This is no time to be optimistic," said Ishido.

But Ishido also was skeptical about the voice claiming to be Goto. "Kenji's English is very good. He should sound more fluent," she said.

One militant on the ISIS-affiliated website warned that Saturday's new message was fake, while another said that the message was intended only to go to the Japanese journalist's family.

A third militant on the website noted that the video was not issued by al-Furqan, which is one of ISIS' media arms and has issued past videos involving hostages and beheadings. Saturday's message did not bear al-Furqan's logo.

The militants on the website post comments using pseudonyms, so their identities could not be independently confirmed by The Associated Press. However, their confusion over the video matched that of Japanese officials and outside observers.

Japanese officials have not directly said whether they are considering paying any ransom. Japan has joined other major industrial nations in opposing ransom payments. U.S. and British officials said they advised against paying.

Foreign Minister Fumio Kishida said he planned to issue a safety warning to all Japanese citizens traveling outside the country through its embassies around the world.

The nightmarish situation had left him, "at a loss for words," Kishida said.

Nobuo Kimoto, a business adviser to Yukawa, told the Japanese broadcaster NHK: "I don't believe this. The world is far from a peaceful place," he said. "I wish this was some kind of a mistake."