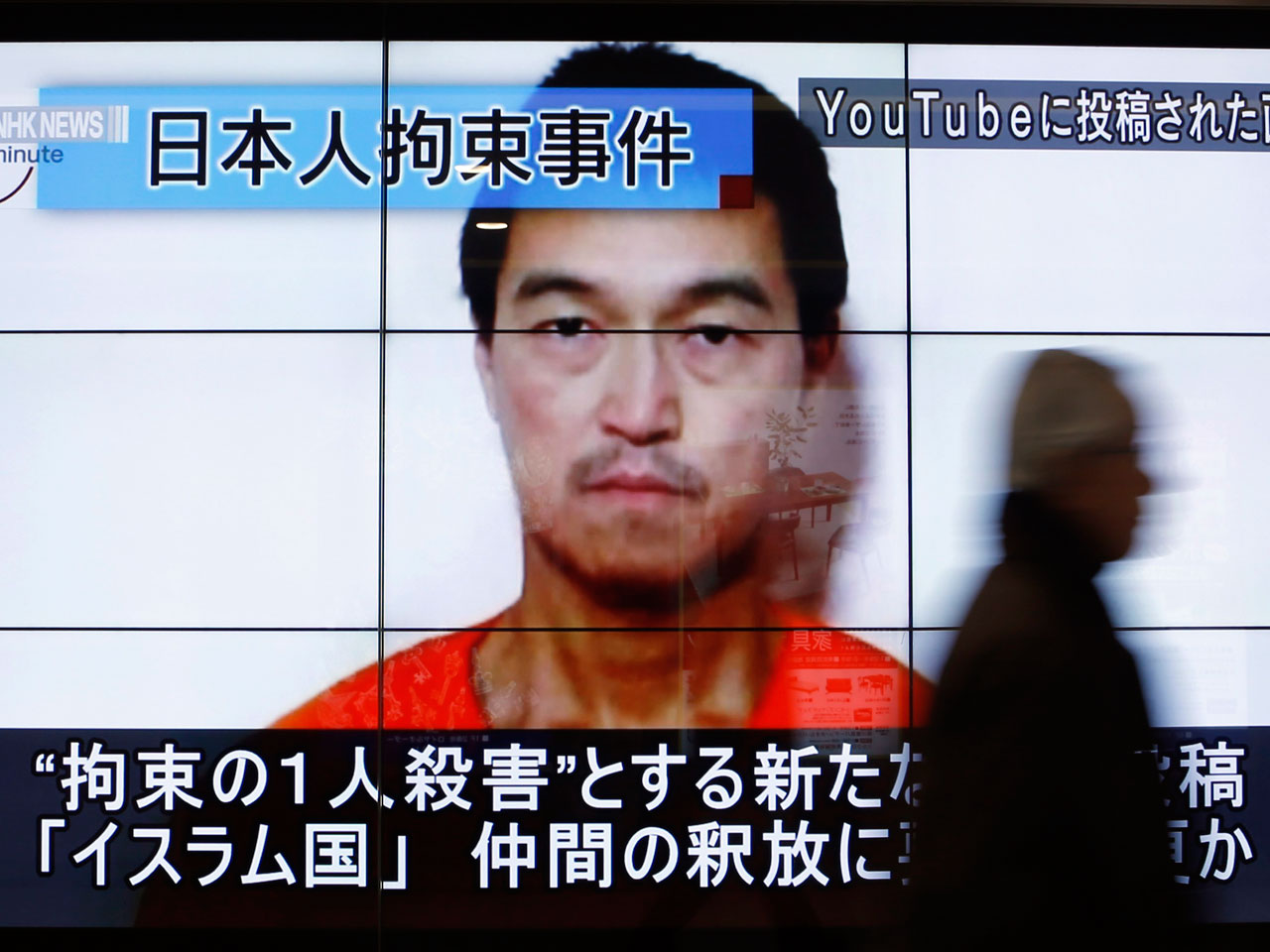 TOKYO - From the prime minister to ordinary people, Japanese were shocked Sunday at a video purportedly showing one of two Japanese hostages of the extremist Islamic State of Iraq and Syria (ISIS) group had been killed.

With attention focused on efforts to save the other hostage, some also criticized Prime Minister Shinzo Abe's drive for a more assertive Japan as responsible for the hostage crisis.

A somber Abe appeared on public broadcaster NHK early Sunday demanding the militants release 47-year-old journalist Kenji Goto unharmed. He said the video was likely authentic, although he added that the government was still reviewing it. He offered condolences to the family and friends of Haruna Yukawa, a 42-year-old adventurer taken hostage in Syria last year.

Abe declined to comment on the message in the video, which demanded a prisoner exchange for Goto. He said only that the government was still working on the situation and reiterated that Japan condemns terrorism.

"I am left speechless," he said. "We strongly and totally criticize such acts."

Yukawa's father, Shoichi, told reporters he hoped "deep in his heart" that the news of his son's killing was not true.

"If I am ever reunited with him, I just want to give him a big hug," he said.

President Barack Obama condemned what he called "the brutal murder" of Yukawa and offered condolences to Abe. Obama's statement didn't say how the U.S. knew Yukawa was dead.

While visiting India, Obama said the United States will stand "shoulder to shoulder" with Japan and called for the immediate release of Goto.

The Associated Press could not verify the contents of the video message, which varied greatly from previous videos released by ISIS, which now holds a third of both Syria and Iraq.

Criticism of Abe has touched on his push for an expanded role for Japan's troops - one that has remained strictly confined to self-defense under the pacifist constitution written after the nation's defeat in World War II.

After his election victory last year set him up to potentially be the longest-serving prime minister since World War II, Abe said changing the country's constitution, despite being unpopular, "is a challenge that we must take."

About 100 protesters, some of them holding placards that read, "I'm Kenji" and "Free Goto," demonstrated late Sunday in front of the prime minister's residence, demanding Abe save Goto.

Demonstrator Kenji Kunitomi, 66, blamed Abe as bringing the hostage crisis on himself.

"This happened when Prime Minister Abe was visiting Israel," he said. "I think there's a side to this, where they may have taken it as a form of provocation, possibly a big one."

While in the Middle East, Abe announced $200 million in humanitarian aid to the nations fighting the militants. ISIS addressed Abe and demanded the same amount of money as ransom for the two hostages.

Reflecting widely held sentiments here, Hori believes Japan, restricted by its constitution, has held a slightly different position from the U.S. and Europe on the Middle East, and had up to now fared better at avoiding Western-style terrorist attacks.

"Japan has its own path of peaceful diplomacy that it should take," Hori said.

Abe reiterated Sunday that the government of Japan will not succumb to terrorism and will continue to cooperate with the international community in the fight against it.

Goto's mother, Junko Ishido, was skeptical about the voice on the video claiming to be her son's.

"I'm petrified," Ishido told NHK. "He has children. I'm praying he will return soon, and that's all I want."

Japanese government spokesman Yoshihide Suga said the audio was still being studied, but there was no reason to deny the authenticity of the video.

Yukawa was captured last summer, and Goto is thought to have been seized in late October after going to Syria to try to rescue Yukawa.

Kent Calder, director of the Reischauer Center for East Asian Studies at SAIS/Johns Hopkins University in Washington, said the "communalistic" and conformist aspects of Japanese society makes events like the hostage crisis particularly emotionally disturbing for its people.

"That trauma is compounded by the fact that I don't think most Japanese saw this coming," he said in an email. "Many will realize out of this that they too are a part of global society, rather than an isolated island nation."

Toshiko Okada, 68, who used to run an English school in a Tokyo suburb, has been stunned by the news and praying for the hostages' lives.

"I feel Abe's misguided shallow acts have triggered this ransom demand," she said. "Maybe he should be attending to problems at home."

The BBC reports that some have even gone so far as to question the role of the hostage's themselves in what is a traumatic event for the country as a whole.

Rupert Wingfield-Hayes, their Tokyo correspondent, reports: "Most Japanese people feel horror at the death of Mr Yukawa and sympathy for the terrifying situation Mr Goto is now in. But there is also irritation that Mr Yukawa, and to a lesser extent Mr Goto, have dragged Japan in to this almost impossible situation. In previous cases where Japanese hostages have been released from captivity, they have faced considerable hostility on returning home."