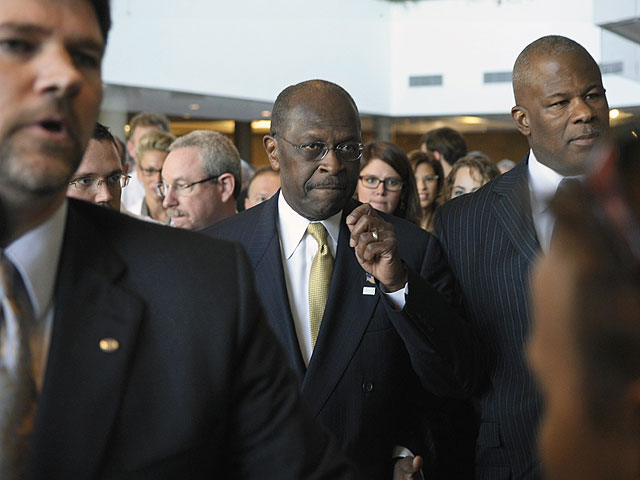 As Herman Cain continues to fight off accusations of sexual misconduct, some women on the right are beginning to question how he perceives women - and a new CBS News poll suggests that Cain is losing support among Republican women voters.

The former CEO and lobbyist, who has never held elected office, has been dogged recently by a series of accusations that he made unwanted sexual advances toward women while he was head of the National Restaurant Association in the 1990s.

The charges were first enearthed on October 31, when Politico reported that two unnamed women, both then employees at the NRA, filed sexual harassment complaints against Cain during his tenure. Since then, several additional accusations of impropriety have emerged, and two women have come out publicly against the candidate - including Karen Kraushaar, one of the women who filed a complaint in the 1990s. Another woman, Sharon Bialek, publicly accused the candidateof putting his hand up her skirt and attempting to push her head toward his crotch after a dinner meeting predicated on his giving her career advice.

In the midst of the scandal, during Wednesday's CNBC Republican presidential debate, Cain again raised eyebrows by referring to House Minority Leader Nancy Pelosi as "Princess Nancy" - a nickname many decreed diminutive and sexist.

Cain has flatly deniedthe charges of sexual misconduct, and he later apologized for the "Princess Nancy" remark.

But a CBS News pollreleased Friday suggests that some women aren't satisfied with Cain's recent behavior: his support among Republican women has dropped 13 percent in the two weeks since the allegations against him surfaced.

In the survey, which was conducted by telephone from November 6-10, 15 percent of conservative women expressed support for Cain, down from 28 percent on October 25.

The candidate has also lost ground with conservatives, dropping from 30 percent to 23 percent support. And there has been some movement among Tea Party supporters as well; their support for Cain has declined from 32 percent to 19 percent.

Overall, Cain, with 18 percent support, still edged out Romney and Gingrich for the lead. Romney and Gingrich both earned 15 percent support, and seventeen percent of those surveyed said they still didn't know who they would vote for. Six in 10 Republican primary voters said the charges of sexual harassment against Cain will not affect how they vote, while 30 percent said the charges make them less likely to support him. Just 23 percent of men said they would be less likely to vote for Cain because of the harassment allegations.

Can Cain stop the bleeding?

So far, Nikpour argues that Cain appears to have the qualities of what she calls a "Teflon Brand"; he has been able to sustain charges of sexual misconduct without taking a major popularity hit.

But, she told Hotsheet, his future "depends on if more people come out, and it depends on how much further these allegations go."

Even now, Nikpour argued that the allegations are "not sitting well" with a lot of women.

"A lot of women, when they hear these allegations, they think, where there's smoke there's fire. I think that they very well may look at another candidate," she said. "When [the accusers] first came out, it wasn't one person - it was almost like the Tiger Woods effect, when you found one and then two and then three and then four. The fact that there's so many [women], it's disturbing."

"I don't like it," Nikpour said. But, she added, "he's innocent until proven guilty."

What would a Herman Cain White House look like?

Cain's response to the allegations, as well as some recent comments, have also led some Republican women to question the extent to which Cain might respect women as professional equals.

According to Republican strategist Karen Hanretty, who has served as Communications Director for the National Republican Congressional Committee (NRCC) and worked on Arnold Schwarzenegger's campaign in 2003, Cain's recent behavior raises questions about his history of hiring and working with women in leadership positions.

"For every candidate, it is expected that these men, whether Republican or Democrat, are going to have women in strong positions in leadership," she said in an interview with Hotsheet.

Hanretty pointed to the candidate's "Princess Pelosi" comment as evidence that his credentials in that department might be questionable.

"Let's just pretend Herman Cain won the general election against Obama. How is he going to sit down and expect Nancy Pelosi to work with him when he is mocking her based on her gender?" she wondered. "You don't mock people based on their gender - and that's what he was doing. It was very belittling. You can disagree with [Pelosi] - and we all do - but there's no point mocking her title and the position that she's achieved."

Nikpour concurred that the remark demonstrated a "lack of respect for women in general."

"I think that that was a surprising choice of words," she said.

"Would Herman Cain take economic advice from a woman as qualified as a man in that role?" she wondered. "Those are the issues that I think all of this scandal raises. And quite frankly I think no one is asking that question."