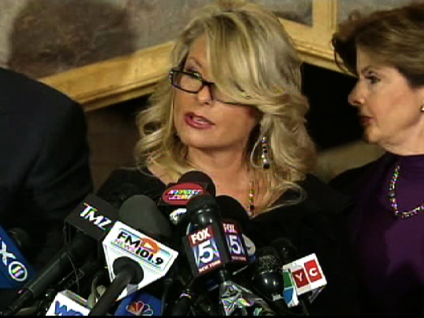 A Chicago woman accused Herman Cain on Monday of trying to get sexual favors more than a decade ago in exchange for his help finding her a new job just after she had lost her post at an arm of the restaurant association he was then running.

The woman, Sharon Bialek, is the fourth woman who has accused Cain of sexually inappropriate behavior in the late 1990s and the first to go public with her charges. She outlined her story at a high-profile New York City press conference at the Friars Club.

"I want you, Mr. Cain, to come clean," she said with her attorney, Gloria Allred, at her side. Allred is known for her media savvy and for representing women who have had legal issues with the rich and powerful.

Bialek said Cain put his hand under her skirt and pushed her head toward his crotch after a dinner together in 1997 after she asked to meet him to discuss ways he might be able to help her find employment. She said he backed away after she asked him to stop. Her boyfriend at the time on Monday issued a statement released by Allred confirming that she told him about the incident at the time. Allred did not release the boyfriend's name.

Bialek does not plan to sell her story or file a lawsuit against the Republican candidate for the White House.

"Just admit what you did. Admit you were inappropriate to people. And then move forward. America is in a horrible turmoil as we all know. We need a leader who can set an example which exemplifies the standards of a good person and moral character. Mr. Cain, I implore you, make this right. So that you and the country can move forward and focus on the real issues at hand," Bialek said.

She said she was let go from the National Restaurant Association's Educational Foundation in the summer of 1997 and asked to meet him for coffee a month or so later in Washington, to ask for his assistance with her job search.

She said she booked herself a room at a hotel two blocks from the White House and when she checked in, it was upgraded to a suite by Cain. They went to dinner at an Italian restaurant and after dinner Cain made unwanted advances toward Bialek in the car.

When she asked what he was doing, she said he responded by rhetorically asking her: "You want a job, right?"

She said Cain stopped when she made it clear she was not interested.

Bialek said she saw Cain for the first time since the incident last month at a Chicago Tea Party event and asked the candidate if he remembered her.

"I guess he wanted to see if he was going to be man enough to own up to what he had done some 14 years ago. He acknowledged that he remembered me from the foundation but he kind of looked uncomfortable and he said nothing as he was whisked away for his speech by his handlers," she said.

Three other women have reportedly accused Cain of inappropriate behavior while he was running the National Restaurant Association, but none of them has made public charges against him.

Allred last year represented Nicky Diaz Santillan, the housekeeper California gubernatorial candidate Meg Whitman fired because of her immigration status. She also represented one of the women who had an affair with golf legend Tiger Woods.

The latest accusations are likely to put more pressure on Cain to explain what happened with the women who worked for him at the restaurant group. Cain has denied any harassment occurred.

Before the press conference had concluded, Cain's campaign issued a statement calling the allegations "false."

"Activist celebrity lawyer Gloria Allred is bringing forth more false accusations against the character of Republican front-runner Herman Cain," the campaign said in a prepared statement.

"All allegations of harassment against Mr. Cain are completely false. Mr. Cain has never harassed anyone," the statement said.

Cain himself has sought to deflect questions on the matter, telling reporters on Saturday after a one-on-one debate in Texas with former House Speaker Newt Gingrich that "we are getting back on message, end of story."

"Far as we're concerned, these allegations aren't going anywhere," Cain said Sunday on Fox News, "I mean people might make up some more stuff. We are in it to win it."

Politico first reported on Oct. 30 at least two female employees complained of sexually suggestive behavior by Cain while he was head of the restaurant association in the 1990s. The Associated Press last week reported that a third woman had complained about Cain's behavior.

None of the other three has made the charges public and Sharon Bialek is the first woman to come before television cameras to make charges against the former chief executive of Godfather's pizza.

And Bialek said she did not want to make her case public, but only did so after hearing about the other women.

"Now I am coming forward to give a face, and a voice, to those women who cannot or for whatever reasons do not wish to come forward and on behalf of all women who are sexually harassed in the workplace but do not come out of fear of retaliation or of public humiliation," said Bialek, who worked for CBS radio station WCKG from 2006-7.

A poll released Sunday showed that Cain's poll numbers dropped for the first time since the accusations were made public a week ago, though it should be noted that the poll was conducted online. Online polls are typically much less reliable than traditional telephone polls.

Exhaustive media coverage of Cain's tenure as head of the restaurant association has boosted Cain's name recognition and helped him raise campaign cash from small donors.

His campaign said he raised $1.6 million in the first five days after the scandal broke.