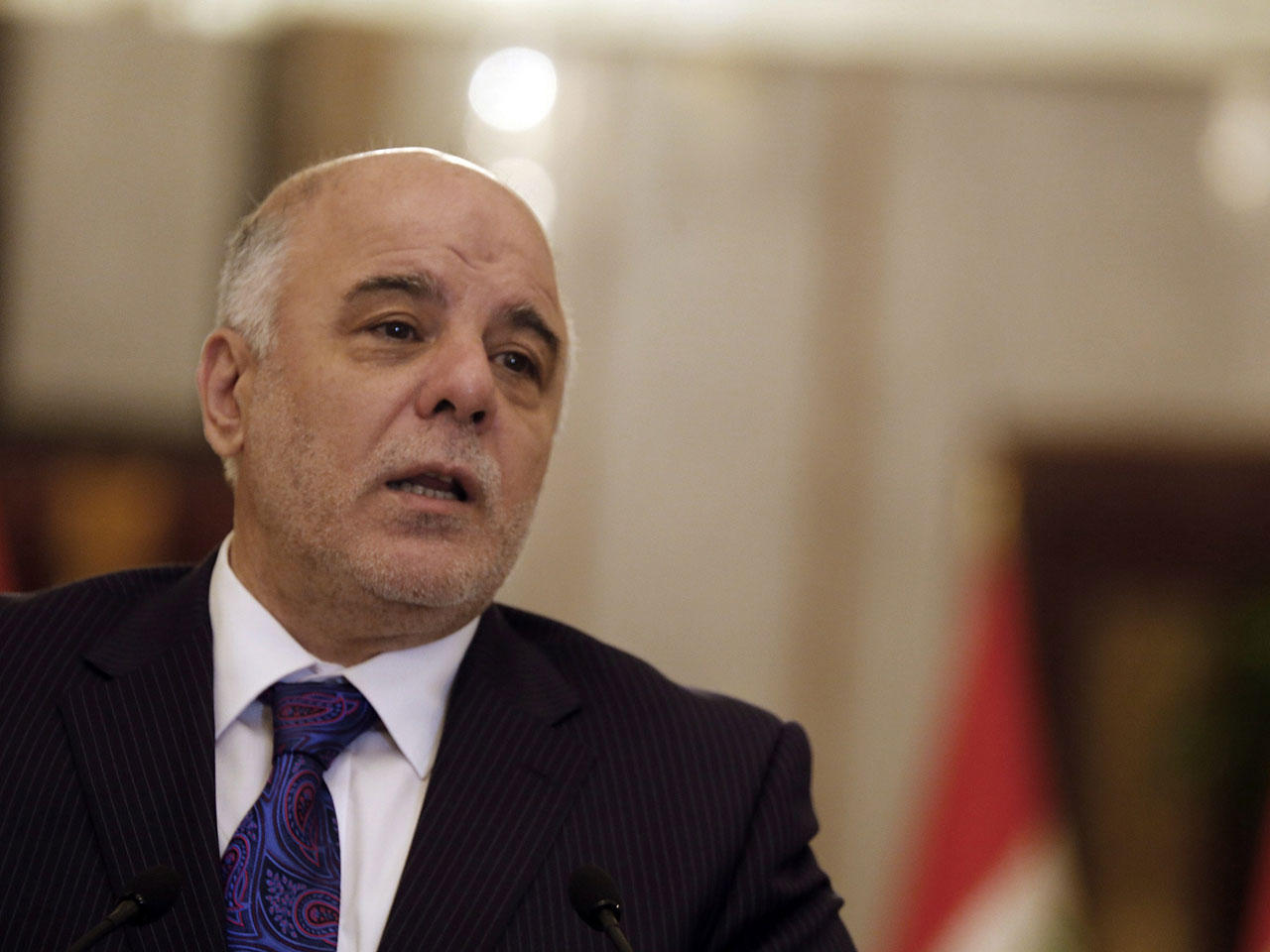 BAGHDAD - Iraq's prime minister strongly rejected the idea of the U.S. or other nations sending ground forces to his country to help fight the Islamic State of Iraq and Syria, saying Wednesday that foreign troops are "out of the question."

In his first interview with foreign media since taking office on Sept. 8, Haider al-Abadi told The Associated Press that the U.S. aerial campaign currently targeting the militants who have overrun much of northern and western Iraq has helped efforts to roll back the Sunni extremists. He also urged the international community to go after the group in neighboring Syria, saying the battle will prove endless unless the militants are wiped out there as well.

The U.S. is trying to line up an international coalition to defeat the Islamic State of Iraq and Syria (ISIS, also known as ISIL), which has carved out a proto-state spanning the Syria-Iraq border. President Barack Obama has outlined a plan that includes a broader military campaign in Iraq, increased support and training for Syrian rebel groups, and expanded airstrikes against the militants in Syria.

Al-Abadi, a Shiite lawmaker who faces the enormous task of trying to hold Iraq together as a vast array of forces threaten to rip it apart, welcomed the emerging international effort, but stressed that he sees no need for other nations to send troops to help fight ISIS.

"Not only is it not necessary," he said, "We don't want them. We won't allow them. Full stop."

Al-Abadi's comments provided a sharp rebuttal to remarks a day earlier by the chairman of the U.S. Joint Chiefs of Staff, Gen. Martin Dempsey, who told the Senate Armed Services Committee that American ground troops may be needed to battle ISIS forces in the Middle East if Obama's current strategy fails.

He said that the Iraqi military will choose and approve targets, and that the U.S. will not take action without consulting with Baghdad first. Failure to do so, he warned, risks causing civilian casualties like in Pakistan and Yemen, where the U.S. has conducted drone strikes for years.

Al-Abadi also urged the international community to expand its campaign against the extremists to neighboring Syria, noting that militants coming under pressure in Iraq are retreating back into Syria, which does not solve the problem.

"The fight will go on unless ISIL is hit in Syria," he said, using an acronym for the group. "This is the responsibility of the international community - on top of them the United States government - to do something about ISIL in Syria."

ISIS was established in Iraq but spread in early 2013 to Syria, where it grew exponentially in the chaos of the country's civil war. Following its success in Syria, the extremist group's fighters - including many Iraqi nationals - rampaged across northern and western Iraq in June, seizing control of a huge swath of land and sending tremors across the Middle East.

The group now rules over territory stretching from northern Syria to the outskirts of Baghdad, where it imposes its strict interpretation of Islamic law.

The U.S. has ruled out cooperating with Syrian President Bashar Assad in the Obama administration's expanded campaign against ISIS. The White House has long called Assad's rule illegitimate and demanded he step aside.

Al-Abadi, however, said that Iraq doesn't have the luxury of testy relations with Damascus, and instead pushed for some sort of coordination.

"We cannot afford to fight our neighbor, even if we disagree on many things," al-Abadi said. "We don't want to enter into problems with them. For us sovereignty of Syria is very important."

The two countries, both of which are allies of Iran, appear to already be coordinating on some level, and Iraq's national security adviser met Tuesday with Assad in the Syrian capital, where the two agreed to strengthen cooperation in fighting "terrorism," according to Syria's state news agency.

The CIA estimates ISIS now has access to somewhere between 20,000 and 31,000 fighters in Iraq and Syria. A senior Iraqi intelligence official told The Associated Press that more than 27,600 ISIS fighters are believed to be operating in Iraq alone, about 2,600 of whom are foreigners. The official spoke anonymously as he is not authorized to brief the media.

Iraqi and Kurdish security forces, backed by U.S. airstrikes, were able to retake the strategic Mosul Dam last month, and several small towns have been retaken since the American aerial campaign began. French reconnaissance planes equipped with cameras able to collect both day and night images from low and high altitude also left from al-Dhafra air base in the United Arab Emirates on Monday as part of France's commitment to provide aerial support to the Iraqi government.

Iranian-backed militias have provided much of the muscle for Iraq's government as the national military has struggled. The Shiite militias played a key role recently on the ground in the Iraqi town of Amirli, where they were crucial in ending a siege by Islamic State fighters.

The U.S. hopes to pull together a broad coalition to help defeat the extremist group, but has ruled out cooperating with neighboring Iran or Syria, both of which also view ISIS as a threat. Both countries were excluded from a conference this week in Paris that brought the U.S., France and other allies together to discuss how to address the militant threat.

Al-Abadi said that excluding Damascus and Tehran was counterproductive.

"I actually find it puzzling that we hold a conference in Paris to help Iraq and to fight terrorism and here we are, it's the biggest neighbor of Iraq - Iran - is excluded," he said. "That puts me as a prime minister in Iraq in a very difficult position."

Al-Abadi added that Iraq is caught in the middle of "a disagreement between the international allies - or this international coalition - and Iran on the Iraqi land. For me, that is catastrophic."