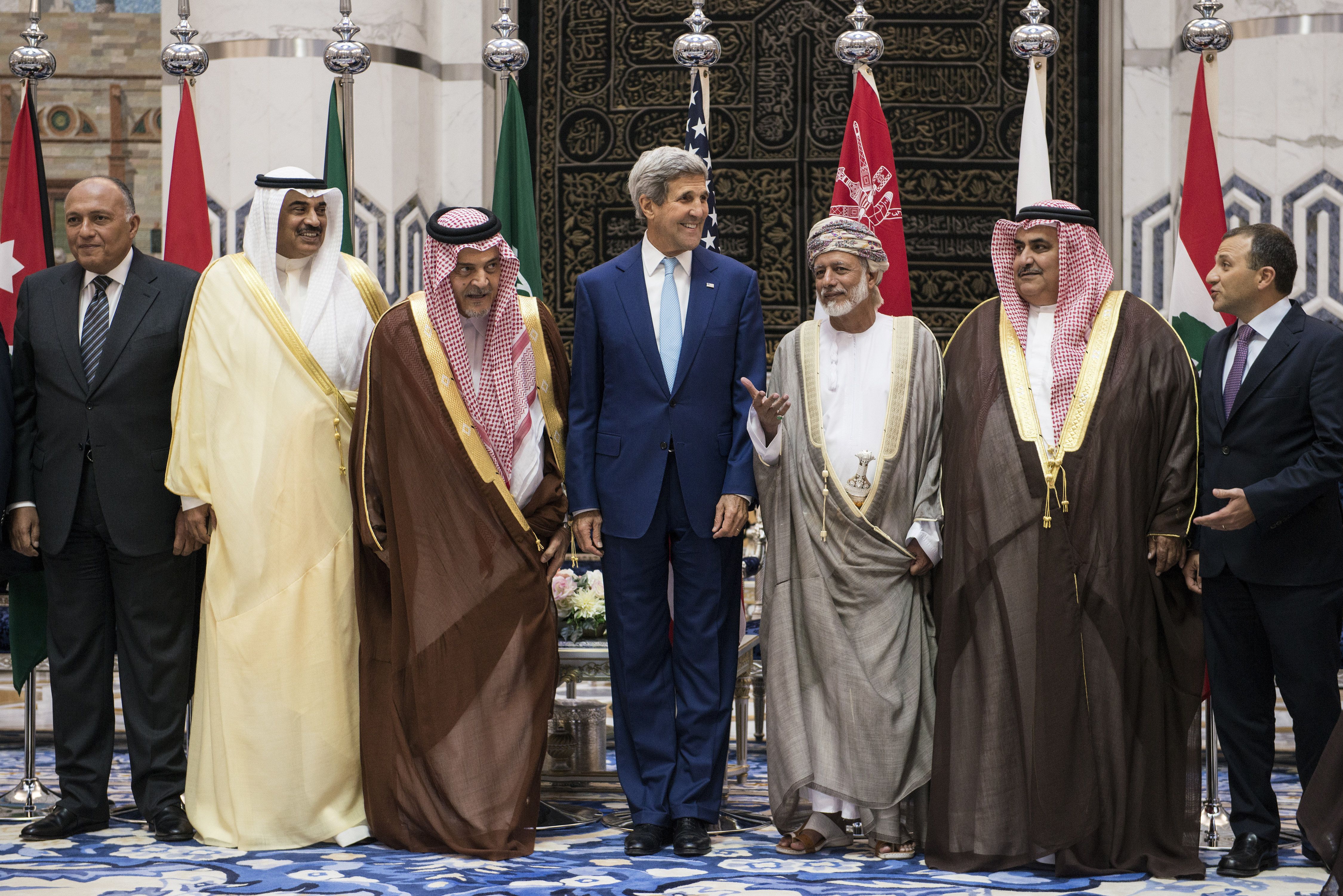 PARIS -- Newly outraged by the beheading of yet another Western hostage, diplomats from around the world are in Paris pressing for a coherent global strategy to combat extremists from the Islamic State of Iraq and Syria (ISIS) -- minus two of the main players and without any ground troops -- in a conflict that threatens to spill beyond the Mideast.

U.S. Secretary of State John Kerry has been pressuring allies ahead of a conference Monday to show a united front, especially from majority-Muslim nations, saying nearly 40 countries agreed to contribute to a worldwide fight to defeat the militants before they gain more territory in Iraq and Syria.

The White House said Sunday it would find allies willing to send combat forces -- something the United States has ruled out -- but that it was too early to identify them. The U.S. has so far been alone in carrying out airstrikes.

Several Arab countries offered to conduct airstrikes against ISIS, according to a State Department official traveling with Kerry who briefed reporters on condition of anonymity to discuss diplomat developments during his trip.

A second official gave some examples of what the U.S. would consider a military contribution: providing arms, any kind of training activity and airstrikes.

And as CBS News' Elizabeth Palmer reports, the meeting in Paris did bear fruit -- limited though it may have been; France requested and received permission from Baghdad to begin reconnaissance flights over ISIS-held territory in Iraq. While not the airstrikes Washington is after, they could be a precursor to French military action.

At the conclusion of the meeting in Paris, the organizers issued a joint statement saying 26 countries, as well as the European Union, United Nations and Arab League had pledged to fight ISIS by any means necessary, including military action -- but only in Iraq, and there was no further detail in the statement about what individual nations might have agreed to.

Muslim-majority countries are considered vital to any operation, although there have only been vague offers of help previously. Iran was struck off the invitation list, and Western officials have made clear they consider Syria's government part of the problem.

"Ultimately, this is a fight within Islam, within Sunni Islam," White House chief of staff Denis McDonough told Fox News on Sunday.

"That's why we know that ultimately to defeat and ultimately destroy ISIL, something that is not only in our interest but in the interest of the countries in the region, they are going to need to take the fight to it," he said, using an alternate acronym for the group.

"We'll build, we'll lead, we'll undergird, and we'll strengthen that coalition. But ultimately, they're going to help us beat them on the ground," McDonough said.

The reluctance of the U.S. and its major Sunni allies in the region to engage the two nations most eager to combat ISIS is one of the bigger underlying problems, explains CBS News foreign affairs analyst Pamela Falk.

"The only nations which have been out front to offer boots on the ground are Iran and Syria," said Falk, "and the U.S. doesn't want it."

Speaking Sunday on "Face the Nation," Kerry insisted the objective was not to secure guarantees of boots on the ground -- from any nation.

"There are some who have offered to do so, but we are not looking for that, at this moment anyway," Kerry said.

But securing military commitments of other kinds -- to train and equip "moderate" Syrian rebels, carry out airstrikes, and provide intelligence -- will be most critical as the Obama administration maintains its promise to keep American combat forces out of the fight.

White House Chief of staff Denis McDonough said Sunday on "Face the Nation" that it will be up to regional partners and Syrian fighters to confront ISIS at ground level.

"We're going to provide our unique capabilities and airstrikes and intelligence and training and then it will be up to the Syrians on that side of the border to finish the job," said McDonough.

One of those allies could be Jordan, according to Republican Representative Michael McCaul, who said on "Face the Nation" he had "met with the Prince of Jordan just two days ago, who said he is ready today to put his troops into Syria to fight ISIS."

But the Paris conference, officially dedicated to peace and stability in Iraq, avoids mention of Syria, the power base of the militant organization gaining territory in both countries by the week. And the U.S. opposed France's attempt to invite Iran, which shares an 870-mile border with Iraq. The gathering itself will be brief, a matter of a few hours between its start and a planned joint statement.

In an exclusive interview on Sunday with The Associated Press in Paris, Iraq's President Fouad Massoum -- a Kurd, whose role in the government is largely ceremonial -- expressed regret that Iran was not attending the conference.

Massoum noted "sensitivities between some countries and Iran."

He also seemed not to welcome the possible participation Egypt, the United Arab Emirates and Saudi Arabia in airstrikes in Iraqi territory.

Iranian Supreme leader Ayatollah Ali Khamenei, speaking on Iranian state television, said his government privately refused American requests for cooperation against ISIS, warning that another U.S. incursion would result "in the same problems they faced in Iraq in the past 10 years."

But Kerry said the U.S. and Iran have discussed whether there was any way they could work together against ISIS.

A French intelligence official, speaking on condition of anonymity, last week told The Associated Press that "it would please a certain number of countries for Iran to step in to establish order" in Syria. He said that was the view of some Western powers.

After the conference ended, Kerry met privately with Massoum at the Iraqi Embassy in Paris, telling him that the drive for an inclusive Iraq government had been key to Monday's pledges.

"So I hope you feel that the push and the risk was worth it," Kerry said.

"We are beginning to feel it," Massoum said through a translator.

Speaking in his first interview since becoming Iraqi prime minister, Haider al-Abadi told state-run al-Iraqiyya in comments aired Sunday that he had given approvals to France to use Iraqi airspace and said all such authorizations would have to come from Baghdad.

The killing of David Haines, a British aid worker held hostage by the militants, added urgency to the calls for a coherent strategy against the brutal and well-organized group, which is a magnet for Muslim extremists from all over the world and rakes in more than $3 million a day from oil smuggling, human trafficking, theft and extortion, according to U.S. intelligence officials and private experts.

British Prime Minister David Cameron said his country would continue offering logistical help to U.S. forces and that counterterrorism efforts will increase, describing ISIS as a "massive" security threat that cannot be ignored.

"They are not Muslims, they are monsters," Cameron said.

Haines was the third Westerner to be killed by the extremists, after two American journalists. British officials also released the name of a second U.K. hostage being held by the group and threatened with death, identifying him as Alan Henning.

Following successes in Syria, fighters with ISIS -- among them many Iraqis -- took on the Iraqi military in Sunni-majority Anbar province, capitalizing on long-standing grievances against the Shiite-led government in Baghdad.

When the militants arrived in Mosul, Iraq's second-largest city, the U.S.-trained military crumbled almost instantly. Commanders disappeared. Pleas for more ammunition went unanswered. Troops ran from post to post, only to find them already taken by gunmen. In some cases, they stripped off their uniforms.

The militants seized tanks, missile launchers and ammunition that allowed their lightning advance across northern Iraq.

The CIA estimates the Sunni militant group has access to between 20,000 and 31,000 fighters in Iraq and Syria. A senior Iraqi intelligence official told The Associated Press that more than 27,600 ISIS fighters are believed to be operating in Iraq alone, including about 2,600 foreigners. He spoke anonymously as he is not entitled to brief the media.

McDonough said Iraq's newly inclusive Iraqi government allowed the U.S. and other countries to step up their role.

Australian Prime Minister Tony Abbott said he was preparing to contribute up to 10 military aircraft and 600 personnel to be deployed to the United Arab Emirates. A statement from his office said special operations personnel who could assist Iraq's security forces were being prepared also, but combat troops were not being deployed. Australia was not on the list of countries attending the Paris conference released Sunday by the French presidency.

Germany on Friday banned all activity on behalf of the Islamic State group, including the distribution of propaganda and the display of its symbols, and is supplying Kurdish forces fighting the extremists in Iraq with assault rifles, anti-tank weapons and armored vehicles. But Germany has ruled out airstrikes and ground troops.

French President Francois Hollande and his Iraqi counterpart will co-chair the conference of 26 countries, plus the European Union, United Nations, and the Arab League. Hollande said the goals are to provide political support to the Iraqi government, coordinate humanitarian aid, and fight ISIS.

The conference agenda deliberately focused on Iraq for fear that discussions on Syria could distract from efforts to build a coalition. France had initially wanted to invite Iran, but U.S. and Saudi officials objected.

"Political feuds and differences between Iran from one side and the West and Saudi Arabia should be set aside," said Hadi Jalo, a Baghdad-based political analyst. "Iran should be invited because whether we like or not, Iran is a key player in the region."

Unlike the U.S., France is stopping short of possible action in Syria although the Paris government has not ruled out airstrikes in Iraq. The French fear that airstrikes on extremists within Syria could strengthen President Bashar Assad's hand and raise international legal problems.