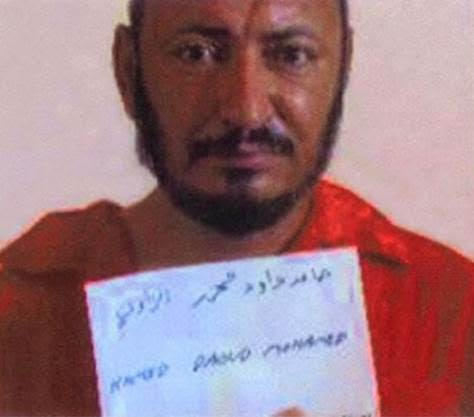 BAGHDAD -- A Baghdad court has convicted the sister of the former leader of al Qaeda in Iraq who was killed in 2010 and sentenced her to death on terrorism charges, a spokesman said Thursday. The spokesman of Iraq's Supreme Judicial Council, Abdul-Sattar Bayrkdar, said in a statement that Abu Omar al-Baghdadi's sister was found guilty of "offering logistic support and help to (the militants) in carrying out criminal acts."

The woman, whose name was not released, was also found guilty of "distributing money" among the militants in Mosul. He didn't give more details on the charges or what years she cooperated with al Qaeda in Iraq.

Bayrkdar said the woman's husband was earlier also sentenced to death as a member of the al Qaeda leadership.

Al-Baghdadi was killed in April 2010, along with Abu Ayyub al-Masri, another prominent al Qaeda leader in Iraq, in a U.S.-Iraqi joint operation.

Thursday's statement by Bayrkdar initially said the convicted woman was the sister of Abu Bakr al-Baghdadi, the reclusive leader of the Islamic State of Iraq and Syria (ISIS), but the spokesman later issued a correction, saying she is Abu Omar al-Baghdadi's sister.

Al Qaeda in Iraq was the parent group from which ISIS emerged.

In mid-2014, ISIS controlled vast areas in northern and western Iraq, including Iraq's second-largest city of Mosul, which was under the militants' rule for more than three years.

Iraq declared victory over ISIS last December, after driving the militants from northern and central Iraq. Hundreds of women, including foreigners, were arrested in the sweep. Since then, Iraq's Central Criminal Court has issued number of sentences against ISIS women, ranging from years in prison to death by hanging.

ISIS leader Abu Bakr al-Baghdadi's whereabouts remain unknown. Rumors have surfaced on several occasions of his death and injuries in airstrikes and fighting in both Iraq and Syria, territories where ISIS had declared an Islamic "caliphate," though there was never anything to back them up.

He is believed to be in his mid-40s, and was seen in public only once when he declared himself the leader of ISIS from a historic mosque in Mosul, just a few weeks after ISIS captured the city in the summer of 2014, along with entire swaths of northern and western Iraq.

Since then, he has only released audio messages to his followers from time to time, urging them to keep on fighting.