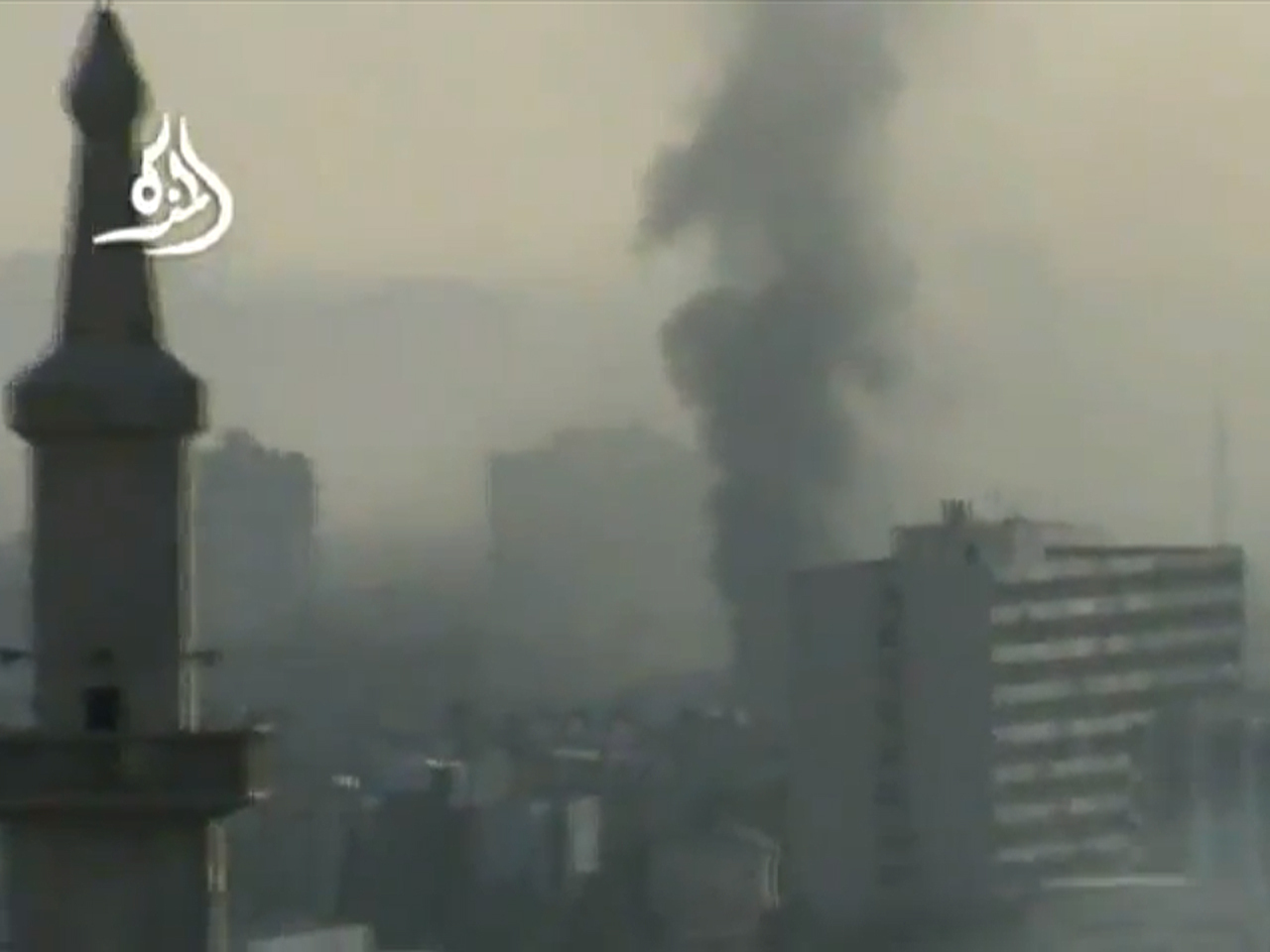 The suicide bombings and subsequent gun battles in the Syrian capital killed at least five people, including a reporter for Iranian TV. The carefully orchestrated attacks highlighted the regime's growing vulnerability, even as the 18-month battle to bring down Assad is locked in a stalemate.

The explosions targeting the Syrian military compound went off about 10 minutes apart, around 7 a.m., with the first blast possibly meant to create a diversion to enable the second attacker to get into the compound.

Security camera footage aired by Syrian state TV showed a white van driving on a busy thoroughfare outside the military compound, then veering to the right and exploding. The footage showed a second blast going off inside the complex, with flames rising up behind trees.

After the second explosion, rebel fighters and regime forces exchanged fire for more than three hours, including inside the military compound, said Rami Abdul-Rahman of the Britain-based Syrian Observatory for Human Rights, an activist group. The fighting spilled over into nearby Omayyad Square, with regime troops — some wildly firing in the air — chasing after rebel gunmen, witnesses said.

Syrian state TV reported that four army guards were killed and 14 people were wounded, including civilians and military personnel.

The Iranian English language Press TV said one of its Syrian correspondents, 33-year-old Maya Nasser, was killed by a rebel sniper following the blast. The station replayed Nasser's last report, in which he was on the phone from Damascus during a live broadcast, when the line suddenly went silent. The Damascus bureau chief for Press TV, Hosein Mortada, was wounded in the clashes.

Abdul-Rahman said the regime was underreporting casualties in an attempt to play down the severity of the attacks.

Fear spread among residents of the nearby Malki area, an upscale district that has largely been sheltered from the battles that usually rage in the city's impoverished belt of suburbs.

"It is obvious that there are no more safe areas in Syria," said Hala, a 28-year-old resident who only gave her first name for fear of repercussions. "We are all under fire."

Syria's unrest began in March 2011 when protests calling for political change met a violent government crackdown. Many in the opposition have since taken up arms as the conflict morphed into a civil war that activists say has killed nearly 30,000 people. Over the past few months, the rebels have increasingly targeted security sites and symbols of regime power in a bid to turn the tide in the fighting.

On July 18, rebels penetrated the heart of Syria's power elite, detonating a bomb inside a high-level crisis meeting in Damascus that killed three top regime officials, including Assad's brother-in-law and the defense minister. Other large blasts have targeted the headquarters of security agencies in the capital, killing scores of people this year.

And on Tuesday, several bombs went off inside a Damascus school that activists said was being used by regime forces as a security headquarters. Several people were wounded.

Syria's conflict was the focus of attention as world leaders gathered at the U.N. General Assembly's annual meeting in New York this week.

Making his debut on the global stage at the United Nations, Egypt's new President Mohammed Morsi said he will not rest until Syria's civil war is brought to an end. He called it the "tragedy of the age" and one that "we all must end."

Morsi has launched an "Islamic Quartet" of regional powers to seek an end to the violence, but he has not offered a specific plan of action.

U.N. Secretary-General Ban Ki-moon demanded international action to stop the war in Syria, telling a somber gathering of world leaders Tuesday that the 18-month conflict had become "a regional calamity with global ramifications."

Ban, declaring that the situation in Syria is getting worse every day, called the conflict a serious and growing threat to international peace and security that requires attention from the deeply divided U.N. Security Council.

That appears highly unlikely, however, at least in the near future.

Russia and China have vetoed three Western-backed resolutions aimed at pressuring Assad to end the violence and enter negotiations on a political transition, leaving the U.N.'s most powerful body paralyzed in what some diplomats say is the worst crisis since the U.S.-Soviet standoff during the Cold War.

In sharp contrast to the U.N. chief, President Obama pledged U.S. support for Syrians trying to oust Assad - "a dictator who massacres his own people," he said.