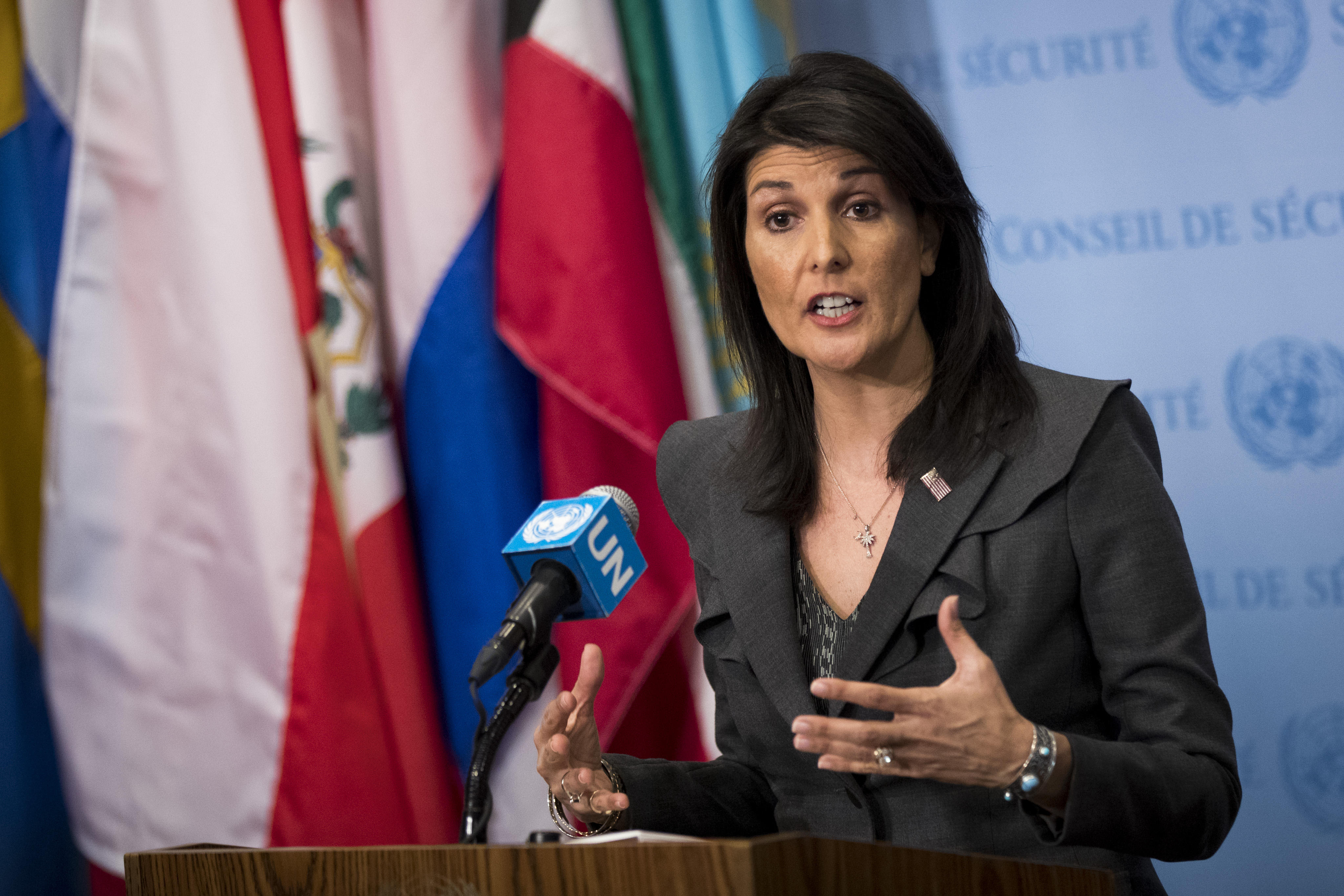 UNITED NATIONS -- The United Nations Security Council was to hold an emergency meeting Friday afternoon on what U.S. Ambassador Nikki Haley has described as the "troubling and dangerous situation in Iran."

At least 450 people have been arrested and 21 killed in anti-government protests that swept quickly across the Islamic Republic late last week. The demonstrations began Thursday with a single protest in the eastern Iranian city of Mashhad over economic hardship, and the rate at which they spread took both the regime in Tehran and the U.S. by surprise.

But as the Trump administration sought to use the protests to increase pressure on the Iranian regime, issuing public support for the demonstrators and calling for a United Nations response, the Iranians appeared to have largely quashed the uprisings with an overwhelming and aggressive security response.

While there were still scattered anti-government protests reported on Thursday evening, they had been largely replaced by pro-government counter demonstrations, with thousands of people hitting the streets of Tehran and other major cities in support of the Islamic cleric-led regime.

On Thursday, Interior Minister Abdolreza Rahmani Fazli said that, at most, 42,000 people took part in anti-government protests. He claimed they only went on as long as they did because of the "leniency, restrain, tolerance and interaction" of the government security forces. He did not elaborate. More large-scale pro-government demonstrations were planned for after Friday prayers across Iran.

"We must not be silent. The people of Iran are crying out for freedom," Haley said earlier this week as the protests gained steam.

"Tomorrow the U.N. Security Council will discuss the troubling and dangerous situation in Iran," Haley said in a statement issued Thursday evening, adding that it was "a matter of fundamental human rights for the Iranian people, but it is also a matter of international peace and security."

Alma Konurbayeva, press officer for Kazakhstan, the Security Council president for January, confirmed to CBS News' Pamela Falk that Friday afternoon's meeting -- called for by Haley -- was on the agenda.

Several countries on the Security Council have blocked or attempted to prevent meetings focused on internal or domestic affairs of U.N. member states in the recent past. Falk reports that if Russia or any of the 14 other Council members object to the meeting, it will go to a vote about whether to go ahead with it.

In order for the Council meeting that Haley wants to take place, she would need a minimum of nine votes from Council members. It was unclear Friday morning whether Haley has that level of support.

Swedish Foreign Minister Margot Wallstrom came under fire this week after she spoke with the national media  about Sweden's "great concern and dismay" about the events in Iran, but expressed skepticism about the need for a meeting at the U.N.

Haley disagrees; "It will be telling if any country tries to deny the Security Council from even having this discussion, just as the Iranian regime tries to deny its own people the ability to have their voices heard."

The most overt resistance to holding a meeting at the U.N. has come from Russia.

"We see no role for the United Nations Security Council in this issue," Deputy Foreign Minister Sergei Ryabkov said, adding that a meeting on the civil disobedience in Iran would be "harmful and destructive."

"The Iranian dictatorship is trying to do what it always does, which is to say that the protests were designed by enemies. We all know that is complete nonsense," Haley told reporters this week.

The White House, meanwhile, continues to tighten the economic screws on Iran. On Thursday, the Department of the Treasury's Office of Foreign Assets Control (OFAC) sanctioned five Iran-based entities related to a key elements of Iran's ballistic missile program, which U.S. Treasury Secretary Steven Mnuchin said the Iranian regime "prioritizes over the economic well-being of the Iranian people."

Iran is also weighing in to U.N. Security Council members. A letter, obtained by CBS News, written by Iranian Ambassador Gholamali Khoshroo to U.N. Secretary General Antonio Guterres for circulation as an official document to the Council said, "In the past several days, the U.S. administration, led by the U.S. President, has stepped up its acts of intervention in a grotesque way in Iran's internal affairs under the pretext of providing support for sporadic protests… Iran's domestic affairs have nothing to do with the United Nations Security Council's role."

Given the Russian opposition to a Security Council meeting on Iran, some diplomats and experts believe the meeting proposal itself could be a win-win for the U.S.

If the U.S. does not garner the votes to hold the meeting, it will bolster the U.S. argument that the U.N. fails to speak out on human rights. If the meeting does take place, the Trump administration will be able to point out that money from the lifting of sanctions under the 2015 nuclear deal has not made its way to the Iranian people -- thus creating the atmosphere for the protests that began over the country's economic malaise.