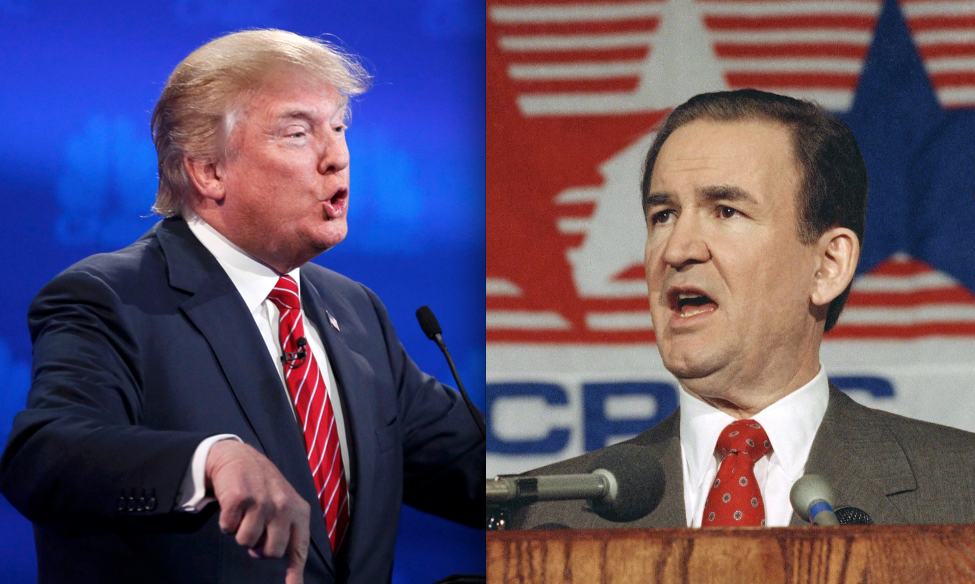 At first glance, for Republicans, the 2016 election does not look much like the 1992 election.

For one, the GOP had an incumbent, George H.W. Bush, in the White House in 1992. Today, the presidency is held by Democrat Barack Obama. In 1992, despite some grumbling from the base, Bush was able to serve as an effective leader of the party, holding together the various wings of the GOP. Today, the Republicans are divided along a number of fault lines, with no clear, unifying voice able to mediate the party's internal strife.

One thing the 2016 election does share with the 1992 election, however, is the presence of an insurgent populist in the GOP primary who makes the Republican establishment very anxious.

Before Donald Trump, there was Pat Buchanan.

The former presidential advisor to Richard Nixon campaigned hard against his party's incumbent in 1992, earning support from working class conservatives and the religious right with his criticism of U.S. trade policy and his stark moral traditionalism. Like Trump, Buchanan was accused by critics of practicing dog-whistle politics - stoking racial resentment to court the white working class.

Buchanan did not win any states in the GOP primary, but he turned in a strong showing in New Hampshire - earning 37 percent to Bush's 53 percent - that revealed significant disquiet about Bush among the GOP rank and file and presaged difficulty for the incumbent in the fall.

Ahead of the New Hampshire primary in 1992, "Face the Nation" spoke with Pat Buchanan about his campaign and his vision for the country. The similarities between Buchanan's message and Trump's message are striking.

Buchanan stressed the need to "make America first again" (sound familiar?) by reviving manufacturing and heavy industry. He warned that "the Japanese" are undermining the American economy by besting the U.S. in international trade. He outlined an economic vision that he called "much more dramatic" than anything being proposed by Bush, deriding the incumbent's plans as "Mickey Mouse."

Perhaps the most obvious connection between Trump and Buchanan, though, is their similarly pugilistic approach to the practice of politics.

"There is no substitute for a president who will fight," Buchanan explained in 1992. "They know that in the crunch, when it comes to politics in Washington, D.C., George Bush will not fight. And I think they know Pat Buchanan will."

Many things have been said about Donald Trump during the 2016 campaign - that he shies away from a fight is not one of them.

For the latest on the 2016 campaign and the impending New Hampshire primary, tune into "Face the Nation" this Sunday. Check your local listings for airtimes.