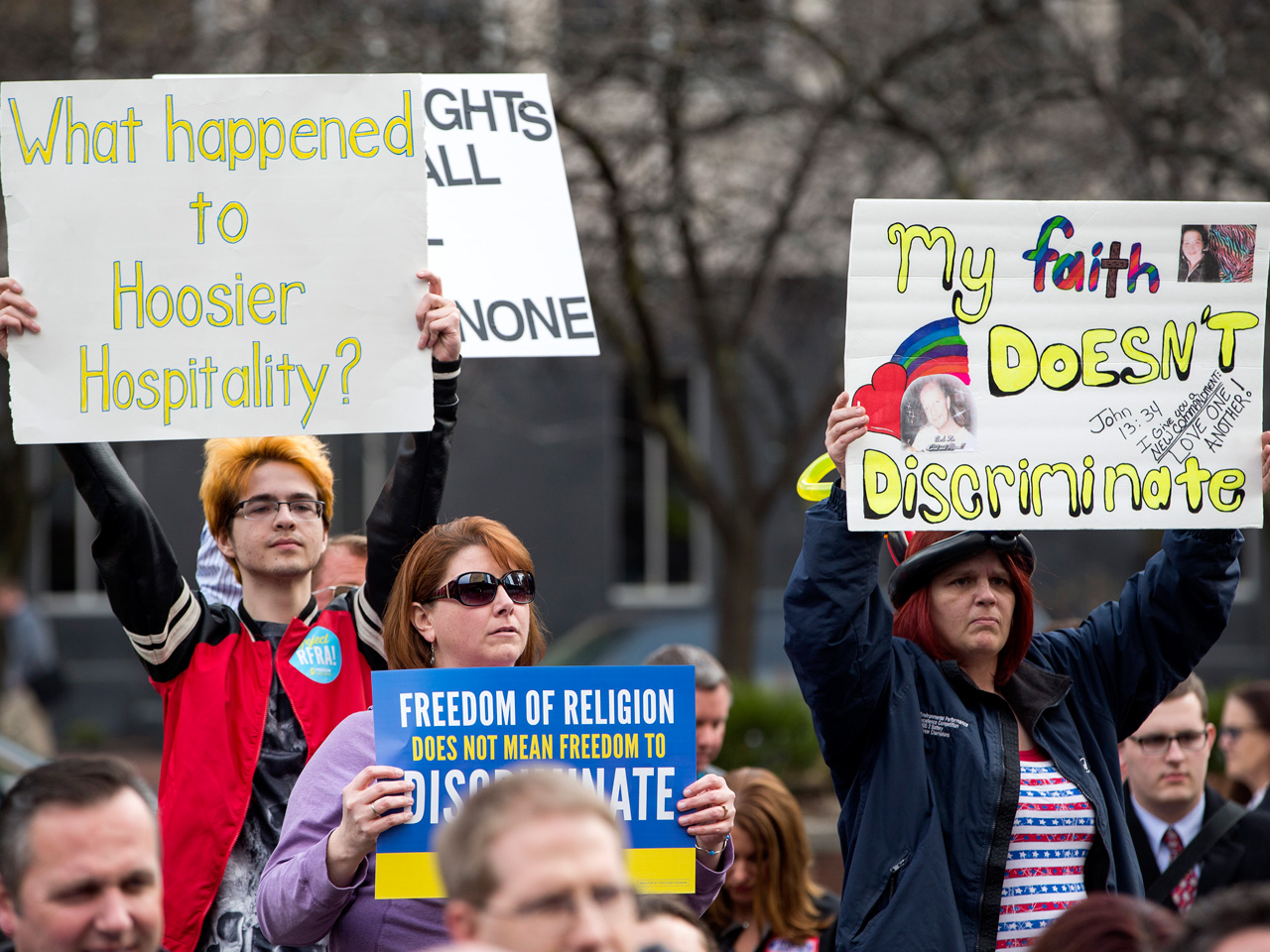 INDIANAPOLIS - Whichever city is fortunate enough to host the NCAA men's basketball Final Four normally gets to use the opportunity to promote and further its image as a great place to live, work and visit. Indianapolis, however, was forced to use the weekend largely for damage control.

Downtown Indianapolis businesses rolled out a campaign this weekend designed to show the thousands flocking there for the basketball games that they are more tolerant than the state's controversial religious freedom law might suggest.

CBS affiliate WISH-TV in Indianapolis reports free t-shirts with "Indy Welcomes All" printed on them were given away in the downtown area all weekend.

An uproar sparked by fears that the law would allow discrimination against gays and lesbians led a few convention organizers and performers to cancel events and some state and local governments to ban travel to the state last week. Revisions to the law's language have eased some of the criticism, but experts say the state could be dealing with a damaged reputation for years to come.

Lawmakers and community leaders acknowledge they have work to do but say the state will recover.

If history is any indication, they're likely right.

Arizona battled a similar public relations crisis in 1987, when former Gov. Evan Mecham sparked an outcry when he rescinded Martin Luther King Jr. Day as a paid holiday. The fallout, which included losing a bid to host the 1993 Super Bowl and a boycott of tourism and convention sites for much of the late 1980s, severely damaged the state's image for years.

In 1992, an initiative to restore Martin Luther King Jr. Day in Arizona was approved, making it the first state with a voter-approved King holiday. The state has hosted three Super Bowls since then.

In a sign that Indiana is under close scrutiny despite the law's revisions, hundreds of gay rights supporters marched to the site of the NCAA Final Four on Saturday as college basketball fans were arriving for the games. The marches called for the state to go further and enshrine in its civil rights law protection for gays and lesbians.

Chris Gahl, vice president of Visit Indy, the lead promoter for Indianapolis, said he has been in "full crisis mode" since the furor erupted after Gov. Mike Pence signed the law late last month.

Gahl said Visit Indy received more than 800 emails from people saying they were canceling trips for events such as the Indianapolis 500 or choosing a different vacation destination. The agency has been scrambling to prevent groups and businesses from either pulling out of negotiations for future conventions or canceling upcoming events altogether.

Two groups, including the public employee union AFSCME, have canceled conventions, and Gahl said two others were on the fence. He put the economic impact of those events at a "healthy eight figures."

"What keeps us up at night is the fact that 75,000 people depend on tourism for a paycheck," Gahl said. "And if we don't fill the city with conventions and visitors, they don't work."

The crisis isn't confined to Indianapolis. Fort Wayne, the state's second-largest city, has had six national conventions express concerns about continuing business in Indiana. If all six pulled out, it would represent about $1.2 million in revenue, said Dan O'Connell, president and CEO of Visit Fort Wayne.

Businesses say they've been inundated with emails from people asking for reassurance that they are welcome in Indiana, or canceling orders or plans. The famed French Lick Resort, a hotel in an historic town in southern Indiana, issued a statement Friday saying it has "always been open and inclusive" and that the new law won't change that.

Traci Bratton, owner of the Hoosier Candle Company in Dayton, about 50 miles northwest of Indianapolis, said she's received emails from out-of-state customers who like her products but say they won't be bringing their business to Indiana because of the law.

"Hoosier Hospitality has been thrown out the window," Bratton said.

But the impact is being most keenly felt in Indianapolis, which has earned national praise for its transformation from a place once referred to as "Naptown" and "India-No-Place" to a vibrant, friendly city that used sports and a downtown renaissance to land a Super Bowl and become a popular pit stop in what was once called "flyover country."

Indy Big Data, a tech convention slated for May, has lost nine national sponsors, including Amazon and Cloudera. GenCon, the city's largest convention, has a contract with the city until 2020, but Gahl said negotiations to extend the agreement for another five years could fall through because of the outcry over the law. A departure of GenCon, which brings in about $56 million each year, would be a huge loss, Gahl said.

Angie's List CEO Bill Oesterle said in a statement Thursday they were not satisfied with the law's changes.

Even though lawmakers have revised the language of the religious objections law to make clear that it's not intended to discriminate, Indiana still lacks statewide civil-rights protections for the gay and lesbian community. And economic experts said perceptions about the law could prevent companies from attracting and retaining young talent.

Kyle Anderson, a business economics professor at Indiana University said Indiana already had a hard time competing on a national level to bring in top talent. For young professionals who tend to be more progressive about social issues, the law could be another reason for them to avoid jobs within the state.

"The last week will perpetuate the notion that it's not a great place to live," he said. "And I think that will live on for quite a while, unfortunately."