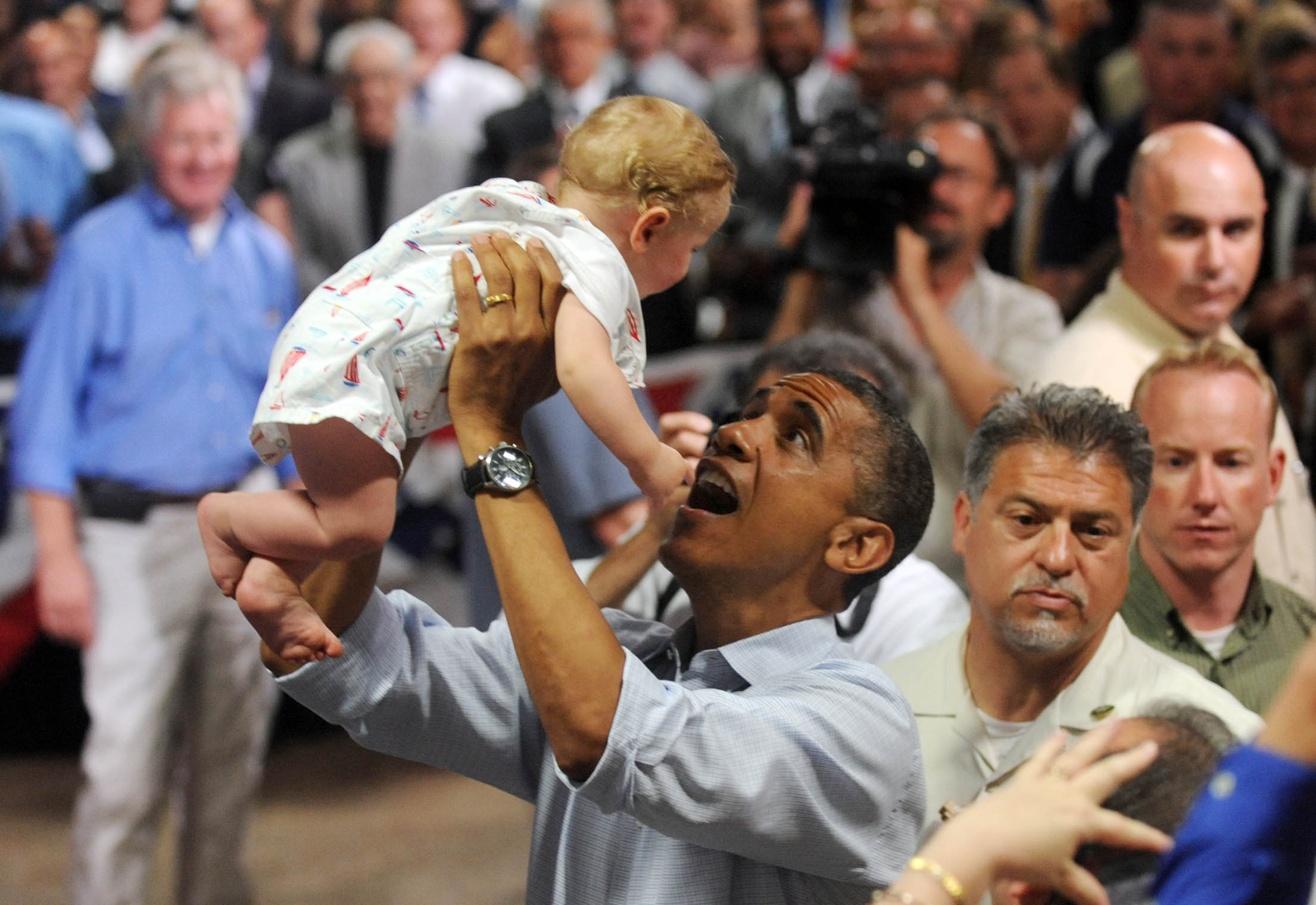 (CBS News) POLAND, Ohio - Candidate Barack Obama tells a compelling story about the American middle-class dream. In shirtsleeves in the town square in Sandusky, Ohio, and at twilight in Parma, he explains how the theory at the heart of most of American life - that hard work and responsibility will lead to prosperity - is under threat. His audiences during his two-day bus tour are attentive. When they hear him speak, some say, "Amen." Others repeat his last word out loud, as if to affirm its truth. A man in Poland raised his hand as if in prayer, but most keep both hands raised to film him on their cell phones.

The call-and-response might make it feel like a church service, but the candidate is not speaking to his audience; he is speaking from it. He is one of them, he says, which is why he understands this threat to their way of life. "I believe in that basic promise of America because I lived it. That's my biography," he said amid the hay bales and a large American flag in Maumee, Ohio, on Thursday. At the end of the day, he said, "I saw myself in you. I saw my hopes and dreams in you. And when I see your kids, I see my kids. And when I see your grandparents, I see my grandparents."

This guy may really have a shot against the incumbent.

Barack Obama's pitch that he should be re-elected as the protector of the middle class is so skillful one might forget that a plurality of voters say their lives have gotten worse since he took office. The tension between Barack Obama the campaigner and Barack Obama the sitting president was on full display during his bus tour through Ohio on Thursday and Friday. He is a talented orator, and the middle-class audiences - selected by his impressive state organization - echoed his pitch with wild enthusiasm for the local television stations and Obama's ad-makers who were capturing every moment. On the other hand, as the trip came to an end, the president had to contend with another tepid jobs report. Only 84,000 jobs were created in June. For the last three months, the average job growth has been 75,000, barely half what is needed to keep up with population growth.

Barack Obama has not gotten the job done. For more than 41 weeks, the unemployment rate has been over 8 percent. Mitt Romney is running as the guy who can get the job done. He has had enough success turning around companies and staging the Olympics that a weary nation looking for some hope might try electing a candidate with that kind of resume.

That is the grim reality back on display in Ohio Friday. The president's strategy, laid out over the last two days, was to explain how Republican single-minded obstructionism and the depth of the recession have limited what he has been able to accomplish. At the same time, his message carried a warning: If voters choose Mitt Romney, they would be returning to the policies that had helped create that recession and picking a candidate who wouldn't be thinking about them when he took office.

The pitch was personal. At each stop, the president talked about how his grandparents had achieved the American Dream with government help. His father had fought in World War II and gone back to college on the G.I. Bill. His grandmother had helped build bombers. He mused about a trip around the country he took as a boy riding Greyhound buses and trains. They stayed in Howard Johnsons, where he never left the pool and thought getting ice from an ice machine was the greatest thing ever.

This life, said the president, was built on a "simple bargain," that if you played by the rules you'd be OK. That bargain sustained the middle class and led to broad prosperity. Now that bargain is in danger, said Obama, either by the forces of change that have exposed people without health insurance or by the rising cost of college tuition.

It is up to government to strengthen the bargain for the middle class, which is where Obama's argument turned personal again. The other party doesn't care about the middle class. The president argued that Republicans have an economic model that doesn't work: Lower taxes and reduced regulation won't protect the middle class.

But there is a sharper-edged version of his message: You're going to be the victim. Gov. Romney's policies won't work and they certainly won't work for you. "We've got a stalemate in Washington," said the president, framing the choice of the election. "We've got two fundamentally different ideas about where we should take the country. And this election is about how we break that stalemate. And the good news is it's in your power to break this stalemate. It's in the power of everybody who lives in Ohio, everybody who lives in Poland, everybody who lives all across the Midwest - all those folks out there, whether you're punching a clock or starting a business, you've got a chance to move this country forward. But you're going to have to make a choice about which direction we go in."

If Barack Obama knows middle-class voters because he has lived their life, then his campaign also would like voters to believe the opposite: Mitt Romney's wealth and privilege must mean that he can't possibly understand how regular people live.

In Ohio this week, this message was more the subtext than an overt attack. Neither the president nor any of his surrogates made any cracks about Mitt Romney's vacation this week or his gleaming water vehicle. But former Ohio Gov. Ted Strickland did attack Romney for his personal bank accounts in off-shore locations as a way to show how little he had in common with middle-class voters.

The president revealed his sharper elbows during a local interview, saying that Romney's recent change in his position on the individual mandate was a cave to his party's right wing. "One of the things that you learn as president is that what you say matters and your principles matter. And sometimes, you've got to fight for things that you believe in and you can't just switch on a dime." The Romney camp accused the president of the same failing. (To figure out where the two stand on this for yourself, read here and here).

But the president stayed on message, saying that shoring up the middle-class bargain is what got him into politics. He said this would be his last campaign ever. Throughout his career and as president, he argued, he had been fighting for families like those nodding in agreement under the shade trees. At the stop in Sandusky, a woman thanked the president for his health care law on behalf of her sister who had been unable to get insurance and died.

If there was a place for Obama to receive a bad unemployment report, northeastern Ohio is probably it. It is friendly territory for Democrats. In Ohio, the president could also point to significant domestic achievements, like his support for the auto bailout. At each stop, a plant worker who had been unemployed but later found work, introduced the president, praising him for "betting on America" by supporting the car companies. The president had started his tour outside of Toledo the day before, where he announced that the administration was filing a trade complaint against China's new duties on some American made cars, including the Jeep Wrangler which is made in - wait for it - Toledo.

Mitt Romney did not support the bailout, which means the issue does double duty for the president. He can point to a job-creating achievement and he can make a clear distinction with his opponent. Ohio is a must-win for the Romney campaign. If President Obama wins Ohio and carries the states John Kerry did in 2004 (pretty likely), he'll have 264 electoral votes, just six shy of the magic 270 threshold. There are five other states he won in 2008 - Virginia, Colorado, New Mexico, Florida, and Iowa - any one of which could then provide him with the margin for victory.

At times, it feels like the entire campaign might shrink down to a debate about the auto bailout in Ohio. If the president can make his case, despite the fog horn of a sluggish economy, then he really will be like his audience: someone whose job was in danger but saved by the bailout.

Thaddeus McCotter Resigns, and a Nation Enters a Lengthy Period of Mourning and Reflection
Where Is the Liberal Outrage?
Shrimp Fork Diplomacy