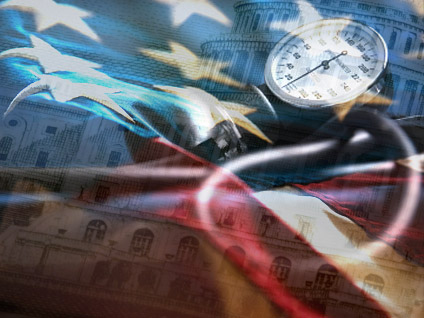 (CBS News) A majority of voters in the crucial battleground states of Florida, Wisconsin and Ohio say the economy and health care are "extremely important" issues with regard to how they will cast their votes this fall, according to a new Quinnipiac University/CBS News/New York Times poll.

The survey, conducted from August 15-21, suggests that voters in all three states consider the economy the most important issue in this election: 60 percent of likely voters characterized that issue as "extremely important" in Florida, while 59 percent in Ohio and 54 percent in Wisconsin said the same.

Health care had the second-highest proportion of voters who ranked the issue "extremely important": 56 percent of Florida voters characterized the issue that way, as did 52 percent of Ohio voters and 50 percent of Wisconsin voters.

Many voters also characterized Medicare and the budget deficit as "extremely important," while fewer said the same of taxes, foreign policy, and the housing market and foreclosures.

On these four issues, voters had more confidence in Mr. Obama than Romney on health care and Medicare, but they thought Romney would do a better job fixing the budget deficit.

Voters were more divided as to whether Mr. Obama or Romney is more equipped to handle the economy: Romney had an edge in Florida and Wisconsin, while the two are tied among Ohio voters.

In the three states, meanwhile, just over one in five voters think the law will help them personally. More than one third of those voters think it will hurt them.

The future of Medicare

Issues surrounding Medicare have become particularly prominent on the campaign trail since the addition of Republican Rep. Paul Ryan, of Wisconsin, to the GOP ticket. As the author of a controversial budget plan that would overhaul the nation's Medicare system, Ryan's entry into the race has inspired debate about what the future of Medicare should look like.

As a member of Congress, Ryan proposed privatizing Medicare for those under the age of 55 while providing them with a fixed amount of money towards purchasing health insurance. Majorities of voters in all three states say they prefer a system in which Medicare would continue as it is today, with the government providing seniors with health insurance.

Overall, most voters have a positive view of the current Medicare system: In each state, three in four think Medicare benefits are worth the cost of the program to taxpayers. Still, most voters in Ohio, Florida and Wisconsin would support some reductions to Medicare in order to reduce the federal budget deficit. Only about one in 10, however, would support major reductions to the system for the same purpose.

Despite ongoing controversy surrounding a slew of strict new voter ID laws, a majority of voters in Ohio, Wisconsin and Florida say changes in their state's voting rules won't affect their eligibility to vote, and most likely voters in all three states support requiring voters to show a photo ID Card to vote.

About one in 10 likely voters in these three states say changes to voting and registration rules will make it harder for them to vote.

But certain groups of voters have higher expectations that they will be adversely affected by the new voting laws than others. Roughly one in five Democrats in Ohio and Florida expect it will be harder for them to vote. Twenty-five percent of African-American voters in Ohio and 20 percent in Florida say the same.

A little more than one in four Florida voters also suspect that a recent effort by the state to rid non-citizens from the voter rolls was driven by political motivations: 68 percent of all Florida voters say they think the voter purge is an effort aimed at preventing ineligible people from voting, while 28 percent say it is an effort to suppress voting by certain groups.

Democrats (53 percent) are more likely to believe that the purge is driven by a desire to suppress the votes of certain demographics, while Republicans overwhelmingly say the effort is an attempt to rid the rolls of ineligible voters. African-American voters are divided on the issue, with 44 percent citing an attempt to suppress voting, and 46 percent pointing to a desire to prevent ineligible people from voting.

The state of the Senate races

Ohio, Florida and Wisconsin are all home to contentious Senate races in the upcoming election. In Wisconsin, former Governor Tommy Thompson has clinched the Republican nomination and now leads Congresswoman Tammy Baldwin 50 percent to 44 percent in a head-to-head match-up. In Florida and Ohio, however, the Democratic candidates for Senate lead the Republicans - similar to findings earlier in August.