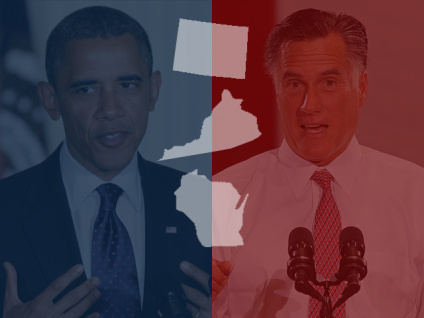 Romney is ahead of the president in the swing state of Colorado, 50 percent to 45 percent. The poll shows a key part of Mr. Obama's Colorado coalition from 2008 -- college-educated white voters - in play this year.

Mr. Obama, meanwhile, leads Romney in Virginia, 49 percent to 45 percent, thanks in part to strong support from women and black voters.

In a third important state, Wisconsin, Mr. Obama has a 6-point lead over Romney, 51 percent to 45.

Now, however, white voters in the state back Romney, 54 percent to 41 percent. Romney even wins the support of white college graduates, with 49 percent support to Mr. Obama's 46 percent. The three-point lead is within the poll's margin of error.

There are age and gender gaps: men favor Romney over Mr. Obama by 17 points, while women favor the president by 8 points. Independents are divided. A majority of voters under 35 support Mr. Obama, while Romney leads among those age 36 and over.

Two thirds of Hispanic likely voters - who make up about one in 10 likely voters in the state - support the president, giving him 40-point lead over Romney among Hispanics.

In 2008 Mr. Obama won both men and women in Virginia, but as in Colorado, there's now a significant gender gap there.

Mr. Obama leads by 14 points among Virginia's women, 54 percent to 40 percent. He trails Romney among men, 50 percent to 45 percent.

There are sizeable age differences in the Old Dominion, too: Mr. Obama leads among voters under 64, while Romney wins among those 65 and older.

Romney has a seven-point lead among independents in Virginia, and he also leads by seven points among military families. Fifty-seven percent of white voters support Romney, and that support grows to 63 percent among white voters with no college degree. Black voters, meanwhile, overwhelmingly support Mr. Obama over Romney (93 percent to 1 percent).

In Wisconsin, Mr. Obama holds a commanding, 23-point lead among women. Romney, however, leads among men by 10 points, even though Mr. Obama won the support of men by seven points in 2008.

Union households, who make up a quarter of likely Wisconsin voters, support Mr. Obama by nearly two-to-one (61 percent to 36 percent).

Independent voters are divided, as are white voters. Mr. Obama does well among Wisconsin's white voters with college degrees, but Romney holds an edge among those without a degree.

Unlike in Colorado and Virginia, the president runs even among voters over 65 in Wisconsin (as he did in 2008).

There is a little room for movement in the race in all three states, but not much. About nine in 10 voters in each of the three states say their mind is made up.

Mr. Obama continues to lead Mitt Romney as the candidate who cares: majorities of voters in each of these three states say Mr. Obama cares about their needs and problems. In Virginia, as many as 59 percent of voters say so.

Overall views of the candidates reflect the state of the race: in Colorado, Romney is seen marginally favorably while Barack Obama is seen slightly unfavorably. In Wisconsin and Virginia, more than half view him favorably, while views of Romney are mixed.

Wisconsin is the only one of the three states where a majority approves of Mr. Obama's job performance so far. In Colorado, where he is trailing Romney, a majority disapproves.

The economy and other issues

Voters in all three states - and especially in Colorado - are more apt to say that the president's economic policies will hurt them financially rather than help them.

Voters are not necessarily enthusiastic about Romney's past experience in the private sector. In Wisconsin and Virginia, more think Romney's business background was too focused on making profits instead of creating jobs (48 percent in Wisconsin, 47 percent in Virginia). In Colorado, more voters (48 percent) think his background was the right kind of experience to create jobs.

The economy is the most important issue to likely voters in each of these battleground states, with health care a distant second.

In Colorado voters give Romney a clear edge on handling the economy, 51 percent to 41 percent.

Mr. Obama has the edge on handling the issue of health care in all three states. Colorado's voters think Romney would do a better job on national security; in Virginia and Wisconsin, more think Mr. Obama would do better.

When it comes to the Bush-era tax cuts, voters in these three states agree with Mr. Obama: Most voters in Colorado, Virginia, and Wisconsin support raising taxes on households earning more than $250,000 a year.

Sizeable majorities of voters in these states say they have seen television ads for both candidates - particularly in Colorado and Virginia - and more voters say those ads have mostly attacked the other candidate.

The governors of all three battleground states are enjoying wide support from likely voters. Colorado's Democratic Gov. John Hickenlooper receives the highest approval rating from his constituents, with 66 percent. This poll was taken after last month's mass shooting at an Aurora, Colo., movie theater, after which Hickenlooper was a very visible presence in Colorado and on national TV.

In Virginia, the Senate race between two former governors - Democrat Tim Kaine and Republican George Allen - is neck and neck, with Kaine getting 48 percent of the vote and Allen 46 percent.

Full poll results on next page

This poll was conducted by telephone from Quinnipiac University's interviewing facility July 31-August 6, 2012. The number of likely voters interviewed in each state is 1,463 in Colorado, 1,412 in Virginia and 1,428 in Wisconsin. In all three states, phone numbers were dialed from samples of both standard land-line and cell phones. The error due to sampling for results based on the sample in each state could be plus or minus three percentage points in Colorado, Virginia, and in Wisconsin. The error for subgroups may be higher. This poll release conforms to the Standards of Disclosure of the National Council on Public Poll.