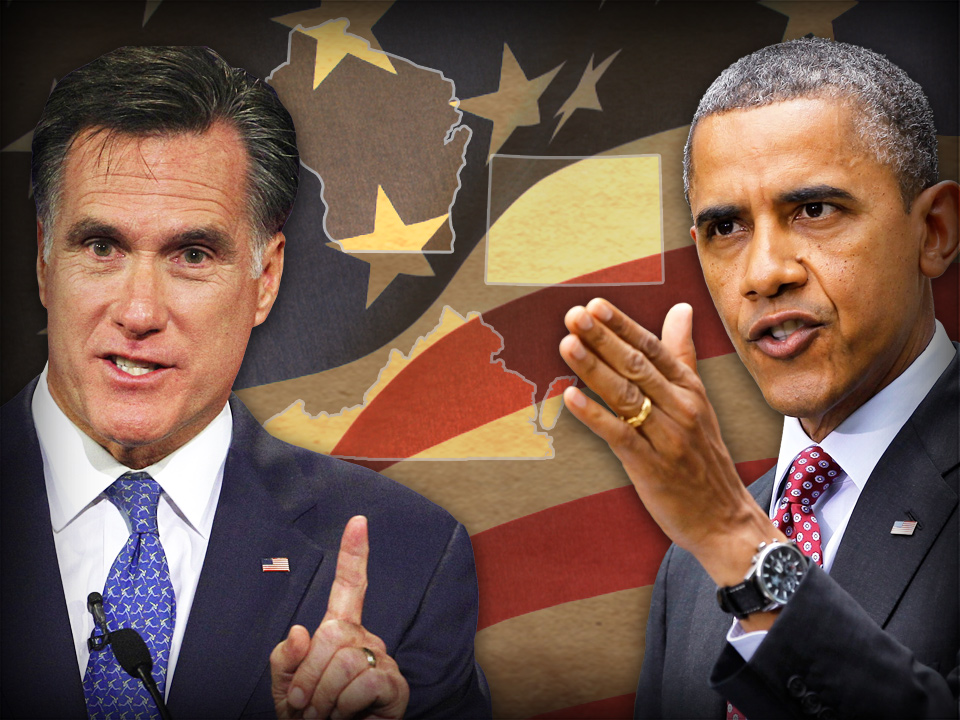 In Virginia, Mr. Obama leads Romney 50 percent to 46 percent, matching his four-point lead from August. Mr. Obama took the state by seven points four years ago, making him the first Democrat to carry it since 1964.

In Colorado, the survey found Mr. Obama holds a one-point lead, 48 percent to 47 percent. That's within the survey's three-point margin of error. In the August survey, Romney led the president by five points in Colorado.

The survey found that Mr. Obama has gained some ground on the issue of the economy - where Romney has until now held an advantage.

The Candidates on the Issues: Domestic and Foreign

The president has gained some ground on handling the economy since last month. In August, Romney had an advantage on this issue (including a 10-point lead on it Colorado), but the candidates are now running much closer. In Colorado, 48 percent of voters think Romney will handle the economy better compared to 47 percent for Mr. Obama. In Virginia and Wisconsin, Mr. Obama has a 49-47 percent and 49-46 percent edge respectively on the economy issue.

Amid the protests and violence in the Middle East, likely voters in all three of these battlegrounds see Mr. Obama as the candidate who would best handle an international crisis - 50-43 percent in Colorado, 53-42 percent in Virginia and 53-41 percent in Wisconsin. He also has an advantage over Romney in both Virginia and Wisconsin on national security and terrorism - 51-44 percent in Virginia and 50-43 percent in Wisconsin - and a two-point edge over Romney on the issue in Colorado, 48-46 percent. In last month's Colorado poll, Romney beat the president on the issue of national security, 50 percent to 41 percent.

As he did a month ago, Mr. Obama leads Mitt Romney as the candidate who cares: majorities of voters in each of these three states say Mr. Obama cares about their needs and problems.

In Colorado, Mr. Obama has caught up with Romney largely by making inroads among men. The President still trails Romney among men by nine points, 52-43 percent, but this is down from 17 points a month ago, and he maintains his lead with women voters.

White voters continue to favor Romney, his support comes largely from those without a college degree. Hispanics - who make up about one in ten likely voters in this poll - favor Mr. Obama by two to one.

The president leads Romney among younger voters and blacks, while Romney is getting the support of seniors and independents.

Mr. Obama does well among Wisconsin's white voters with college degrees, 53-45 percent, but Romney holds a slight edge among those without a degree, 49-46 percent. Mr. Obama is favored among union households (about a quarter of likely voters in this poll) by more than two-to-one.

The president has a 19-point lead among voters 35 and under, 56-37 percent, but he now also leads among voters 65 and over by seven points, 52-45 percent. Previously, the two candidates were running even among Wisconsin's seniors.

Voter Enthusiasm and Strength of Support

Likely voters in Colorado, Virginia, and Wisconsin paid attention to both the Republican and Democratic conventions, with nearly three in four likely voters watching each convention. Those who watched the conventions came away with more positive rather than negative impressions of each candidate.

Likely voters in Colorado and Virginia and also divided in their opinions of Republican vice presidential nominee Paul Ryan, and a quarter haven't heard enough about Ryan to have an opinion. Ryan is better-known in Wisconsin, his home state, and is perceived more favorably by voters there. Opinions of Joe Biden are more negative than positive in Colorado and Wisconsin and split in Virginia.

Voters in each state are more likely now than they were in August to say the president's policies are currently improving the nation's economy.

Still, voters in these battlegrounds are more likely to say the U.S. is worse off compared to four years ago rather than better off.

When asked about their own families, four in 10 say their families are about the same compared to four years ago. In Wisconsin and Colorado more say they are worse off than better off, while Virginia voters are more divided.

This poll was conducted by telephone from Quinnipiac University's interviewing facility September 11-17, 2012. The number of likely voters interviewed in each state is 1,497 in Colorado, 1,474 in Virginia and 1,485 in Wisconsin. In all three states, phone numbers were dialed from samples of both standard land-line and cell phones. The error due to sampling for results based on the sample in each state could be plus or minus three percentage points in Colorado, Virginia, and in Wisconsin. The error for subgroups may be higher. This poll release conforms to the Standards of Disclosure of the National Council on Public Polls.