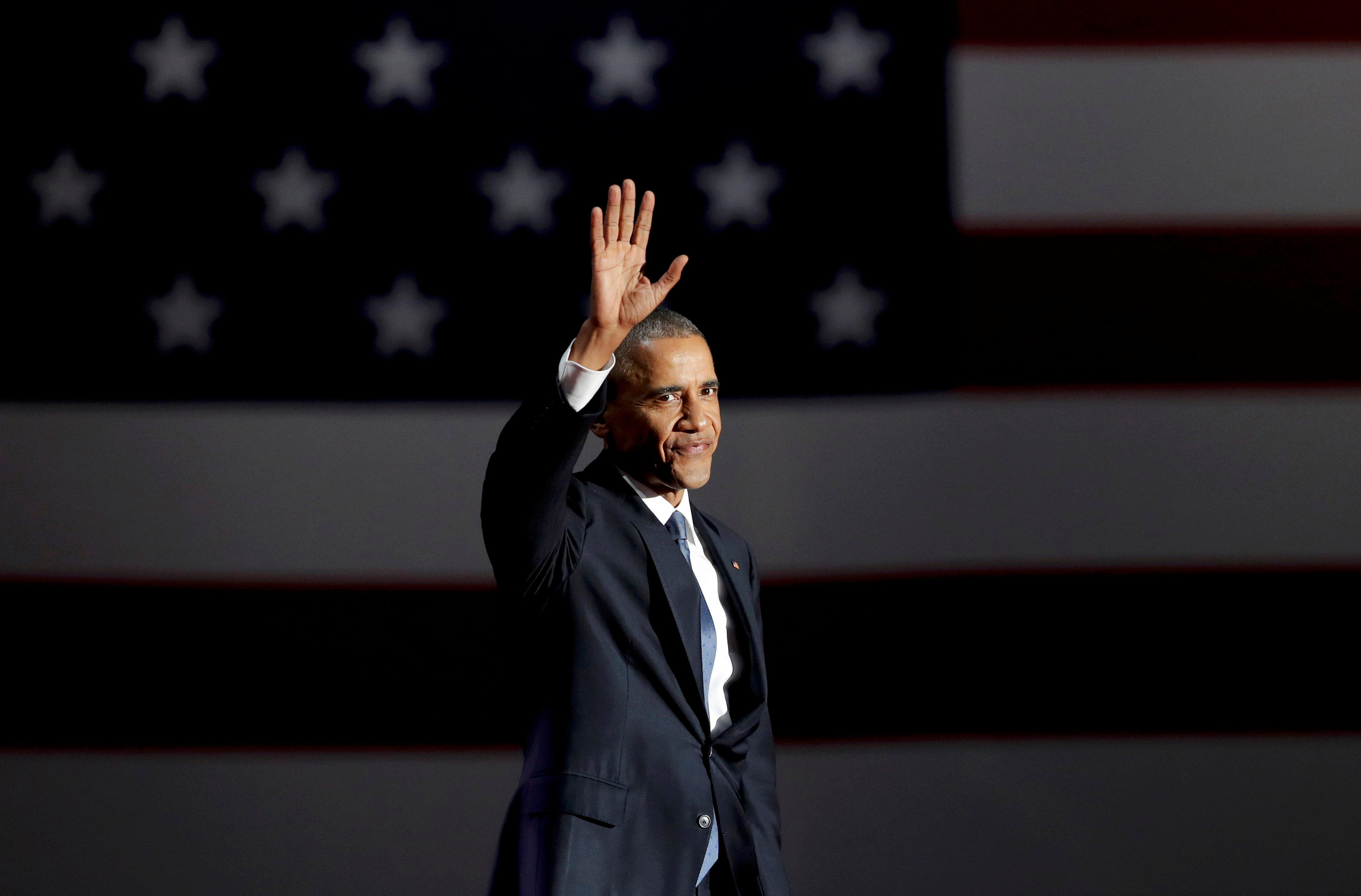 With just ten days remaining in his presidency, President Obama on Tuesday night outlined his achievements in the White House and told Americans that U.S. democracy is under threat.

In his almost hour-long speech, a visibly emotional Mr. Obama argued that the country is at a pivotal point in its history -- and that forces beyond our control are threatening American democracy. What will keep the country together, he said, is a sense of “solidarity.”

The speech seemed at times squarely aimed at his successor, President-elect Donald Trump -- despite the fact that Mr. Obama said Mr. Trump’s name just one time.

“There have been moments throughout our history that threatened to rupture that solidarity -- the beginning of this century has been one of those times,” he said. “A shrinking world, growing inequality; demographic change and the specter of terrorism – these forces haven’t just tested our security and prosperity, but they’re testing our democracy as well.”

Mr. Obama acknowledged the tradition of a peaceful transition of power, saying he was committed to making it the “smoothest possible.”

“In ten days, the world will witness a hallmark of our democracy: the peaceful transfer of power from one freely-elected president to the next,” he said, to boos from the crowd. “I committed to President-elect Trump that my administration would ensure the smoothest possible transition, just as President Bush did for me.”

He said it’s normal and understandable for people to disagree on the best path forward for the country -- but outlined three potent forces working to challenge American democracy that will require unity of purpose going forward.

One major threat, he said, is that of rising economic inequality and concern that government “only serves the interests of the powerful.”

“Our economy doesn’t work as well or grow as fast when a few prosper at the expense of a growing middle class and ladders for folks that want to get into the middle class,” he said. “But stark inequality is also corrosive to our democratic principles.”

The second major threat to American democracy, Mr. Obama said, is the growing tension over race and diversity in the country.

“After my election, there was talk of a post-racial America,” he said. “Such a vision, however well-intended, was never realistic -- for race remains a potent and often divisive force in our society.”

Quoting “To Kill A Mockingbird’s” Atticus Finch, Mr. Obama said people of all races must consider the positions and lives of others in order to be a truly unified society.

“Regardless of the station we occupy, we all have to try harder,” he said. “We all have to start with the premise that each of our fellow citizens loves this country just as much as we do, that they value hard work and family just like we do, that their children are just as curious and hopeful and worthy of love as our own.”

And third, he said, American democracy is challenged by the fact that people are retreating further and further into their own respective “bubbles” of experience and opinion.

“Politics is a battle of ideas: in the course of a healthy debate, we’ll prioritize different goals, and the different means of reaching them,” he said. “But without some common baseline of facts, without a willingness to admit new information, and concede that your opponent is making a fair point, and that science and reason matter -- then we’re going to keep talking past each other, making common ground and compromise impossible.”

Mr. Obama spoke about the advances made on issues of national security and the fight against terrorism, noting that under his watch, the country has eliminated torture, worked to close the Guantanamo Bay detention center and killed terrorist Osama bin Laden. In addition, he said, no terrorist group has managed to pull off an attack on U.S. soil since he took office.

“No foreign terrorist organization has successfully planned and executed an attack on our homeland these past eight years,” he said. “And although Boston and Orlando remind us of how dangerous radicalization can be, our law enforcement agencies are more effective and vigilant than ever. We’ve taken out tens of thousands of terrorists – including bin Laden.”

Still, he cautioned against the desire to “withdraw from global fights,” an implicit nod to Mr. Trump’s “America First” tagline.

Mr. Obama nodded to George Washington’s 1796 farewell address, in which he cautioned against forces that aim to “weaken” the United States’ democratic aims.

“It falls to each of us to be those anxious, jealous guardians of our democracy, to embrace the joyous task we’ve been given to continually try to improve this great nation of ours,” he said. “Because for all our outward differences, we in fact all share the same proud title: the most important office in a democracy, citizen.”

And seemingly speaking to those who are disappointed in the results of the 2016 election, Mr. Obama encouraged people to get involved and stay involved when they see something they believe needs to be changed.

“If you’re tired of arguing with strangers on the internet, try to talk with one in real life,” he said. “If something needs fixing, lace up your shoes and do some organizing. If you’re disappointed by your elected officials, grab a clipboard, get some signatures, and run for office yourself.”

To Michelle Obama, he said his wife has been not just a wife and mother but “my best friend.” “You made the White House a place that belongs to everybody,” he said. “And a new generation sets its sights higher because it has you as a role model.”

As for his daughters, Sasha and Malia, Mr. Obama said they “wore the burden of years in the spotlight so easily.” Sasha was absent from the speech.

He also thanked Vice President Joe Biden, saying choosing him as a running mate is the first and “best” decision he made in 2008 and saying that he considers Biden a “brother.”

At the end of his speech, Mr. Obama came back to the words that became a rallying cry for his 2008 campaign: “Yes We Can.”

“I am asking you to hold fast to that faith written into our founding documents; that idea whispered by slaves and abolitionists, that spirit sung by immigrants and homesteaders and those who marched for justice, that creed reaffirmed by those who planted flags from foreign battlefields to the surface of the moon, a creed at the core of every American whose story is not yet written,” he said.