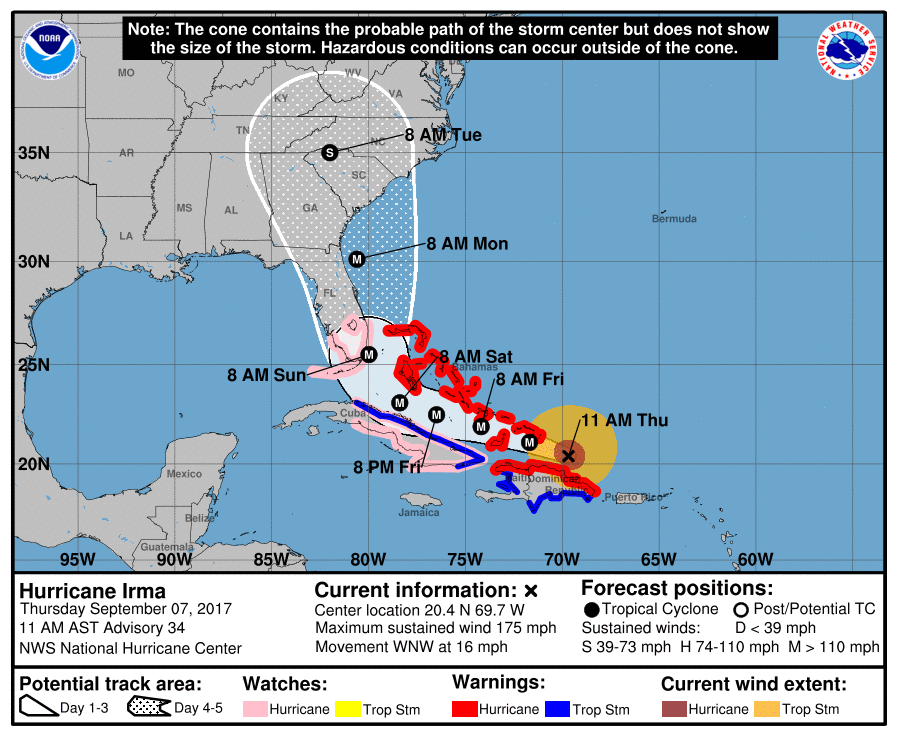 A hurricane watch is now in effect for the Florida Keys and parts of South Florida.

The U.S. Hurricane Center in Miami says a watch has been issued for the Florida Keys, and on the South Florida mainland from Jupiter Inlet southward and around the peninsula to Bonita Beach.

Gimenez tweeted a map of evacuation orders for zones A, B and parts of C.

Gov. Rick Scott had a stark warning Thursday for anyone who wants to defy a mandatory evacuation order ahead of Irma. He said: "If you live in any evacuation zones and you're still at home, LEAVE!"

Scott said he "cannot stress this enough. Do not ignore evacuation orders. You rebuild your home ... you cannot recreate your family."

And this: "Do not try to ride out this storm," he said. The time to leave is now, because he said "we can't save you once the storm hits."

The center noted that Hurricane Irma was still an "extremely dangerous" Category 5 hurricane, although its winds had decreased slightly from 180 mph to 175 mph.

According to the National Hurricane Center, the latest advisory, released at 11 a.m. Thursday, shows Irma with sustained winds of 175 mph and traveling to the west-northwest at 16 mph.

The hurricane was headed for the Turks and Caicos Islands on Thursday.

The Hurricane Center has predicted that Irma will remain at Category 4 or 5 for the next day or two as it passes the Turks and Caicos, parts of the Bahamas by Thursday night, and skirts Cuba on Friday night into Saturday.

It will then likely head north toward Florida, where people were rushing to board up homes, fill cars with gasoline and find a route to safety.

Scott is also urging all gas stations in Florida to stay open as long as possible to accommodate evacuees.

Scott even announced at his midday Thursday news conference that police escorts will get gas station employees out safely if necessary just ahead of Hurricane Irma.

He said authorities were already escorting fuel tankers through traffic and to gas stations as quickly as possible.

Scott said all of the state's ports are still operating, bringing in fuel and supplies.

He urged residents to take only as much gas as they need to make sure there is enough for everyone who needs it.