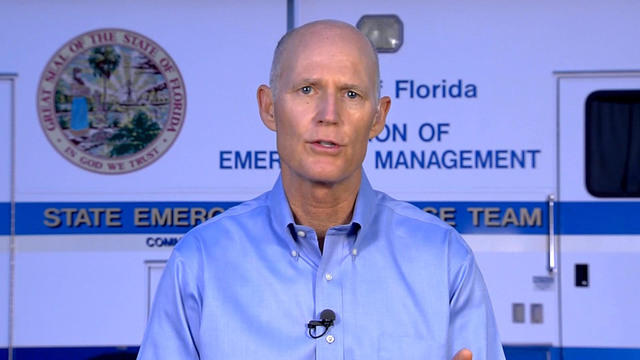 Florida is nervously tracking the most powerful hurricane ever recorded in the Atlantic Ocean. Forecasts predict Hurricane Irma – large enough to cover the entire state -- will hit Florida one way or another this weekend.

"You've got to listen to your local officials -- this storm surge can kill you," Scott said. "My biggest concern is people don't understand the amount of potential storm surge. This can cover homes. And we just haven't seen this. We didn't see this in Andrew."

Scott said he spoke with Energy Secretary Rick Perry on Wednesday about getting more fuel to areas in Florida plagued by shortages and long lines at the pump.

"We're doing everything we can to get gas into these stations so people can evacuate," Scott said. At a news conference Thursday morning, he said he's directed state police to escort fuel trucks to gas stations along evacuation routes, and he pleaded with gas station owners to stay open as long as possible, CBS Miami reports.

With all of Florida in the cone's projected path, Scott urged residents on both coasts to prepare.

"We don't know if it's gonna hit the west coast or the east coast. So everybody's got to get ready," he said.

Right now, the governor said he's traveling around the state to help spread the message that people need to listen to their local officials for guidance on evacuations.

"I've been telling everybody you've got to listen to your local officials. If they say evacuate, get out then. Don't wait because the highways are going to get busy. We're already seeing more traffic coming through -- all the way up through [Interstate] 75 and 95 -- so get ready. Be prepared, have a plan, and get out when they say to get out."