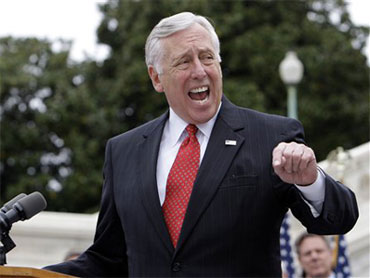 House Majority Leader Steny Hoyer Thursday strongly condemned threats leveled against House Democrats in the wake of a historic vote on health care reform and said both parties need to do a better job of keeping the debate civil.

"The bottom line is we need to be very careful in public life that our rhetoric does not turn into incitement," Hoyer told CBS' "The Early Show".

Hoyer said Wednesday that more than 10 members of Congress have received threats in the wake of the health reform vote, and the FBI and police are investigating. The chief of the Capitol Police, the Sergeant at Arms and a representative from the FBI met with members Wednesday to encourage them to report all threats.